Gov. Nathan Deal says a diversified economy, low-cost energy, enviable logistics assets and an ear for what businesses require to succeed and to expand are what separated his state from the pack in Site Selection’s annual ranking of state business climates.

o longer a bridesmaid, Georgia claims the limelight in 2013 as the state with the best business climate, according to Site Selection’s annual ranking of states’ attractiveness to corporate facility investors.

The Peach State placed fourth in last year’s ranking, second in 2011 and sixth in 2010. North Carolina, the belle of the ball for several of the publication’s Top Business Climate rankings in recent years — it finished first again last year — places second in 2013, followed by Texas, Ohio and Tennessee in the top five slots. The Southeast is once again heavily represented in the top 10, but Indiana joins the mix this year, rising from a 12th-place finish in 2012.

The ranking is based 50 percent on a survey of corporate site selectors (they ranked Georgia fourth best; Texas, South Carolina and North Carolina fared better) and 50 percent on a set of criteria that includes the states’ competitiveness rank as published in the May issue, qualified projects so far in 2013 and on a per capita basis, and state tax burdens on new and mature firms as compiled by the Tax Foundation and KPMG Location Matters analysis. Qualified projects means those that meet Site Selection’s definition: a new or expanded commercial facility of at least $1 million investment, creation of 50 or more new jobs or a minimum of 20,000 sq. ft. (1,850 sq. m.) of new space. 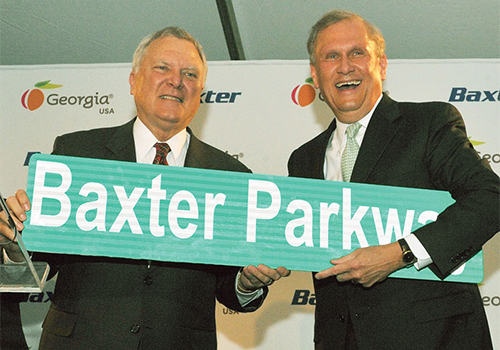 Well before Site Selection completed its state business climate analysis, several influential parties had already determined that Georgia has the best US business climate — the site-selection teams at the dozens of manufacturers, biotech companies and aerospace concerns, among others, that announced Georgia locations for their next strategic capital investment projects. These include Kubota Industrial Equipment ($73-million, 522,000-sq.-ft./48,500-sq.-m. plant in Jefferson for tractor production), Engineered Floors, LLC ($450-million, 2,000-job facilities in Whitfield and Murray Counties) and Koch Foods ($49 million, 750-job food processing facility in Hamilton).

In early 2012, Caterpillar announced a site near Athens as the location for a construction equipment plant that will employ 1,400 by 2020. Baxter International broke ground in August 2012 on a $1-billion complex near Covington that will begin producing biomedical treatments in 2018. And Porsche broke ground on its $100-million US headquarters at a former Ford Motor Co. site adjacent to Hartsfield-Jackson International Airport in November 2012. All of these projects have been covered in these pages, but they bear mention here in the context of this ranking. These companies had plenty of location options, especially in the business-friendly Southeast. They chose Georgia. 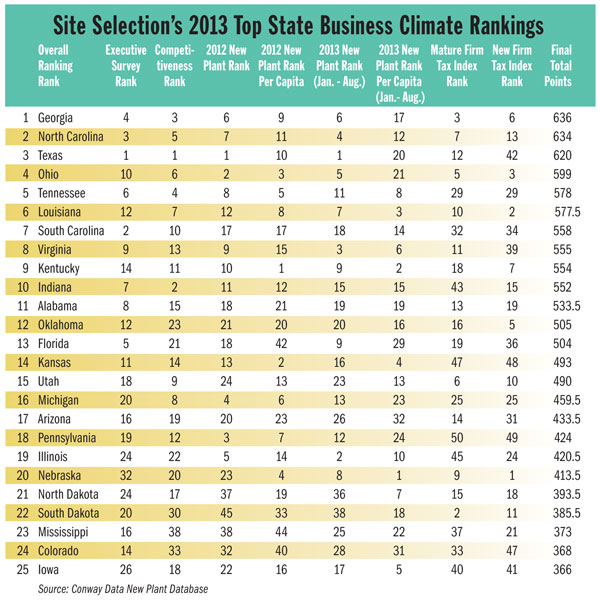 As this issue went to press, Chris Carr was preparing to assume the role of Commissioner of the Department of Economic Development, which was vacated recently by Chris Cummiskey. Carr most recently served as chief of staff to US Senator Johnny Isakson.

What Do Businesses Need?

“One of the first things I did was put in place the Competitiveness Initiative, which was an effort to ask the question all over the state of Georgia, ‘What do you think would make your region more competitive and bring more jobs?’” says Deal. Meetings of top business leaders were held in 12 regions around the state in 2011. The effort resulted in a comprehensive report issued in January 2012 that set economic development goals based on input gathered in the meetings. To enhance Georgia’s business climate, the governor proposed several legislative changes to the state’s statutory incentives, including sales and use tax exemptions on energy used in manufacturing and for construction materials for competitive projects. Deal also proposed a modernization of Georgia’s job tax credit structure.

In April 2012, the governor signed tax reform legislation that reduces the state’s marriage penalty tax and eliminates the sales tax on energy used in manufacturing — need for the latter was derived directly from input gleaned in the Competitiveness Initiative. The governor will institute another such initiative in the future to gain more current insights into the business climate requirements of Georgia’s businesses. But there’s more to his strategy than that.

“We have to be willing to be fluid and to adjust policies to meet the needs of the times, and that’s one of the difficulties that government sometimes has — that it cannot react quickly enough or be flexible enough to adapt to changing conditions,” says Deal. “If you’re stuck in a mold in which there isn’t a willingness to address new issues or an inability to address new issues, you’ll get left behind. We have put in a very fluid but also very competent system of reviewing proposals for economic growth, and it has served us well. That’s the model that’s working for us.”

Another priority moving forward is to build on Georgia’s inherent economic development strengths, which have served the state well. Logistics is a case in point.

“You can reach 80 percent of the United States market from Georgia within a two-day truck drive or a two-hour flight out of Atlanta Hartsfield-Jackson International Airport,” says Deal. “We are strategically located and have the most extensive rail network in the Southeast with two Class 1 railroads and 25 short-line providers, a well-developed road system with five major Interstates, 20,000 miles of federal and state highways and the busiest airport in the world. So we have a lot going for us logistically, including the ports. The Port of Savannah is a huge part of our logistics and a main focus in terms of making sure it can accommodate the post-Panamax vessels when they come through the enlarged Panama Canal in mid-2015.”

Another part of Georgia’s business climate allure, says Deal, is its power supply and relative affordability. “Statistically, our electrical prices are about 7 percent lower than the national average. And we give companies a choice of energy providers,” says the governor. “We have energy competition here, whereas in many states it’s monopolistic — you’re allocated power by whoever has jurisdiction in your area. Being able to shop for energy here helps keep those prices down.”

Industries that are helping drive Georgia’s economy — and can do so thanks to its business climate — are aerospace, automotive and agribusiness. The significance of the $1-billion, 2.2-million-sq.-ft.(204,380-sq.-m.) Kia plant in West Point, which opened in February 2010, cannot be overstated, says Gov. Deal, particularly as a magnet for suppliers to that plant and others in the Southeast. “The suppliers can be a larger jobs supplier than the original plant was, which is a good thing,” he points out. “The

same is true of heavy equipment manufacturers, such as Mitsubishi and JCB here in Georgia, including the new Caterpillar plant in the Athens area. Caterpillar, which moved a plant here from Japan, has been very helpful in encouraging its suppliers to also move to Georgia. We’re beginning to see them do just that.

“It’s great to have industries with a really big presence in the state, but it’s better if you have a diversified economy that is based on many types of manufacturers,” says Deal. “That’s what we have. We are seeing a return of what has traditionally been the umbrella arena of textiles, the biggest of which was the carpet industry but is now more appropriately referred to as the flooring industry. We’re seeing announcements from Mohawk and Engineered Floors. And we’ve recently had an announcement from an Indian textile company, Shrivallabh Pittie Group, about their new manufacturing plant [$70 million; 250 jobs] near Sylvania in Screven County.

“Things are looking very bright in terms of growth in our economy and a diversified job base.”

Agriculture is still the chief economic driver in Georgia, Deal relates, “and it’s becoming more diversified. It’s not just exporting peanuts, pecans and cotton anymore.” Environmental regulations in the European Union are driving demand for pelletized commodities, such as pine trees, as biomass energy sources. At press time, Decatur, Ill.-based agribusiness giant Archer Daniels Midland was reportedly seeking a new headquarters and IT center location, and Atlanta was believed to be on the short list. Were that investment to come to pass, it would diversify the state’s ag industry significantly.

“Our economic development people have their ears to the ground in terms of companies seeking to relocate,” says the governor. “We are seeing a significant continuation of relocation that started many years ago from the Rust Belt to the Southeast. That has accelerated, and there are reasons for that. Many states in this economy have resorted to raising taxes at the state level, for example, and the result is driving businesses out of their states. We’re saying, ‘Come to Georgia.’ ”