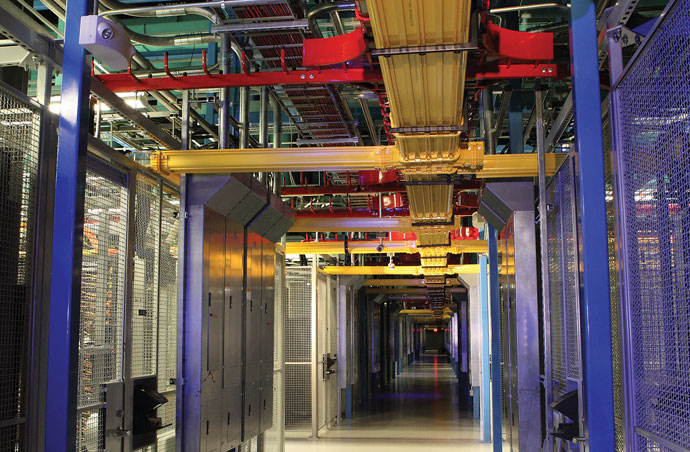 Equinix is the largest co-location data center provider in Loudoun County, Va., the premier hub for data centers in the Mid-Atlantic region of the US.
Photo courtesy of Equinix
by RON STARNER
W

hat do Equinix, Latisys and RagingWire have in common? All elected to expand their sizable data center operations in Loudoun County, Va., home to a rapidly growing cluster of co-location facilities.

How Ashburn near Washington, D.C., came to be known as the data center hotbed of the Mid-Atlantic is a microcosm of a much larger story: the emergence of data center micro-climates.

From the financial service data operations in New York and New Jersey to the huge enterprise facilities of Google, Facebook and Yahoo in the Iowa-Nebraska corridor, various regions are capitalizing on specialized growth segments of the data center sector.

The bottom line? There is no one-size-fits-all site selection strategy. The search for the Holy Grail of data centers — the perfect business location — continues, but in the process the operators of these high-tech, energy-hungry plants are writing a guidebook that others in the industry may want to follow. 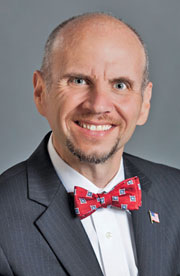 “The demand for new data center space continues to explode. Supply will not reach demand until 2015 or 2016.”

Consider the case of Equinix, the world’s largest co-location provider, which built its first data center in Ashburn in Loudoun County in 2000. It started out as a carrier-neutral, co-location company designed to create an alternative to the Metropolitan Area Exchange in Tyson’s Corner, Va.

“At the end of the summer last year, we acquired an additional 45-acre [18-hectare] site a little less than a mile away for future development of up to 1.1 million square feet [102,190 sq. m.],” says Howard B. Horowitz, senior vice president of global real estate estate for Equinix. “We will double our size.”

Like many data center operators in the area, Equinix was driven to the market by the presence of AOL in Northern Virginia. An abundance of fiber-optic connectivity was installed “because AOL built a campus here,” Horowitz says. “AOL was the driver behind the move west for a lot of the telecom companies to bring their fiber here. We had the fiber and power infrastructure in Loudoun 20 years ago.”

While the infrastructure requirements of Equinix have changed over time, the need to maintain a large presence in Ashburn has not, says Horowitz. “Our requirements today are somewhat different,” he notes. “Over time, we have increased the power density within our facilities, and technologies have changed. Cooling systems and heat rejection go hand in hand. They have become far more efficient.”

Cloud Cover Ahead for DCs

“Our business is really based on the customer demand that we see,” Horowitz says. “That customer demand is focused on a number of different ecosystems. It is different in different geographies. The cloud is a big driver of growth, and there are several specific industry drivers — content media, financial services, federal health-care mobility and other demands.” 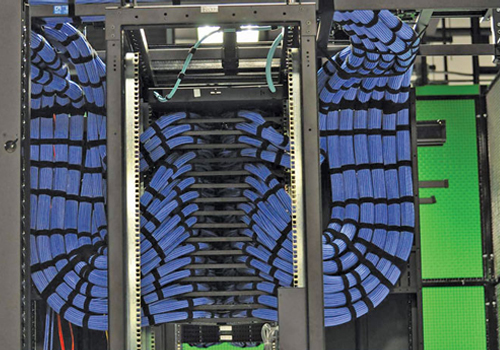 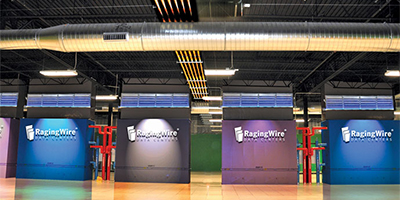 In order to remain competitive, “you have to have the right facility and you have to build a quality facility,” says Horowitz. “You have to have experience in operating it. The macro-economic drivers in this industry are very strong. We are very confident that those are long-term drivers as well.”

Loudoun County government goes out of its way to facilitate corporate facility expansions, says Horowitz. “They understand data centers. They are able to assist us in building these very specific types of buildings with specific requirements,” he says. “We are able to recapture land that had been set aside for parking and install more infrastructure. We are able to maximize the size and efficiency of our data centers. By understanding that and being cooperative, Loudoun County has helped us achieve the highest and best use of our property.”

Lining Up in the ‘Alley’

Technically, “Data Center Alley” is the area that immediately surrounds the Internet Exchange Point — MAE-East in Ashburn — located along Route 606/Loudoun County Parkway. The vast majority of data centers in the county are based in this area.

There has not been a single day in the last five years in which a data center facility has not been under construction in Loudoun. Digital Realty Trust is a classic example. Immediately after cutting the ribbon on its new 250,000-sq.-ft. (23,225-sq.-m.) data center in Loudoun, DRT broke ground on a twin facility beside it.

DuPont Fabros, meanwhile, is constructing what will be the county’s largest data center, at 42 megawatts, on the company’s Ashburn Corporate Center campus.

Loudoun specializes in build-to-suit opportunities for co-location operations. That is the county’s bread and butter, says Buddy Rizer, assistant director for economic development for Loudoun, a county of 337,000 and hub of commerce around Washington Dulles International Airport.

“The demand for new data center space continues to explode,” Rizer tells Site Selection. “The newest facility at Equinix has the capacity to store 2,000 times the information that is stored at the Library of Congress. We are talking about a sixth or a seventh of our entire capacity at Equinix. You can see how big this industry has become. 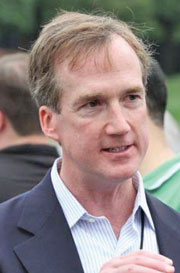 “Virginia is one of the most pro-business states in the US, and the Loudoun County Board of Supervisors and Department of Economic Development are personally involved in helping data center companies be successful.”

“Supply will not reach demand,” he adds, “until 2015 or 2016. Everything from e-commerce to social media and Web storage is driving demand.”

With more than 70 percent of the traffic on the World Wide Web traveling through Loudoun County, Rizer says it is the natural place to be for co-location companies.

The Switch SUPERNAP 7 is a 400,000-sq.-ft. data center in Las Vegas, which now competes with Phoenix and Salt Lake City for some of the largest data center projects in North America.
Photo courtesy of Switch Communications

“We like the market here. We have customers that want us to be here,” says Stevenson. “We have a business-friendly government in Loudoun County. Buddy Rizer is a data center specialist. He understands how taxation needs to be thought about relative to data centers.”

Infrastructure in Loudoun is best in class as well, says Stevenson. “Fiber and power are critical. The price of power is fairly reasonable. A significant amount of fiber connectivity is in the area. And the availability of qualified personnel is a plus. It is a highly educated and deep technical environment. It is a good place to recruit and staff your organization.”

Stevenson adds that “this site reaches a high population on the Eastern Seaboard. Huge population and business density are here. And customers want to be here to serve the federal government.” 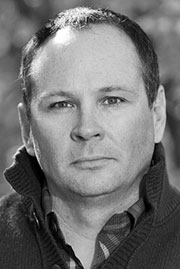 “We build mission-critical data centers exclusively in Utah. We looked at other locations in the US, but we found Utah to be the best location location to meet our needs.”

Latisys has been in rapid growth mode since its inception. “More than 75 percent of our capacity has been built since 2008,” Stevenson says. “We have two data centers currently operating in each of our four U.S. markets, and we have the capacity to quadruple the size of the company. With a 2N power structure, we are at 150 watts per square foot, expandable to 300 watts per square foot.”

Latisys will consider establishing new data center sites in the Northeast, Midwest, Southwest and Canada, says Stevenson, noting that he especially likes the incentives programs that have been implemented to help data center projects in Virginia, North Carolina, Iowa and Nebraska.

With data centers becoming more sophisticated and more power-hungry, Stevenson says the era of companies maintaining their own in-house data centers is coming to a close.

“We are seeing more first-time outsourcers,” he says. “A company that has been running its own data center and its own network and firewalls — we are seeing that type of user outsource all of its data center needs now. What inning are we in in the outsourcing trend? We are in the second or third inning. Outsourcing, as a percentage of total users, is now in the 20 to 30 percent range.”

From California to Virginia

Also taking advantage of the outsourcing trend is RagingWire, which announced Sept. 18 that it had secured $230 million to fund expansion of its data centers in Sacramento, Calif., and Ashburn.

“We get asked all the time why RagingWire came to Virginia,” says Jim Leach, vice president of marketing for the California-based company. “First, the power is reliable, available and cost-competitive, thanks to our friends at Dominion Virginia Power. Second, the fiber and telecommunications are among the best in the world. Third, Virginia is one of the most pro-business states in the U.S., and the Loudoun County Board of Supervisors and Department of Economic Development are personally involved in helping data center companies be successful.”

Leach refers to Loudoun County as “the Napa Valley of data centers. There are 30 data center providers in Northern Virginia with a broad range of products and prices. Potential customers land at the Dulles Airport, tour five or six facilities, and make the right decision for their business. It’s a good place for suppliers and buyers of data centers.”

Leach says there are a handful of robust data center clusters in the country.

While massive electrical problems have delayed the opening of NSA’s Utah Data Center, no such problems exist for C7 Data Centers. Based in Lindon, Utah, near Salt Lake City, C7 is a rapidly growing co-location provider that recently opened a new 95,000-sq.-ft. (8,826-sq.-m.) data center and office complex in Bluffdale.

With data centers in Lindon, Bluffdale and Salt Lake City, C7 is the largest co-location provider in Utah with more than 600 national and international customers, 80 percent of which are out of state.

“We build mission-critical data centers exclusively in Utah,” says Wes Swenson, CEO of C7. “We build, own and operate multi-tenant, co-location facilities here, and we are always looking to expand.

“We looked at other locations in the US,” he says, “but we found Utah to be the best location to meet our needs. This is a very safe state. Utah provides excellent power grid access, very low cost of power per kilowatt hour, flexible utility contracts, and excellent connectivity, including a mix of tier one through tier three providers.”