Fabric for the Future

Turkey blends strength and stability with diversity and youthful energy
to show an entire region how to be a global leader.

n a speech to the American-Turkish Business Council this fall, Turkish President Abdullah Gül dropped a few facts on his audience: 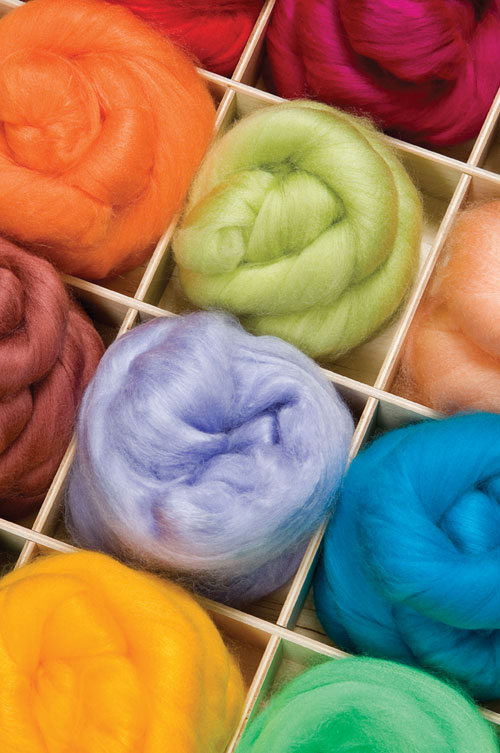 Those jobs are coming from such companies as 3M, which last year invested $500 million and aims to create 1,000 jobs in Tekirdag. They’re coming from Hyundai (which has just invested $714 million in an expansion of its plant in Izmit), as well as fellow 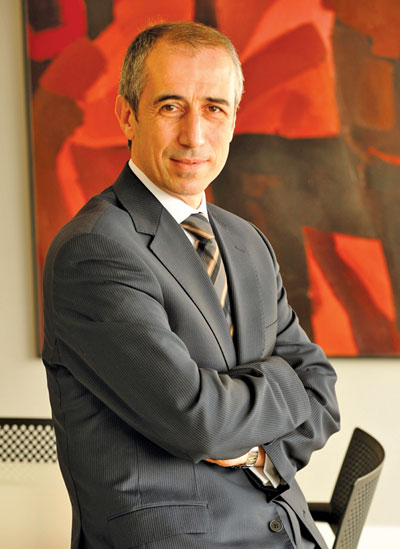 Cengiz Tas, general manager, Aksa Acrylic, sees nothing but a bright future for the carbon fiber industry in Turkey. global OEMs Toyota ($199 million and 400 jobs in Sakarya) and Ford Otosan ($370 million in Yenikoy). They’re coming from Russian pharmaceutical giant R-Pharm, which plans to invest more than $135 million in a manufacturing complex at a yet-to-be-determined location in the country. And they’re coming from Dow Chemical and its joint venture partner Aksa Akrilik Kimya Sanayii A.S., part of the Akkök Group, a Turkish conglomerate.

Last year those two firms formed a new joint venture, DowAksa Advanced Composites Holdings BV, to manufacture and commercialize carbon fiber and derivatives. The JV will have a particular focus on bringing solutions to market that reduce overall costs, especially in the fields of wind energy, transportation equipment and infrastructure. The carbon fiber composites industry is valued at US$10 billion globally and is expected to reach $40 billion by 2022.

Ahmet Dördüncü, CEO of the Akkök Group, noted at the Group’s annual meeting that it would continue to to focus investments on industries that would help position Turkey among the 10 top economies of the world by 2023: “We plan to invest $565 million in the year 2013 to sustain our ongoing growth,” he said. “Another of our goals is to increase our revenue to $5 billion in 2017, compared to $3.1 billion for this year.”

Turkey’s geostrategic location allows investors to access lucrative markets around Turkey with a combined population of 1.5 billion, a GDP of more than $25 trillion and more than $8 trillion in trade.

Key to the Group’s progress, said Dördüncü, was Aksa’s R&D center, which helped the company develop 50 performance chemicals in 2012.

“We will invest $1 billion in this area in the coming five years as part of our bid to become one of the world’s leading carbon fiber companies by 2023,” said Dördüncü. 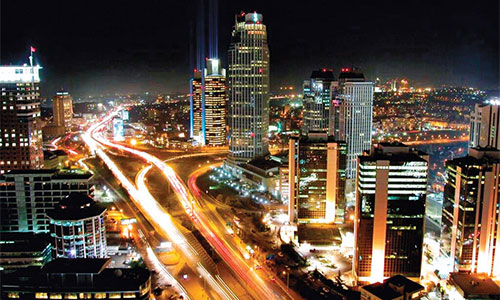 • The Third Bosphorus Bridge, the world’s ninth longest suspension bridge, will be constructed at the northern end of the Bosphorus. Now named the Yavuz Sultan Selim Bridge, with eight lanes and two railroad lines, it is part of the projected 260-km. (162-mile) Northern Marmara Motorway, and will be opened in mid-2015. Once the $3-billion bridge has been completed, all trucks and heavy-duty vehicles will be directed to it.
• The new Istanbul Airport, the city’s third international airport, will be the world’s largest airport, with an annual passenger capacity of 150 million. The $10-billion project will be constructed in the north of Istanbul’s European side beginning in May 2014.
• Turkey constructed nearly 15,000 km. (9,322 miles) of divided road in 2002-2011, bringing the total divided-road network to 21,000 km. (13,052 miles) today, well on the way to the 2023 goal of 36,500 km. (22,685 miles). Twelve build-operate-transfer highway projects with a total cost of $47 billion are to be completed by 2023, part of a total $84 billion worth of highway projects to be completed by 2035.
• “Turkey’s urban infrastructure is in dire need of redevelopment,” says ISPAT President Ilker Aycı, in order to both upgrade housing stock and to implement earthquake-proof measures. “According to studies, $400 billion worth of investment is needed for the urban renewal projects in Turkey,” he says. “Around 7 million out of Turkey’s total 20 million residential buildings will be replaced with new buildings.”

How to Be a Leader

In an interview, Cengiz Tas, general manager, Aksa Acrylic, says the Dow partnership gives Aksa “an important competitive advantage on a global scale.” But lest one think the expertise only comes from outside the company or the country, he notes, “We started producing in 1971 at our plant in Yalova, to supply Turkey’s demand for acrylic fiber. Our ongoing investments and innovations since then have enabled us to turn Turkey into the second largest acrylic fiber market, following China. Aksa’s output equals to 15 percent of the global acrylic fiber production and meets 67 percent of Turkey’s acrylic fiber demand for 2012.

“Turkey’s textile and ready-to-wear industry is a vital wealth source for the country and its population,” says Tas. “It is a major employment source and the leading export industry of Turkey.”

Indeed, says Ilker Aycı, president of the Prime Ministry Investment Support and Promotion Agency of Turkey (ISPAT), textiles, along with automotive, continues to be a leader for the Republic’s economy. He recounts the challenging site selection process of Grasim Industries Limited, a subsidiary of the Indian Aditya Birla Group (ABG).

“ABG is the world’s largest producer of viscose staple fiber (VSF), while Turkey has been dependent on imports of VSF for its textiles industry,” he says. Turkey was a leading contender among several countries for a new VSF plant.

That’s no surprise: According to a May 2013 report on Turkey’s investment climate from Ernst & Young, when Turkey first started welcoming foreign investors in 1980, the sum total of that investment came to $33 million. Today, the cumulative value of those foreign investments has reached more than $138 billion. Moreover, a new investment incentive scheme came into effect in summer 2012 that will help Turkey achieve its economic goals for 2023 — the centennial anniversary of the Turkish Republic. Among those goals:

No one could see the events related to the Gezi Park protests and subsequent unrest in Turkey in early 2013, and other events in the overall region, and not wonder how it might affect the business climate for investment and everyday operations. So we asked ISPAT President Ilker Aycı how he is responding to corporate concerns about unrest in the region.

ISPAT President Ilker Aycı “Turkey has all the necessary economic, political and military means to live peacefully and provide stability in such a region ridden with conflicts,” says Aycı. “Turkey successfully endured the war in Iraq and will successfully endure any other conflicts in the region without risking economic stability.” President Abdullah Gül elaborated in an interview later in September with Foreign Affairs: “Turkey wants stability for the region, it wants to have economic cooperation, and it wants to see its people happy and satisfied,” he said. “For people to be more happy and satisfied means that there should be more democracy, more human rights, and people should be able to exercise those rights. These are the pillars of our foreign policy.”

Goals are a lofty ideal. But they’re attained on the ground, through the daily and detailed project work of people at organizations such as ISPAT. 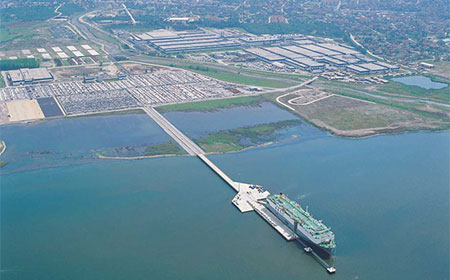 Ford Otosan has invested around $1 billion in Kocaeli since 2011. Companies such as Bridgestone, Goodyear and Pirelli have also set up production facilities in the province.

“The main requirements of the investment project,” says Minister Aycı about the ABG site selection, “involved 1 million square meters of land, easy access to 60,000 cubic meters per day of water, and proximity to the yarn producers that would be Aditya Birla’s customers. Eight different provinces of Turkey were analyzed for these basic requirements. After the first elimination, more than 10 alternative sites were visited in six different provinces. These site evaluations were not limited to industrial parcels. During the process, ISPAT’s site selection team and representatives of the company visited dams and rivers that supply water to the industrial site, pipeline routes were investigated for alternative scenarios in case there was no available land in the Organized Industrial Zones. Logistic advantages of the zone were looked into, while ports and train stations were visited as well.”

The most suitable land, he says, was found in the Adana Organized Industrial Zone. ABG’s subsequent $500-million investment in Turkey will create employment opportunities for some 500 people.

“Of course this is not the end of the story,” says Aycı. “With the support of the Adana Organized Industrial Zone’s management, parcels were merged in order to create 100 hectares of single plot, roads were shifted, and other related infrastructure work was completed in a short time.”

According to a May 2013 report from Ernst & Young, FDI in Turkey has shown a healthy diversity over the past five years. Survey results in the report show that sectors driving growth over the next two years will be led by real estate, hospitality and construction; energy and heavy industry; transportation and automotive; and retail and consumer products.

Aycı says another major site selection study was done for the JV of Sumitomo Rubber Industries (Sumitomo Rubber) and Abdulkadir Ozcan Automotive Tire (AKO), which held a groundbreaking in September 2013 with an initial investment of $30 million. This time the solution was found on land owned by the Turkish Treasury in the Central Anatolian province of Cankiri. “An organized industrial zone was established on this land under the coordination of ISPAT and with full cooperation of different governmental institutions,” says Aycı. “ISPAT’s site selection team led all the investment process, including the establishment of the organized industrial zone, electricity connection, natural gas pipeline project, water supply, road construction, and other matters.

In other words, says Aycı, “ISPAT’s support for site selection services is not limited to desk-bound research, but includes holding site visits, accompanying investors, following up infrastructure work, coordinating land development, and collecting all related data and information with regard to feasibility.” 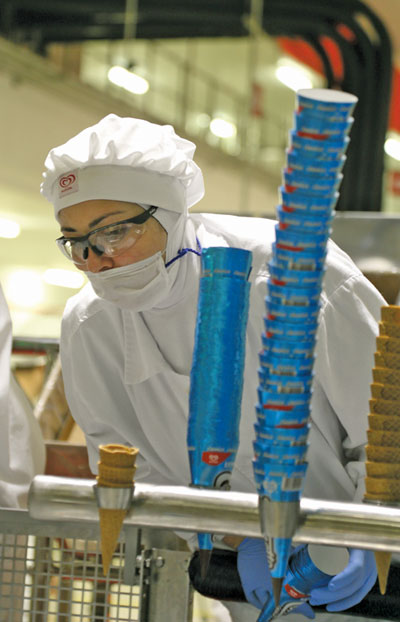 Unilever in August celebrated the opening of a new $151-million ice cream factory in Konya that will employ 300. “We decided that Konya was the most suitable place for our investment for a number of reasons, such as access to raw materials, good infrastructure and logistics, the availability of qualified workers and lower earthquake risks, as well as the good support of Konya’s local administration,” said Pier Luigi Sigismondi, Unilever chief supply chain officer.
Photo courtesy of Unilever

Variety Is the Spice of Life

Aycı notes that investment has grown more diverse by sector and by origin. The effort has attenuated the ill effects of the recent global financial crisis and ensuing debt crisis, particularly in Turkey’s leading export markets in the EU.

“We have been working hard to diversify the sources of FDI inflows to Turkey,” says Aycı. “Our efforts have yielded results and Turkey has attracted new investments from new sources, such as India, Japan, Russia, Malaysia and the Gulf countries, as well as the US. In the coming years, we will see more investment from new sources.”

Aycı notes the emergence of the financial services, energy, ICT, retail, healthcare, and mining sectors. And Turkey ranked as the third most attractive real estate investment destination among emerging countries in 2012, according to a survey conducted by the Association of Foreign Investors in Real Estate.

“Moreover,” Aycı notes, “the Turkish government amended the relevant legislation to allow foreign nationals to buy real estate in Turkey without the reciprocity principle. That makes the sector even more attractive.”

Aycı also points to the pattern of structural reforms the Republic has implemented since 2003, when the corporate tax rate was reduced to 20 percent from 33 percent and equal treatment was guaranteed to all investors.

“Strategic investments,” he says, “will be strongly supported in all regions with the same incentives.”