A bakery closed by bankruptcy receives a major investment
thanks to a community-wide effort to retain important jobs. 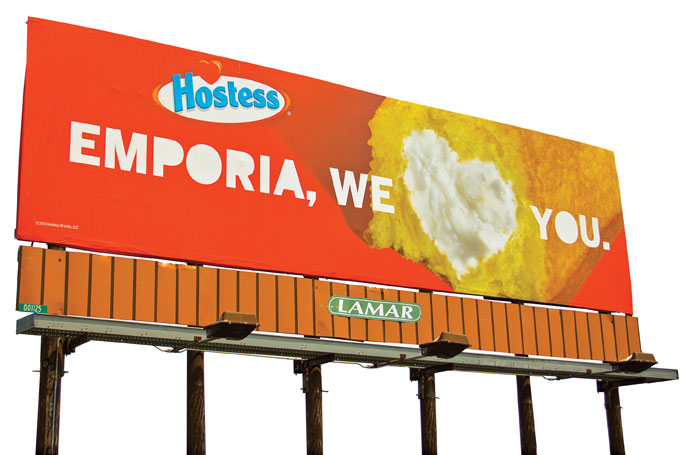 A Hostess billboard along I-35 in Emporia, Kan., lets the world know how the new Hostess feels about re-opening a nearly 50-year-old bakery in town.
Photos courtesy of the Regional Development Association of East Central Kansas and Hostess Brands LLC
by ADAM BRUNS
I

n late 2012 when Hostess declared bankruptcy, a long line of Twinkie and Ding Dong jokes predictably exploded across the airwaves. The quips — just as predictably — quickly went stale, due to the much longer line of suddenly unemployed workers across the nation.

Thanks to a combination of a crippling bakers’ union strike (following labor concessions three years before) and what others characterized as a poorly designed logistics system and inexperienced management, a work force of 18,000 people at 864 Hostess locations in 48 states was out of work.

An investigation by the US Dept. of Labor found that increased imports of baked products contributed importantly to the company’s sales declines and worker separations, and thus certified those workers as eligible for Trade Adjustment Assistance.

Perhaps nowhere was the effect felt more strongly than in Emporia, Kan., located along I-35 southwest of Kansas City and south of Topeka. The Hostess snack cake bakery had been in operation for nearly 50 years, and some 540 people (2 percent of the town’s population of 25,000) lost their jobs.

But this summer the line was back up and running after Hostess Brands LLC, a new company and employer under new ownership (and sans unions), in April announced plans to reopen and expand the Emporia bakery. The company will initially create 250 jobs in Emporia and plans to create a total of more than 300 jobs in the community within the next several years. That’s a significant chunk of the 1,800 workers Hostess Brands plans to bring back to work nationwide. The company expects to invest up to $60 million in significant facility upgrades.

The investment in the Emporia baking facility is being funded by affiliates of Apollo Global Management, LLC, and Metropoulos and Co., which purchased selected Hostess assets out of bankruptcy in April 2013. Other assets around the nation have been purchased by Flowers Foods (including a bread facility in Lenexa, Kan.), Grupo Bimbo and Hackman Capital. Apollo and Metropoulos agreed to pay $410 million to purchase the brands, five bakeries and certain equipment.

According to published reports, approximately 80 former Hostess employees had accepted assistance from KansasWorks in order to go back to school or enter retraining programs. While some have been rehired, many of the factory floor jobs are being filled by The Arnold Group, a temporary staffing and HR firm based in Wichita.

The re-opening prompted continuing critical statements from the Bakery, Confectionery, Tobacco Workers and Grain Millers International Union (BCTGM), which had 6,600 members employed by the former Hostess.

“Rather than hire professional, experienced bakers who have produced quality snack cakes in the company’s bakeries for decades, Hostess management has chosen instead to hire primarily workers with little or no experience in the demanding wholesale snack cake baking industry,” said BCTGM President David B. Durkee. “Last year’s demise of Hostess was due in large measure to critical mistakes made by a series of management teams that simply did not have any meaningful experience in the wholesale bread and cake 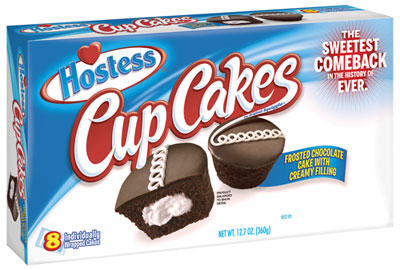 baking business. To avoid the same fate, the BCTGM encourages the two private equity firms that own Hostess Brands, LLC to change their approach and work with our union and our members in a cooperative manner. This is their best hope for long-term success.”

Those with jobs in Emporia today might disagree. And some folks around town might choose a different way to define “cooperative manner.”

“Making the best snack cakes in the world is something that Emporia-area workers know how to do well and are eager to resume doing,” said then-Mayor and current City Commissioner Bobbi Mlynar, who helped lead the cooperative effort to keep the local plant open, in April, when hundreds of people attended a ribbon-cutting ceremony keynoted by Kansas Gov. Sam Brownback.

“The Emporia community is excited to officially welcome back Hostess Brands,” said Jon Geitz, chair of the Regional Development Association of East Central Kansas and vice-mayor of the city of Emporia. “The RDA in collaboration with community leaders worked diligently over the past 15 months to ensure a positive outcome after the bankruptcy was announced. Once again, Emporia has earned its reputation as a community that speaks with one voice.”

“I am delighted with the progress we have made upgrading the Emporia facility since we acquired Hostess,” said Dean Metropoulos, chairman and CEO of Hostess, “We have expanded the bakery’s capacity significantly, which will result in meaningful job growth in the Emporia community and ultimately help us achieve our goal of bringing Hostess products back to the shelves for our customers as quickly as possible. The State of Kansas and City of Emporia have been extremely helpful throughout the redevelopment process, and we want to thank them for their assistance with this project in particular and for their long-standing support of Hostess.”

“The bakery in Emporia was centrally located and provided a good facility with a strong work force and room to expand,” he says. “We were also greeted with outstanding support on the state and regional levels. The Regional Development Association of East Central Kansas (RDA) and its director, Kent Heerman, was the first organization to reach out to us proactively when it was announced that Metropoulos & Company and Apollo Global Management were the likely purchasers of the Hostess snack business assets. After a meeting in Kansas City with the [Kansas] Department of Commerce and local officials from Emporia, we quickly received an attractive package of proposals from both the state and local levels. Based in part on those incentives, within a month of that meeting, we agreed that Emporia would be a flagship bakery for Hostess.”

Has the new Hostess altered cost-of-doing-business strategies or arrangements in order to shore up the operation against some of the factors that forced its closing in the first place?

“Hostess Brands now operates with a much more efficient distribution system,” says Cramer. “Products are transported by a third-party vendor from the bakeries to retailers’ warehouses, rather than having route drivers transport products to individual stores. This has dramatically expanded our ability to serve many more customers than before, particularly convenience stores.

“Hostess has also made significant upgrades to the bakeries,” he says. “By the end of the year we will have invested $100 million in new equipment and facility improvements. Additional funds are earmarked for next year. We have also invested in new training programs for our employees.

These upgrades have increased our capacity significantly, which has been critical, given the widespread demand for Hostess products since they returned to shelves in July.”

In other words, the Twinkies and Ding Dongs are flying off the production line and off the shelves. That’s no joke. But it is the sort of thing that has everyone smiling. 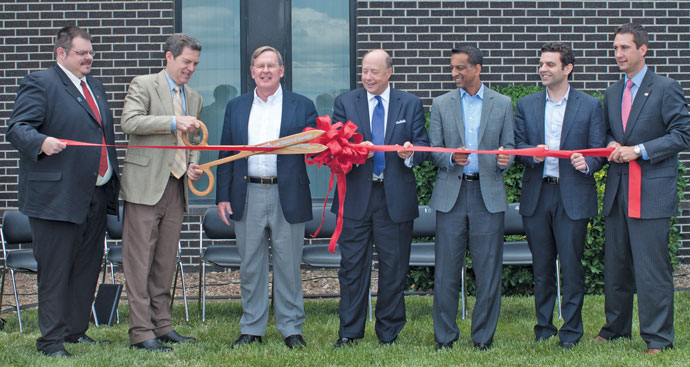