How Travelers selected Greater Omaha, and what that means for Nebraska.

Pictured above: Greater Omaha has become a hotbed of data center activity in recent years, as Yahoo, Fidelity, Google and Travelers have all invested heavily into large facility projects in the metro area.
Photo courtesy of Greater Omaha Chamber
by RON STARNER
T

ravelers Insurance scoured the country and chose Sarpy County, Neb., for the giant insurer’s second major data center in the US.

If Nebraska Gov. Dave Heineman has his way, plenty of other companies will follow in Travelers’ wake.

“We continue to focus every year on being more competitive,” Heineman tells Site Selection. “Winning the Travelers project is very exciting news for Nebraska. We competed with 300 sites and we eventually received the nod. That is very gratifying. We know we can’t win every project, but we know we can compete very successfully with a high batting average.”

The win in this case is a 190,000-sq.-ft. (17,651-sq.-m.) data center that represents a $200-million capital investment by Travelers, the only property insurer listed on the Dow Jones Industrial Average. Locating near Springfield in the Greater Omaha area, the facility will employ at least 30 full-time workers when it opens in the first quarter of 2015.

The investment known as Project Oasis takes advantage of Nebraska’s new Tier 2 Large Data Center incentives program, enacted by Heineman in 2012. Under this law, companies that invest at least $200 million and create at least 30 new full-time jobs are eligible for a refund of all sales and use taxes on the project’s tangible personal property from the date of acquisition through the entitlement period, a sliding-scale wage credit, and a 10-percent investment credit. The incentive also carries a personal property tax exemption up to 10 years on all of the project’s personal property.

“Since we implemented the Nebraska Advantage economic incentives program eight years ago, more than 400 firms have expanded in our state, invested more than $10 billion and created more than 26,000 jobs,” says Heineman. “Since passing the new data centers incentives legislation, we have secured big wins from Yahoo, Fidelity and now Travelers.”

An official with Travelers told Site Selection that this was an extremely competitive site search. The company sought a location that would place the firm in close proximity to significant support infrastructure, offer competitive electric utility costs, and provide a real estate market able to accommodate future expansion needs.

“Travelers evaluated over 300 metropolitan areas for their alignment with specific selection criteria to house a new data center,” says Delker Herbert Vardilos, communications manager for Travelers in Hartford, Conn. “Omaha, Neb., and Des Moines, Iowa, were the two final candidates. The new site meets specific Travelers’ requirements which include lower building and operating costs and economic incentives. State and local officials were very helpful and supportive during the process.”

Flexing the Muscle of Power

Vardilos says the project was driven by “changing business and technology requirements needed to serve our customers, agents and employees. The current data center in St. Paul, Minn., has outgrown its space, and a new site has been selected to meet the changing business needs of Travelers’ constituents.”

Madelyn Lankton, executive vice president and chief information officer for Travelers, added that “Travelers appreciates Nebraska’s warm welcome and support as we prepare to build our new data center in the Greater Omaha region. We are committed to ensuring the stability and integrity of our business operations and are pleased to form a partnership with a community that embodies those same values.” 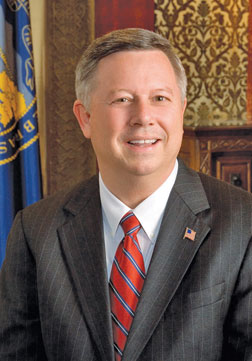 “We know we can’t win every project, but we know we can compete very successfully with a high batting average.”

“We knew we needed to move quickly with power infrastructure,” says Tim O’Brien, economic development manager for OPPD. “Our flexibility helped us. The county and state’s commitment to funding infrastructure really sealed the deal.”

Located just a couple of miles from existing data center sites for Yahoo and Fidelity, the Travelers site is one that OPPD had been actively marketing for some time, notes O’Brien. “We became aware that CBRE was doing an extensive site search on behalf of a large data center client in late 2012, so this was a very competitive project over a 9-to-10-month period,” he says. “Dallas and Indiana were considered by Travelers, but our niche in financial services really helped us land this deal.”

Travelers, the second-largest commercial insurer in the U.S., will locate its data center on a 140-acre (57-hectare) parcel on the southwestern corner of 144th Street and Schram Road. The Sarpy County Economic Development Corp. had an option on the land and brokered the deal.

The governor says that project wins like this are confirmation that Nebraska’s business climate is trending in the right direction. “We have a very business-friendly state, but we need to do additional work to improve our tax competitiveness,” Heineman says. “In the upcoming legislative session, I will be focused on providing additional tax relief.”

Heineman says he plans to seek lower tax rates for “our top individual tax rates and our corporate tax rates. We want to help our citizens keep more of their money in their pockets. When we lower rates for individuals, this lowers rates for small businesses.”

The governor’s efforts to provide tax and regulatory relief to businesses in Nebraska have captured the attention of those who evaluate state business climates. According to Forbes magazine, Nebraska now has the sixth best overall business climate in the nation, while CNBC reports that Nebraska has the fourth best quality of life among all U.S. states.

“We just want to continue to improve those rankings,” says Heineman. “We want to continue to make progress. A good example is our fiscal policy. With $680 million now in cash reserves, our state continues to make very strong improvements in its overall fiscal condition. We also have one of the lowest jobless rates in the US.”

A byproduct of these reforms is a wave of investment in multiple industry sectors across the state. Over the past 12 months, Nebraska has seen sizable announcements from a variety of companies: