‘No Taxes
Means No Taxes’

The corporate real estate veteran picked to lead a groundbreaking state program says START-UP NY will do exactly that for the state’s economy. 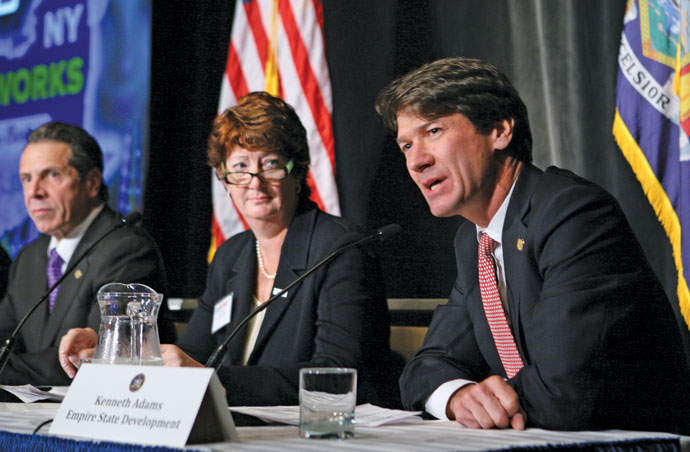 It appears there isn’t one.

“No taxes means no taxes — no fine print, no tricks and traps or caveats,” said Leslie Whatley on October 22, the day New York Gov. Andrew Cuomo formally launched START-UP NY (www.startup-ny.com). The program will invite businesses to locate on specially designated properties on or near State University of New York and private university campuses and avoid all income, business, corporate, state or local taxes, including all sales taxes, property taxes and franchise fees, for an entire decade.

“I’ve been in corporate real estate for 30 years,” said Whatley, “and I’ve never seen a program this aggressive.”

Whatley, whose career includes posts as global head of corporate real estate at both Morgan Stanley and JPMorgan Chase, as well as a leader on General Motors’ real estate team, was impressed enough with the concept to sign on as START-UP NY’s executive vice president. Also helping guide the effort will be newly named special advisor John Mack, a senior advisor at Morgan Stanley who served the firm in many leadership capacities until his retirement in late 2011. Mack called the program “a truly innovative approach to growing the state’s economy.”

“Governor Cuomo’s transformative new approach to drawing businesses and jobs to New York, particularly to Upstate, capitalizes on SUNY’s academic strengths and unique position as an economic engine across the state,” said SUNY Chancellor Nancy L. Zimpher. (For more on this alignment, see the July 2012 issue of Site Selection.)

“Upstate New York has seen too many years of decline, and our communities have lost too many of their young people,” said Cuomo earlier this year when enabling legislation for the program was confirmed. “We desperately need to jumpstart the Upstate economy and these new tax-free communities will give New York an edge like we’ve never had before when it comes to attracting businesses, start-ups, and new investment.”

It’s no accident that the SUNY system’s acronym could easily be interpreted as standing for the new program, which will use SUNY’s network as well as other college communities as its backbone. Nearly every single New York resident is within 30 miles (48 km.) of a SUNY campus, and 93 percent are within half that radius. The program replicates successes at select SUNY campuses such as UAlbany and CNSE, SUNYIT in Utica/Rome, and the University at Buffalo, where a focus on life sciences is leading the way.

SUNYIT had its own big announcement earlier in October, when Advanced Nanotechnology Solutions Incorporated (ANSI), SEMATECH, Atotech, and SEMATECH and CNSE partner companies, including IBM, Lam Research and Tokyo Electron, committed to invest $1.5 billion to create ‘Nano Utica,’ the state’s second major hub of nanotechnology research and development. The public-private partnership, to be spearheaded by the SUNY College of Nanoscale Science and Engineering (SUNY CNSE) and SUNYIT, will create more than 1,000 new high-tech jobs on the campus of SUNYIT in Marcy. 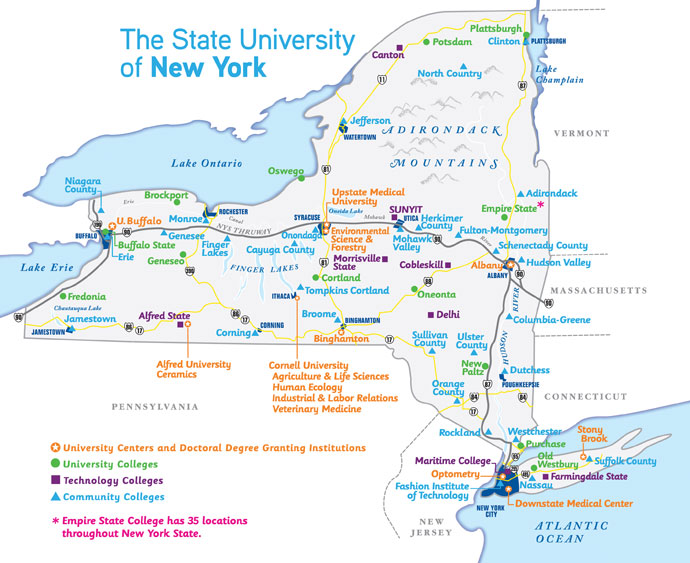 The SUNY network prides itself on what SUNY Chancellor Nancy Zimpher calls “systemness.” Just as impressive to corporate prospects are its diverse centers of expertise, from nanotech to advanced materials to agriculture.
Image courtesy of SUNY

An important provision of the STARTUP-NY program is that “businesses that might compete unfairly with other local businesses outside the tax-free area would be ineligible to participate.” Here are some of the program’s other parameters, as it begins to ramp up for a January 1, 2014, start:

Start-ups from New York State incubators will be eligible to enter tax-free communities and be eligible for the benefits under the program. In New York City, Long Island and Westchester County, businesses must be start-ups or high-tech companies. Statewide, certain types of businesses are excluded from the program, including retail and wholesale businesses; restaurants and hospitality; professional practices like law firms and medical practices; and energy production and distribution companies.

Every SUNY community college and four-year college/university can establish a tax-free community using vacant land or vacant building space on campus (for those outside New York City); any business incubator with a bona fide affiliation to the campus, university or college; and up to 200,000 sq. ft. (18,580 sq. m.) within one mile of a campus (for every campus north or west of Westchester County), or further with approval from Empire State Development (ESD). The City University of New York (CUNY) will be able to establish a tax-free community on a campus in each borough — Manhattan, the Bronx, Queens, Brooklyn and Staten Island — in an area of economic distress.

“As the corporate real estate person, I’d be looking at the numbers.”

The program also provides 3 million sq. ft. (278,700 sq. m.) of tax-free areas primarily dedicated to private colleges and universities on land north of Westchester County, to be allocated by the three-member START-UP NY program board in a manner that ensures regional balance and balance among eligible rural, urban and suburban areas in the state. Of these 3 million sq. ft., 75,000 sq. ft. (6,967 sq. m.) will be allocated for each of the following: Nassau County, Suffolk County, Westchester County, Brooklyn, the Bronx, Manhattan, Queens and Staten Island. Once the square-footage cap is reached in these counties and boroughs, the board may designate up to an additional 75,000 sq. ft. in each.

Businesses will have to submit certification to ESD, and falsifying certifications will be a felony. The legislation includes strict provisions to guard against abuses such as shifting jobs among related entities or “shirtchanging,” when a company reincorporates under a new name and claims its existing employees are now new jobs. In cases of fraud, the state will be empowered to claw back benefits granted to the business. 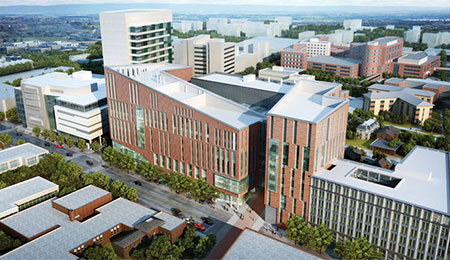 Companies that do not meet the terms of the program — including meeting their job creation targets — may have their benefits reduced, suspended or terminated, says the state. ESD will have the authority to review company data to ensure that jobs have been created and maintained, and to end participation by companies that have not created net new jobs. ESD will be required to publish a comprehensive annual report to enable the public to evaluate the program’s impact.

At a press conference Oct. 22 with Leslie Whatley, Kenneth Adams, president and CEO of Empire State Development, appeared alongside Leslie Whatley to give further dimension to what they see as a watershed moment for the state. But first Adams pointed out it was in keeping with other programs that have been rolled out during the Cuomo administration, including measures to limit state budget growth and lower income taxes, two rounds of regional economic development council grants, the Excelsior Jobs Tax Credit program and a nearly fully subscribed revolving loan fund. He said the state’s private-sector work force employment level now stands at 7.5 million people, an all-time high.

“Today’s announcement raises the bar even higher,” he said. “It’s a groundbreaking new venture that transforms the way we conduct business here in New York.”

Whatley said it was a vision of Gov. Cuomo’s that came about because “he got tired of hearing that businesses were leaving New York because they were taxed too much and the state was not competitive. In creating tax-free zones with our academic institutions, we’ll reduce the firms’ structural costs.” But the benefits go well beyond that, beginning with a university system she called “a gem.” The ultimate goal, she said, was to develop 120 million sq. ft. (11.1 million sq. m.) of tax-free space, or “more than the commercial space in Philadelphia and San Francisco combined.” 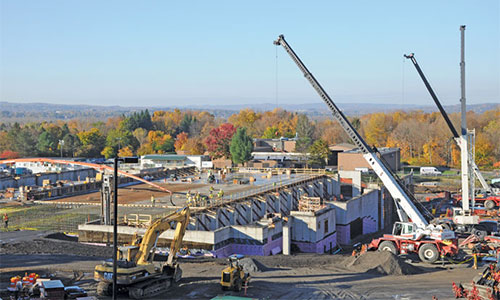 Whatley’s team is now working with the university system to develop an inventory of land, space and buildings. There will be additional flexibility if a school grows its own footprint over time, as that space can be included in the program automatically. That option could come in handy vis-à-vis the eventual list of 20 “strategic” state properties that will be chosen for the program, said Adams.

“Empire State Development has been in the process of selling and developing state facilities for a couple of years,” he explained, “and we have an inventory of closed minimum-security correctional facilities all over the state, as well as former state psychiatric hospitals and armories from the Division of Military and Naval Affairs.” He said additional assets likely will be added to the portfolio, “which the state will make available to the universities. If a university wants to annex a state prison or armory into its campus … that can be done.”

Challenged to respond to concerns that someone else will have to pay for the free ride on taxes, Adams said a 10-year tax abatement would be in place, but the local sales taxes, property taxes on homes and other economic activity from the new employees of benefiting companies would more than make up for it.

“A number of areas, particularly in Upstate New York, have been hit hard by the departure of industry,” added Whatley. “We’re trying to direct some of this activity back into places like Buffalo and Rochester, and restore some of that income.”

Adams called the new program “a Texas-like experience, but better than Texas or Florida, because we take out business taxes, not just personal income tax.”

Asked to put back on her corporate hat for some perspective, Whatley said it’s not just about the flight of jobs from New York to Florida, but from the US to other parts of the world. She reiterated the lack of “tricks and traps,” noting a recent deal she’d worked on that she said included some of those when she dealt with the Big Apple. “We’re trying hard for that not to happen here,” she said.

Whatley also cited a recent project example that got at the qualitative side of things, as a company needed a high number of people who could develop applications for financial derivatives.

“Two places on the planet had an existing stock,” she explained. “Budapest and a small town in China. Imagine you’re a company that doesn’t want to look to those far regions. You go in concert with a university with a strong math program, or you sponsor a program that feeds into your work force. That’s really powerful.”