Gov. Jay Inslee punches up an agenda for growth. 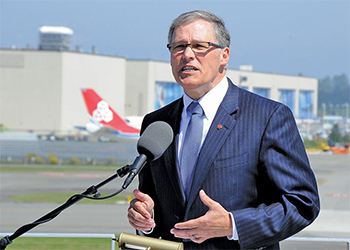 On May 9, 2013, Washington Gov. Jay Inslee chose the Future of Flight center at Everett’s Paine Field, adjacent to Boeing’s Everett manufacturing complex, to announce his Aerospace Industry Strategy.
Photo courtesy of Office of the Governor
W

ashington Gov. Jay Inslee says the state his family has called home for five generations has a “unique marriage of assets.” Some of them just need a second honeymoon.

In May Inslee launched an all-out campaign to land the assembly and manufacturing work for the forthcoming Boeing 777X, including its carbon-fiber wing.

“All my friends were Boeing families growing up,” says the Seattle native. “I got to sit in the first Boeing 707 at age 10.”

“The Legislature has the opportunity to make a significant down payment in many of these areas in the upcoming special session,” Inslee said in May. “Transportation is a significant driver of costs. By funding additional highway, bridge and transit projects, we will improve the movement of employees and parts to and from Boeing’s manufacturing sites and the supply chain all over the state. Additionally, I have proposed significant investments in STEM education and aerospace workforce training that are already on the table for the Legislature’s consideration. We must make these investments now.”

Alas, while Inslee’s education goals are moving, his hopes for transportation got stuck in political traffic.

“Because we are a growth state, it brings the problem of congestion,” says the optimistic Inslee, citing projections of 1 million people coming to Washington over the next decade and a half. “We had a good package pass our House, but it did not pass the Senate yet. We’re working on that, and our Republican colleagues in the Senate are now willing to talk. There is some possibility we could tee up a package by Thanksgiving, or at least by January. There is some resistance to moving the ball, but we’re getting over that.”

Amazon’s 1.8-million-sq.-ft. (167,220-sq.-m.) campus in South Lake Union (pictured), developed by Vulcan Real Estate, was a finalist this year for the Urban Land Institute’s Global Awards for Excellence. The company is pursuing its own construction of another development in the city’s Denny Triangle area, and continues to fill space at other locations in the 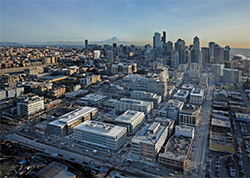 Image courtesy of Vulcan city. Altogether, once current projects are moved into by 2018, the company will have occupied more than 7 million sq. ft. (650,300 sq. m.) of space in Seattle since 2007 via 20 separate projects.

In September, the state Community Economic Revitalization Board (CERB) announced approval of a $2-million loan for Snohomish County Airport to invest in Paine Field infrastructure. The County will use the funds, along with more than $2 million in local match, to prepare 42 acres of the Paine Field Aerospace Business Park near Boeing’s Everett manufacturing campus for construction of an aerospace manufacturing facility that could be used by Boeing or another supplier to support the anticipated 777X program.

“We’re providing The Boeing Company with options,” said Snohomish County Executive John Lovick in July. “We believe there are a number of potential sites on which a building of the size necessary to build these very long carbon fiber wings is feasible, both inside their current property line or at Paine Field. We’re planning to provide certainty for the company whichever direction they choose to proceed.”

In April the Council of Chief State School Officers announced that Jeff Charbonneau (pictured), a chemistry, physics and engineering teacher at Zillah High School in the Yakima Valley 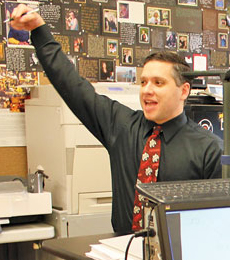 Photo courtesy of Council of Chief State School Officers region of Washington, had been named the 63rd National Teacher of the Year. Charbonneau’s statement on earning the Teacher of the Year accolade last spring could easily have been applied to the state’s and state legislature’s efforts to create a better business climate:

“I greet my students in class every day by saying, ‘Welcome back to another day in paradise,’ ” said Charbonneau. “The reality is that paradise must be built, maintained and improved each day. It removes the words ‘can’t,’ ‘too hard’ and ‘impossible’ from our vocabulary.”

The CERB funding was just a portion of the more than $30 million in investments the Washington State Legislature made in support of aerospace skills and training during the 2013 Legislature and its two special sessions.

Inslee says he’s been very engaged with Boeing on working through a regulatory issue involving the federal Clean Water Act. He says a final plan to present to Boeing will be unveiled later this year. But the moves the state is making are attracting notice from other quarters.

“It’s important to note that we have the entire cluster of aerospace here,” he says, including some suppliers to Boeing’s fiercest rival Airbus. Moreover, he says, “We have some interest, frankly, in our state from Airbus. Because of our tremendous talent pool, and also the financial arrangement of Airbus, there is a benefit to them to do some of their manufacturing in the [US] dollar. There is interest in our state in that regard.”