Savvy new reports spotlight global logistics costs,
trends and locations you might not have considered. 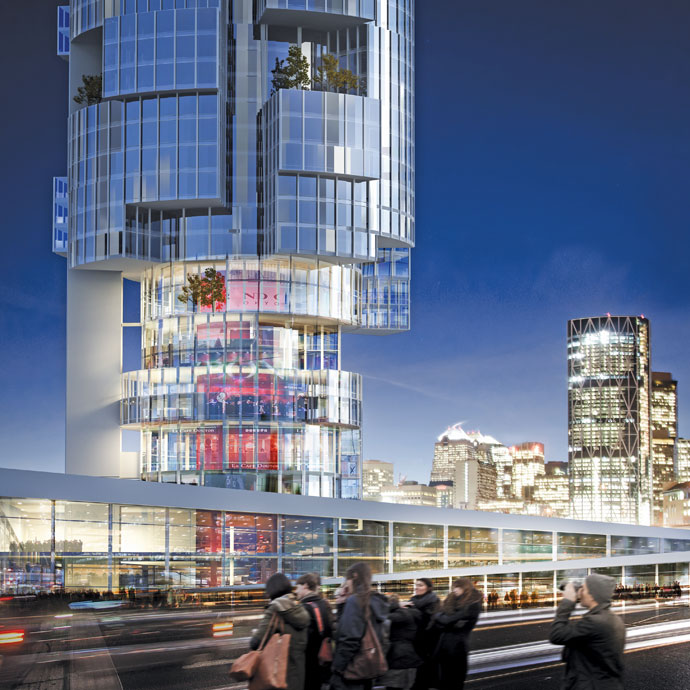 Riddell Kurczaba sees the future of distribution fulfillment on the rise, literally, in the form of vertical warehousing. The firm's concept, titled "The Swarm" and named a co-winner of the 2013 Distribution/Fulfillment Center Design of the Future honor from NAIOP, encompasses 800,000 gross sq. ft. (74,320 sq. m.), of which 63 percent is allocated for retail warehousing in the building's central core and the balance, comprising residential and office space, occupies the building's perimeter. Intelligent networks with light rail transit (LRT) lines streamline delivery of consumer and materials goods throughout the building, and customers can still access street-level retail stores.
by ADAM BRUNS
D

TZ in July released its Global Occupancy Costs Logistics 2013 report, not long after Prologis released its own close look at European logistics. Analysis from those experts and others offers not only an accurate picture of the way things are, but a well-informed framework for where they might be going.

"Looking forward, global logistics occupancy costs are projected to increase by a modest rate of 1.6 percent to the end of 2017, below the global inflation rate," said Karine Woodford, head of Occupier Research at DTZ and co-author of the report. "This is driven by increased future space supply across markets, which will limit potential rental growth. There are, as expected, significant differences between markets. While occupiers in Hong Kong and Milan are expected to benefit from falling costs, we anticipate rising costs in Dublin at 5.4 percent and Melbourne at 3.4 percent, supported by consistent tenant demand."

In the US, says DTZ, leasing activity picked up in 2012, with vacancy declines in all major markets. The biggest cost increases took place in the transport hubs of Houston (2.2 percent), Chicago (2 percent) and Atlanta (1.9 percent). Houston was the only market to see costs grow at a rate above the regional inflation average. There was strong demand for industrial space throughout the year, supported by the growth of Houston's port and the city's robust energy sector.

Site Selection asked the DTZ team where they're seeing the most promising infrastructure support for the industry. John Wickes noted the nearly universal deepwater port investment occurring up and down the US East Coast in anticipation of Post-Panamax ship traffic through the expanded Panama Canal. Rob Hall, DTZ's head of CEMEA logistics, said the European Commission's newly updated "Motorways of the Sea" project aims to establish a core transport network in Europe by 2030, and will be a key implementation tool in the deployment of the new European network.

Several Motorways of the Sea projects to be completed in the next few years will give further connections to and from the Baltic Rim.

"Currently, transport bottlenecks and missing links are affecting the East and South-East to West connections across Europe, seriously dampening economic growth in these areas," says Hall. Grants to member countries from the European Commission are intended to establish those links and smooth out those bottlenecks, and should be especially beneficial to less mature Eastern European markets which are already showing increased economic and manufacturing activity, he says.

"For example, Poland is becoming a key force in the European logistics platform, supported by improvements in the Polish road network," Hall explains. "The Baltic countries also have great growth potential as they provide gateways to Russia. In fact, several Motorways of the Sea projects to be completed in the next few years will give further connections to and from the Baltic Rim."

"Outside of Europe, India is currently seeing one of the most ambitious global projects - the Delhi-Mumbai Industrial Corridor (DMIC), aiming to boost the country's industrial and economic development by creating supporting logistics infrastructure," says Karine Woodford. "The project covers nearly 1,500 km. [932 miles] of land and links Delhi and Mumbai. Japan's government has committed to a significant investment for the project, planned on the lines of the Tokyo-Osaka industrial corridor. DMIC would be beneficial to both India and Japan in terms of development of ports, infrastructure and business parks."

Asked where they see the best location opportunities at the confluence of low costs and high efficiency over the next five years, Woodford noted how each end user's needs are unique, and that "proximity to customers and suppliers, availability and cost of work force, real estate cost and efficiency, as well as flexibility and inter-modality of infrastructure are the major defining criteria for site selection." That said, "From a pure cost perspective, our study reveals that globally the top five least expensive markets are dominated by the Chinese Tier II cities of Wuhan, Shenyang and Chengdu, with Atlanta in the US and Marseille in France completing the top five. Costs in all these markets are below US$70 per sq. m. [$6.50 per sq. ft.] per annum."

"In Europe we have noted that Germany and Poland have both shown great resilience in their logistics markets, with sustained high levels of demand from end users," says Hall. Logistics developer Goodman can attest to German demand, as it moves forward with a new export hub for Volkswagen in the Duisburg-Kasslerfeld port and logistics area of Duisport; another project for the automotive logistician Schnellecke in Leipzig as well as a distribution center for Daimler in Bremen.

Poland is becoming a key force in the European logistics platform, supported by improvements in the Polish road network.

DTZ's Hall says the subdued Eurozone economic backdrop and continued occupier caution "has meant that average European logistics costs remained stable during 2012, recording a growth of only 0.5 percent (in local currency terms). The lack of quality supply in several European markets prevented downward pressure on prime rents. However, total cost savings were realized in the more economically challenged southern European markets, with Rome witnessing the biggest fall (7 percent) on the back of rental decreases. Occupancy costs in Budapest also fell by 5.2 percent during 2012, reflecting tenants' strong position in lease negotiations. These locations therefore benefit from a strong 'low cost' advantage and could in the future attract a growing number of end users in search of good cost saving opportunities."

The limitation of any report is that some locations will be left out. Which locations missing from their 64-market study, we asked DTZ, might come onto the radar as opportunities for end users in the coming few years? 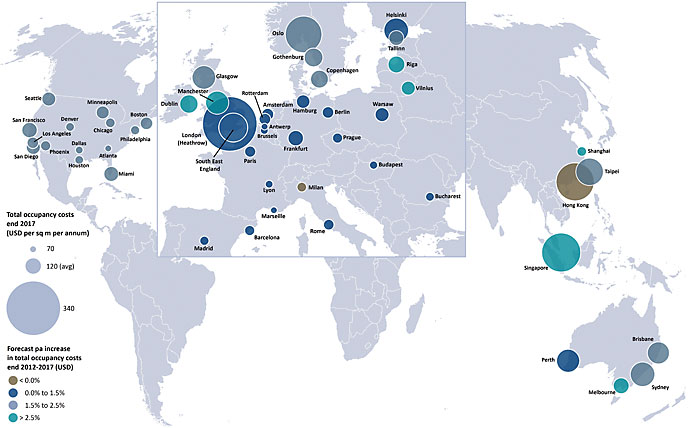 This map from DTZ's Global Occupancy Costs Logistics 2013 report shows where those costs and the facilities that bear them are headed.

"The economic growth and strategic geographical positioning of Eastern Europe means that the area will start to play a bigger role in the global supply chain," says Hall. "In particular, the Tri-City area (Gda´nsk, Gdynia, Sopot) in Poland is emerging as a European logistics hub as it benefits from rapidly expanding infrastructure and increased consumer demand. The Tri-city area has excellent access to national and international road, rail, air and sea transportation routes and is expected to operate as an important distribution bridge between Northern Europe, CEE and Western Europe. 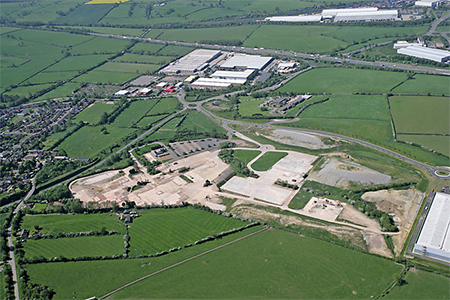 Gazeley this summer sold 64 acres at G.Park Crick, adjacent to the M1 at junction 18 in the center of the UK, to Costco for development of its European Distribution Campus.
Photo courtesy of Costco

"We also predict that the dynamic economic development of the so-called 'emerging markets' (i.e. Middle East, South America…) will fundamentally change world trade in the future and we expect the hubs of global flows of goods as well as trade routes to shift accordingly," says Woodford. "New logistics passageways will appear on our world map - passages between Asia and Africa, between Asia and South America and within Asia. As such, the expected relative weight of the flow of goods between the different continents will also change."

Woodford says future editions of the report "could include more emerging markets, such as Brazil, India and South America. We would also be keen on covering markets in the Middle East and Africa, which, like South America, are of growing interest to some of our clients operating global portfolios." 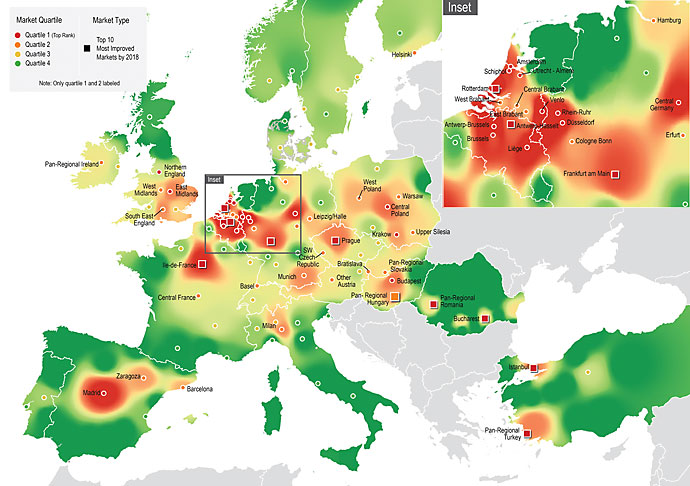 This heat map from Prologis highlights the strong locations for European logistics operations, led by top performers in Belgium and the Netherlands.
Image courtesy of Prologis

Getting Online To Serve Those Online

We also asked the experts about the influence of e-commerce on logistics site selection and facility planning. 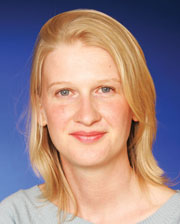 "For logistics real estate, online retailing has influenced the traditional process of choice in localization and building layout," says Woodford. "Sales are driven not only by product availability or prices but also by time and means of delivery. For Web-only retailers, access to a large market of consumers, an employment pool and transport infrastructure will influence choices of location. E-retailing is growing at a phenomenal pace in the emerging markets, in particular China, where it is driving demand for quality logistics space in a market that is currently extremely undersupplied. This is creating opportunities for major logistics providers to enter the market and 'build-to-suit' for e-commerce operators."

"In mainland Europe, France is one of the most interesting locations for e-retailers," says Hall. "The country profits from strong macro-economic prospects and an established logistics industry. The impact of e-retailing expansion on the logistics market is more balanced in the UK, Germany, Belgium and Spain, where a positive economic outlook is counterbalanced by a mixed picture for the logistics markets. The UK, for example, suffers from relatively high occupancy costs.

"Central and Eastern Europe is another attractive place for e-retailers willing to expand across Europe," he says. "Economic prospects are quite positive; however the logistics market is less mature and therefore e-retailers will have tended towards a 'click and collect' model rather than delivery."

No matter the geography, some are trying to envision the future convergence of e-trends in actual buildings. NAIOP announced in August that Ware Malcomb, a California design firm, and Riddell Kurczaba, based in Alberta, had been selected winners of the 2013 Distribution/Fulfillment Center Design of the Future. Both designs, NAIOP noted, attempt to deal with the challenges e-commerce presents. The firms will present their concepts in October at Development '13, NAIOP's annual conference in San Diego.

One Campus, Under Roof, With Proximity and Access for All

Prologis, partnering with eyefortransport (eFt), this summer issued a report on Europe's most desirable logistics locations (see map). The top three locations were found to be in the Netherlands and Belgium: Venlo, Antwerp-Brussels and Rotterdam.

Looking to 2018, the Prologis results show that Venlo will remain the most popular location, although its sizable lead over the other top four locations decreases," said Prologis. "The results also show that locations in Central & Eastern Europe will gear up and become more attractive in the European logistics landscape. Logistics facility users continue to consolidate their operations in larger, more efficient Class-A distribution centers and plan to operate in larger networks. Almost two-thirds of all respondents expect to operate a pan-European distribution network [as opposed to national/local networks] by 2018." 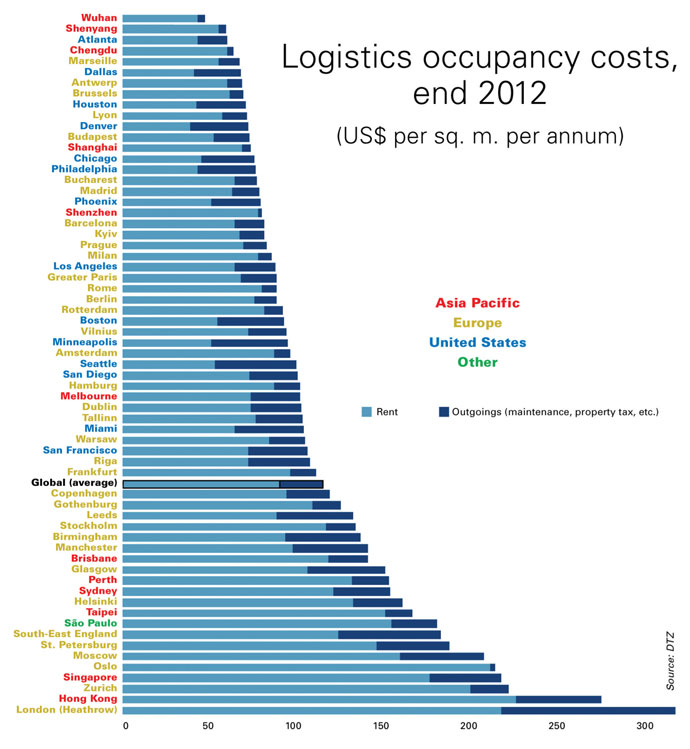