he Keystone State may have unlocked the key to sustainable economic recovery: reducing the overall tax bill and freeing business from the burden of over-regulation.

If that sounds unfamiliar to observers of Pennsylvania politics, it may be time for them to take another look, say business leaders who are watching these changes take hold firsthand.

“The overall business climate in Pennsylvania is very good and is continuing to get better,” says Dan Fitzpatrick, Citizens Bank president for Pennsylvania, New Jersey and Delaware and chairman of the Greater Philadelphia Chamber of Commerce. “There have been a number of tax reform initiatives that have been enacted into law. The phasing out of the capital stock and foreign franchise tax has been very good. That tax was a disincentive for companies to build and invest in Pennsylvania.”

Since taking office in 2011, Gov. Tom Corbett has enacted a series of tax law changes designed to put more capital into the hands of expanding companies. In 2011, he signed into law a single sales factor apportionment for taxable years beginning in 2013. The move encourages businesses to locate within the commonwealth by weighing the tax base less on their presence in Pennsylvania and more on their sales in the state.

Also in 2011, the governor completed unemployment compensation debt refinancing, saving Pennsylvania businesses an estimated $150 million over seven years and providing for the long-term solvency of the system.

“My policy for growing the Pennsylvania economy is simple — more jobs, less taxes,” says Gov. Corbett. “Keeping taxes low keeps confidence high and that’s what drives business growth. It sends a clear message that if you are an entrepreneur with a strong business model or you are a growing business looking to expand, Pennsylvania is where you want to be.”

One of the governor’s earliest victories came with the passage of joint and several liability reform in 2011. As a result, Pennsylvania is no longer one of a handful of states where the legal system can hold a person, company or local government agency liable for 100 percent of damages despite that entity having only a minor role in any incident generating a lawsuit.

Other major initiatives pushed through by Corbett include: 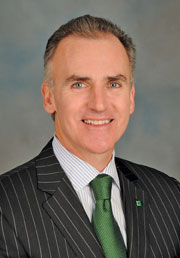 Dan Fitzpatrick, Citizens Bank president for Pennsylvania, New Jersey and Delaware and chairman of the Greater Philadelphia Chamber of Commerce

On top of all these measures, the governor overhauled the state’s permit review processes. As a result, the Pennsylvania Department of Transportation now takes an average of just nine days to review permit applications and the Department of Environmental Protection now provides regulatory certainty, clarity and consistency across the DEP’s six regional offices.

The changes have had an immediate impact on business growth. Since January 2011, Pennsylvania ranks second in the nation in job growth, adding more than 130,000 jobs.

“Our unemployment rate remains the lowest it has been since the recession and businesses now want to come here, hire our workers and grow in Pennsylvania,” Gov. Corbett adds. “It’s a sign we are heading in the right direction and Pennsylvania’s economy is on the rise.”

This rise is reflected in a number of expansion projects recently announced in Pennsylvania. In the 2012-2013 calendar year, the state recorded 259 new corporate project engagements and 126 offers of assistance. Through the first two quarters of 2013, the state has already registered 135 new project engagements and is seeing increased interest from expanding companies.

On Aug. 13, the Curtiss-Wright Corp. announced that it will relocate a flow control facility from New Jersey to Bethlehem, Pa., and invest more than $7 million to support the move. The relocation project adds 95 jobs in Northampton County.

“We are thrilled to be relocating our operations to the Lehigh Valley and look forward to supplying our mission-critical products and services from our new, modern manufacturing, testing, warehousing and office facility,” said Todd Schurra, general manager for the global engineering and manufacturing company, which is building a 179,000-sq.-ft. facility.

On Aug. 8, Georgia PrintCo Northeast, a digital graphics manufacturer, announced that it will locate operations in Luzerne County and bring 25 jobs to the region. The company plans to purchase a 32,000-sq.-ft. facility in Pittston Township and invest more than $2 million into renovations, site improvements, new equipment and employee training.

Citizens Bank’s Fitzpatrick says projects like these are a sign of things to come in Pennsylvania. “I believe the message is getting out about Pennsylvania’s improved business climate,” he says. “I applaud the governor for his trips abroad. Pennsylvania is definitely letting companies in other parts of the country know about our valuable resources and that we are open for business.”

Chris Masciantonio, general manager of governmental affairs for U.S. Steel in Pittsburgh, says that “the improvements in the corporate tax structure have been the most helpful in terms of elevating our business climate. Increasing the cap on the net operating loss carried forward is especially helpful to manufacturing companies like ours. And the legal reform that was signed into law was a big improvement for Pennsylvania. All of these changes are indicative of what the governor and the legislature are trying to do.”

U. S. Steel completed a $500-million investment into a new coke battery at the company’s Mon Valley Works plant (shown below) this year. The Clairton Plant C Battery Investment Program “represents our confidence in doing business in Pennsylvania,” says Masciantonio.