Major high-tech investments in the same location — Saxony-Anhalt capital Magdeburg — are not a coincidence.

wo of Europe’s most significant IT capital investment projects just landed in the same region — the federal German state of Saxony-Anhalt. That should put to rest the notion that the state is best-suited for heavier industries, such as the plastics and chemicals, automotive and renewable energy sectors. Saxony-Anhalt is ideal for those sectors too, but more than 500 information technology and communications (ICT) companies already operate in the state.

“There has been a rapid development of the IT business in Eastern Germany in the last few years,” says Dirk Bartens, chairman of the board of VITM, the IT association of Saxony-Anhalt. “Many IT start-ups have been founded, and they are quite successful in international markets. Saxony-Anhalt’s IT companies employ 13,000 persons,” he points out, a number that has been rising even during the economic turmoil of 2008 and 2009. “Even the volume of sales has increased during this time,” says Bartens. “It shows the strength and innovation of our IT manufacturers.”

State capital Magdeburg will soon be home to Germany’s largest data center, which Deutsche Telekom subsidiary T-Systems is now building, and IBM’s new IT Services Center. Combined, the projects will add an additional 430 high-tech jobs to the region’s work force over the next few years, adding more weight to the state’s high-tech labor credentials.

T-Systems announced its 90th and largest data center in October 2012; it is scheduled to open in 2014 and is forecast to employ 130. According to the company, this data center will be built on a surface area the size of approximately 30 soccer fields, or 150,000 square meters. Together with a data center already running in Magdeburg, the new construction in Biere will form a “TwinCore,” i.e., a twin data center, which offers the highest level of data and operational security. In the last expansion stage at both locations, an area of almost eight soccer fields will be exclusively dedicated to cloud computing technology — more than in any other data center across Germany.

Size alone is not what distinguishes this facility. Its function is the key, explains Nicole Schmidt of Deutsche Telekom. “Deutsche Telekom/T-Systems is expanding its cloud computing offering. Already today, many large customers of T-Systems use cloud services, and this will continue to increase. Therefore we require new data centers in order to meet the increasing demand for computing and storage. The new data center in Saxony-Anhalt will be our 25th data center in Germany. For our business customers who use cloud computing, it is important to know where their data are located. That’s why data centers in Germany, where strict German data protection is binding, are of particular interest.” 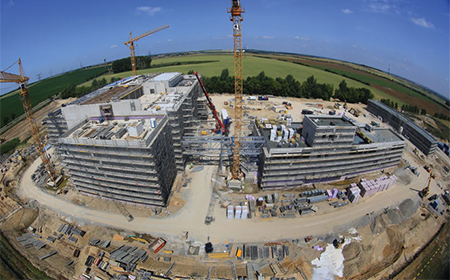 As for Saxony-Anhalt, “We were looking for a location for a twin data center,” Schmidt says. “In the state capital Magdeburg, a Deutsche Telekom data center already exists. The nearby town Biere provides an optimal network connection and ample space with few external influences, such as flood, earthquake and approach paths to airports. This combination was convincing.”

Dirk Bartens identifies four additional reasons IT investors should consider a Saxony-Anhalt location: “First, investors will find well-trained young IT professionals, because the computing faculties of our universities and colleges educate students at a high level,” he says. “These students are very attractive for the job market. Second, Saxony-Anhalt provides a wide range of companies for advanced training, which educate employees in every sector of IT.” A third reason is the state’s “excellent infrastructure,” says Bartens, and fourth: “Our federal government supports investors [with a] regional entity in order that they feel comfortable during the process of settlement.”

Adds Deutsche Telekom’s Schmidt: “Saxony-Anhalt offers universities for the next generation of ICT specialists, suitable land and infrastructure coupled with investor-friendly economic policies. Therefore, Saxony-Anhalt has the potential to establish itself as a reliable IT location far beyond the German borders.”

Dell is expanding its Halle/Saale technical support operation, where it now employs more than 800 — it started at the location in 2005 with 200 employees. In early 2013, Dell Deutschland General Manager Barbara Wittmann noted in an interview with IMG that the Halle location has exceeded expectations.

“For us, the site is very attractive. It is the largest Dell site in Germany, followed by Frankfurt with 400 employees and Munich with 100 employees. From the very beginning, we saw the developmental potential in the metropolitan area of Halle/Leipzig with a catchment area of over 1 million people, and that was even across the state boundaries. Next to Berlin, this is the largest economic centre in the new federal states.”

Wittman said a number of factors deliver strategic advantages, including “the cities with their good infrastructure, as well as the proximity to universities and technical colleges such as Halle and Leipzig, as well as Magdeburg, Wernigerode and Dessau with their versatile, specialized disciplines. This is a chance for us to find new employees. To do this, we rely on a huge range of qualifications, such as business studies, in technical disciplines as well as those completely outside our specialist areas, such as the arts. We are very open in terms of this and have always done well with this strategy up to now. In addition, there are also a large number of well-educated people in the non-academic sector here. I am astonished that more companies are not using the opportunities here. We, as a global company, have done it. There is a good environment here.”

IBM’s IT Services Centre in Magdeburg will create up to 300 new IT sector jobs in the next three years. According to IBM, the Centre is part of a global initiative by IBM to systematically strengthen its local presence by offering IT services locally, but it will serve international clients as well. Services are to include development and maintenance of IT applications and consulting and systems integration for local and international clients. In this way, IBM can satisfy its customers’ growing demand for flexible solutions which enable them to make optimal use of the potential offered by innovations such as big data, cloud and mobile business technologies.

Is there a common denominator linking these recent IT capital investment projects?

“They underline the tremendous environment for IT business in our federal state,” says Dirk Bartens. “Within the next few years T-Systems and IBM will create hundreds of new jobs.

This will boost the IT sector, because this kind of [investment] usually attracts other firms as partners or suppliers. It is expected that there will be a huge benefit for the long-established companies. And there will be ever closer cooperation with our universities and colleges, which will deepen the relations between the IT industry and science.”

This investment profile was prepared under the auspices of IMG, the Investment and Marketing Corporation of Saxony-Anhalt. For more information, contact: Kristin Gabor, regional manager for North America of IMG at +49 391 568 99 22 or by email at kristin.gabor@img-sachsen-anhalt.de. On the Web, go to www.invest-in-saxony-anhalt.com.