Fresh from a visit to Greater Toledo, national consultants shed some light on perceptions, misperceptions and outright truths. 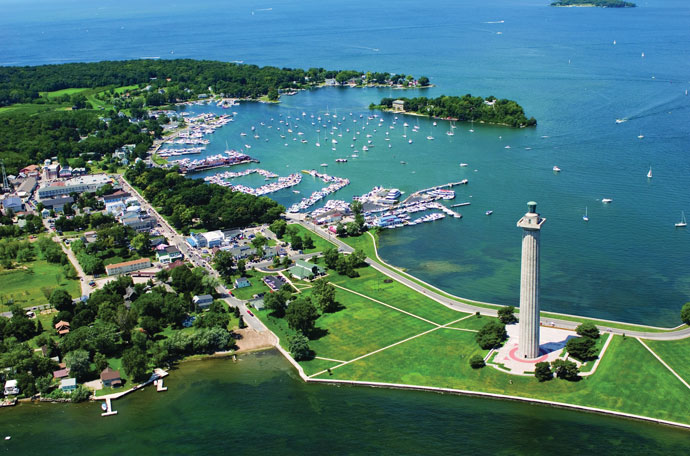 Above: Put-in-Bay on South Bass Island has been an ideal stopping point for boaters ever since Native Americans “put in at the bay” during journeys across Lake Erie. In September the popular spot hosted a 12-day celebration with a Tall Ships Festival to commemorate the Bicentennial of the Battle of Lake Erie during the War of 1812.
Photo courtesy of RGP
by ADAM BRUNS
E 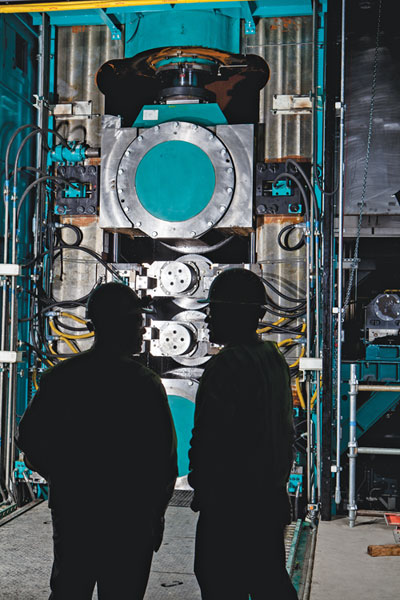 arly this summer a group of site consultants from across the country came to visit Northwest Ohio. The agenda included a helicopter tour over select greenfield megasites in counties including Lucas, Wood, Fulton, Putnam and Van Wert; information on the Overland Park Brownfield Redevelopment Project (the former Jeep site); and some rest and relaxation on the Lake Erie Islands off Port Clinton, all courtesy of the Regional Growth Partnership.

But one of the consultants (who’s also a frequent contributor to Site Selection) noticed the first courtesy right away.

“It was smart, really smart, when the economic developers essentially got out of the way to let the business people do the talking for Northwest Ohio,” writes veteran journalist and economic development expert Dean Barber of Barber Business Advisors. “At that point, I felt I wasn’t so much being sold as being informed. And being informed always helps me overcome preconceived notions.”

If any area of the country struggles to overcome those notions, Toledo does. So we put one question straight to those consultants:

“What were you most surprised to learn during your visit to Greater Toledo?”

Even before we asked, Barber was out of the gate with one of his increasingly popular blogs, and told us to quote from it at will. So we will:

“As a site selection consultant, I have learned that every community everywhere has a motivated work force,” he writes, not to mention a central location. How does he know it? “The economic developers have told me so,” he quips. “But when I hear major employers talk of a skilled work force, of a loyal work force, well, I am going to sit up and listen. 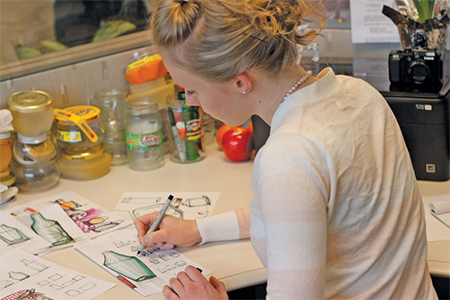 The natural resources and talent of Greater Toledo have drawn industry for decades, including glass container maker Owens-Illinois, which maintains its headquarters in Perrysburg and which last year committed to a new $35-million, 45-job R&D center.
Photo courtesy of O-I

“I was also hearing — surprise, surprise — that they were operating non-union,” he writes. “For me, it was the biggest elephant in the room — that union legacy of Toledo.”

In fact, private-sector union membership in the Toledo MSA is 6.9 percent, not far above the historically low 6.6-percent rate nationally. But a bigger surprise may be that even without the right-to-work status of newly converted states next door, operating non-union in Ohio is no big deal.

“Heck, two steelmakers — North Star Bluescope Steel and PRO-TEC — are doing it,” writes Barber. “ ‘If you treat people with respect, you get it back,’ said Brian Vaughn, president of PRO-TEC, based in Leipsic. Vaughn said workers at the Leipsic plant are disinterested on the prospect of unionization. ‘They certainly don’t seem to have a palate for it at all,’ he said.” 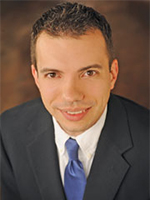 “We are very beyond the issue of union and non-union,” Rich Menzel, vice president of human resources at North Star in Delta, told Barber. “We are at a point where our employees would never sign a card. We are thinking of being a world-class work force.”

“This is coming from steel companies, usually the poster child for union labor,” says Jason Hamman of Hamman Consulting Group, who was just contacted by a large industrial firm whose first concern was the union atmosphere. “They have innovative ways to reward their employees,” he says of the Toledo-area companies he encountered, “and don’t feel the threat of unionization at all.”

“There were several things that surprised me,” says consultant Greg Elam of Step Resources in West Chester, Ohio, “but I believe the most pronounced thing that stood out about Greater Toledo was the availability of resources and proximity of everything. The resources include the Toledo-Lucas County Port Authority and their funding capabilities, and the connection of the local work force to the university-supported labor pool, thus providing a sustainable work force.”

“The RGP understands their strengths and weaknesses and is actively working to improve the weaknesses,” says veteran logistics consultant Tim Feemster of Foremost Quality Logistics. “Their dedication to changing the issues is impressive.”

Hamman says the running joke during his Toledo visit was that “everything seems to be 20 minutes away. So from a quality-of-life standpoint, it’s a big city with a small-town feel. Transportation, especially the highway network, is easy for commuters as well as for distribution of goods. Toledo is right at the crossroads.”

Hamman has worked on a number of rail-related projects in his career, and says the rail infrastructure that connects to the Port of Toledo is “just amazing. They have the whole package in terms of being able to move goods in and out efficiently, whether by water, rail or highway.”

From a cost-of-living standpoint, relative to other larger metropolitan areas, Hamman calls the area very affordable. “With work force being such a key component, the same salary in Toledo affords workers a better lifestyle.”

A consultant from the Southeast, like his compatriots, was surprised by “the employee-employer relationship and success stories despite preconceived notions of right-to-work states.”

“I was most surprised and impressed by how integrated the stakeholders seemed to be in the Toledo area,” says Lisa Niscoromni of Hickey & Associates. Russ Ullinger of Arizona-based Foote Consulting agrees.

“The state and Regional Growth Partnership, along with private industry and the educational organizations, have great relationships with a ‘can do’ attitude,” he says. “[RGP President and CEO] Dean Monske and his staff are impressive, and a host of incentives are available for good projects.”

Last but not least, the group discovered the charms of the Lake Erie Islands, from the festive atmosphere of Put-in-Bay to the history and serenity of Rattlesnake Island. Hamman, a Northeast Ohio resident, had seen the islands before, but got a kick out of others’ first encounters with the landscape.

“The look on their faces was priceless, because it’s absolutely beautiful,” he says. “I think they were really blown away that this was in Ohio. Outside of the Midwest, very few people realize the recreational amenities Lake Erie has to offer.”

Even if you’re from inside the Midwest, it can pay to look again.

“It was good for me,” Hamman says of the visit. “Often you tend to overlook what’s in your backyard.”

This Investment Profile was prepared under the auspices of the Regional Growth Partnership, which plans to host more tours in the future. For more information, call 419-252-2700 or visit rgp.org.