Educational institutions provide the learning infrastructure that
keeps the Commonwealth a science and technology leader. 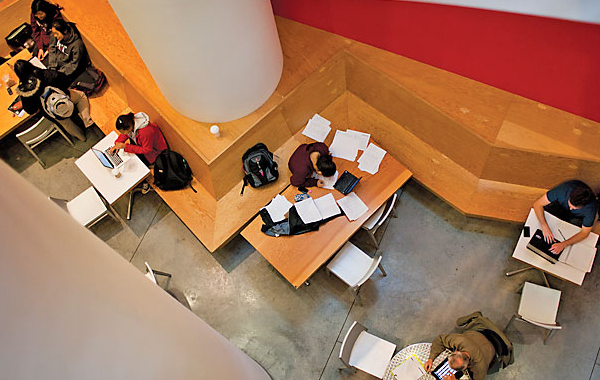 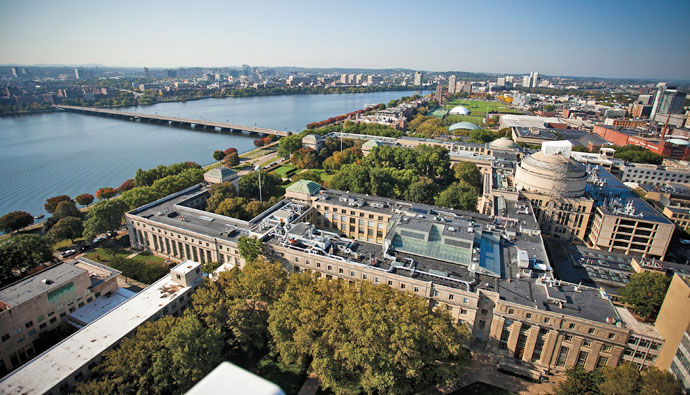 There’s no better example of how high knowledge attracts high-tech than the Massachusetts Institute of Technology.
Photos by Dominick Reuter courtesy of MIT

Milken Institute’s fifth edition of its biannual State Technology and Science Index, issued this spring, revealed that competition at the top was getting more fierce. But that didn’t keep Massachusetts from ranking No. 1 for the fifth time in five tries over the past decade — this time by a wider margin.

“Massachusetts ranked first — again — with its highest score ever,” said the report. “By widening the gap between it and other states, Massachusetts has further cemented its lead in science and technology … To say that Massachusetts, with world-renowned universities and cutting-edge firms, has the right technological and scientific assets is an understatement.”

The index is composed of five equally weighted composites composed of 79 indicators that establish common ground for comparison and analysis. Those composites are the following:

“Massachusetts not only claimed the top spot but also pulled even farther ahead of the pack,” reported Milken. “The state scored 86.40 in the overall index — the best it’s ever done — and widened the gap between it and second-place Maryland. Massachusetts is by far the most dominant state, placing first in all but one of the five composite indexes that make up the overall rankings. Even in its weakest area— technology concentration and dynamism— Massachusetts still ranked sixth, which was a small improvement over seventh in 2010.”

The state also increased its scores by more than seven points in risk capital and entrepreneurial infrastructure and almost 10 points in human capital investment. As Milken notes, the Commonwealth’s $1-billion Life Science Initiative continues to make headway even amid the headwinds of the recession. Other progress has been made in STEM education and innovation cultivation. “Finally,” says Milken, “the Massachusetts Technology Collaborative [www.masstech.org], a unique public economic development agency, is another sign that key actors in Massachusetts understand the importance of technology and science.”

Here are Milken’s observations about Massachusetts’ performance across each of the report’s five composite areas:

“Massachusetts has dominated this category since the inception of the State Technology and Science Index, and this year is no exception. While its score is slightly lower than in 2010, it far outpaces that of second-place Maryland. Massachusetts’ strong showing in this composite is due largely to its first-place performance in all SBIR [Small Business Innovation Research] and STTR [Small Business Technology Transfer] indicators. It also ranks fifth or higher in all but two of the 18 indicators.”

“Massachusetts once again ranks first on the risk capital composite index. Its overall score increased a dramatic seven points, which padded its lead over second place. Massachusetts ranks in the top five on nine of the 12 indicators in the risk capital category and ranks first on four of them. The state does particularly well on indicators involving venture capital investment, patents and business starts.”

This finding is backed by separate research conducted by The Angel Resource Institute (ARI), Silicon Valley Bank (SVB) and CB Insights and revealed in their Q1 2013 Halo Report released in July. Among its findings: 81 percent of angel groups’ investments over the previous 12 months were made in their home states. While the Southwest, with 18.1 percent, and California (17.4 percent) led the country in their regions’ shares of angel group dollars, Massachusetts and its fellow New England states racked up 13 percent to snare third place by region. Moreover, California and New England continue to receive 30 percent of all angel dollars invested.

“Massachusetts ranks first on the Human Capital Investment composite for the first time since 2002,” said Milken. ”The state turned in an incredible performance with a score more than 10 points higher than in 2010 (84.67 vs. 75.24) and a seven-point lead on second-ranked Maryland. In contrast, most states’ scores were roughly the same as in 2010, and the overall point distribution changed only slightly. Massachusetts’ most notable area of improvement was a jump from 47th to fourth in the percent change in appropriations for higher education per capita.”

Streetcar Suburbs Are In

Richards Barry Joyce & Partners, LLC (RBJ&P) in August represented Preotle, Lane & Associates Ltd. (PLA) in a 40,475-sq.-ft. lease agreement that brings 200 River’s Edge Drive, a LEED-Gold certified office/lab building in the River’s Edge Mixed Use Development in Medford, Mass., to full occupancy.
The 10-year lease was signed with Management Sciences for Health (MSH), an international nonprofit organization whose mission is to save lives and improve the health of the world’s poorest and most vulnerable people. MSH is relocating its corporate headquarters from Cambridge in late 2013. River’s Edge, within walking distance of the Wellington MBTA Station, is 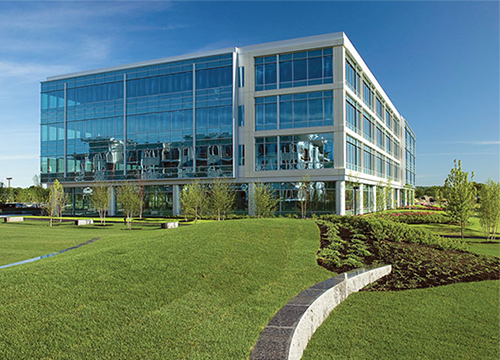 one of several new first-class, mixed-use projects near Boston/Cambridge, and is is highlighted by an award-winning, 10-acrepark fronting the Malden River. In addition to luxury housing, subsequent phases are planned to include two additional office/lab buildings totaling 295,000 more sq. ft.
RBJ&P says the transaction follows a trend of increased leasing velocity in Greater Boston’s Streetcar Suburbs, or Inner North submarket. According to the firm’s research, during the four-quarter period ending with the second quarter of 2013, leasing activity has averaged 105,000 sq. ft. per quarter, almost double the five-year quarterly leasing average prior to this period. The River’s Edge mixed-use development in Medford is one example of what Richards Barry Joyce & Partners identifies as a decided trend toward Greater Boston’s “streetcar suburbs.”

Marlborough is another outskirt on the inside track: The city is now home to more than 30 life science technology companies, including major moves into former HP space by Boston Scientific and Quest Diagnostics.

“Once again, Massachusetts ranks first in this composite though its score dropped almost two points to 87.65. Massachusetts performed well across the board: It ranks in the top five in 11 of the 18 indicators in this composite and came in first in four (biomedical engineers, medical scientists, microbiologists, and software engineers). This is largely due to the number of universities, research facilities, hospitals, and high-tech employment clusters.”

This category includes measures such as the percent of establishments, employment and payrolls that are in high-tech categories. It also measures growth in a number of technology categories. “Massachusetts’ sixth-place rank is notable as this is the only composite where the state does not rank first,” said Milken. 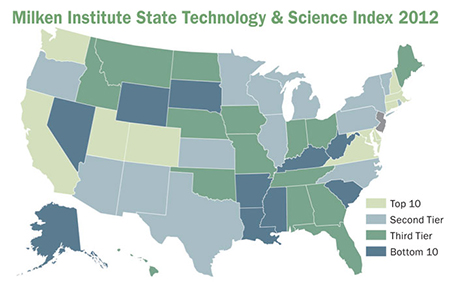 The 2012 Milken State Technology and Science Index found Massachusetts at the No. 1 spot again. It also showed that the Commonwealth is surrounded by strong neighbors.

Milken’s findings are being bolstered by the latest statistics. An August report on US Bureau of Labor Statistics data from technology career website Dice.com found that Massachusetts ranked second in the country to New Jersey in technology job growth during the first half of 2013, adding 2,600 jobs. Based on technology job openings, Boston was sixth in the country with more than 3,000.

The Latest from MIT

This fall, MIT will select an urban-design firm to help it develop and complete a design plan for the redevelopment of Institute-owned property in Kendall Square.

In April, MIT’s rezoning petition for its Kendall Square initiative was approved by the Cambridge City Council following a three-year, community-wide effort to align the interests of a broad group of stakeholders around the future vision for Kendall Square. The Council’s approval gives MIT the ability to propose up to 1.1 million sq. ft. of new development, which will be a combination of housing, retail, lab, commercial and open space. MIT also continues to have the right to 800,000 sq. ft. in new academic development, which it had prior to the rezoning petition.

MIT’s vision is to transform 26 acres of Institute-owned property in the Kendall Square/East Campus area “in order to bring new vibrancy to the Kendall Square Innovation District. The new zoning preserves existing academic development potential and enables the creation of new housing, retail, lab and commercial space, as well as more engaging open space and wayfinding,” says the Institute.

According to MIT, most new construction will take place on underused MIT-owned parking lots, and an important goal will be to enliven the area and better connect the campus to the neighborhood and business district in five ways:

“I am thrilled by this vote and grateful to the City Council and the people of Cambridge,” said MIT President L. Rafael Reif in April. “Kendall Square is one of the world’s most impressive innovation ecosystems. This decision will allow MIT to do its part to make this place as lively and energizing on the ground floor as it is in the laboratories and offices above. I believe it will also strengthen the vital ties between MIT and the City of Cambridge — and that can only be for the good.”

In consideration of its receipt of rezoning approval, MIT has agreed to offer $14 million of community support to the City of Cambridge; about $4.3 million to the City’s Affordable Housing Trust; and $20,000 annually for 10 years to an Apprentice Pathways Program to train Cambridge residents for construction jobs. MIT estimates that its proposal will allow development that adds about $10 million annually in new tax revenue for Cambridge, as well as $9 million in new permit fees. It further estimates the creation of 2,500 permanent new jobs, and about 1,300 construction jobs.

Steve Marsh, MIT’s managing director of real estate, in April called the approval “very good for MIT and for the city” and lauded the collaboration that led to the petition’s progress.

“This petition is as strong as it is precisely because it was shaped by the hands of its stakeholders,” he said the day after the vote. “MIT and Cambridge are now poised to create a truly special place.”