Companies today know that they compete in a global marketplace. Access to talent, other production requirements, transportation and many other factors that can provide executives with a cost or quality advantage are high on site locators’ matrix in recommending communities and sites to their clients. 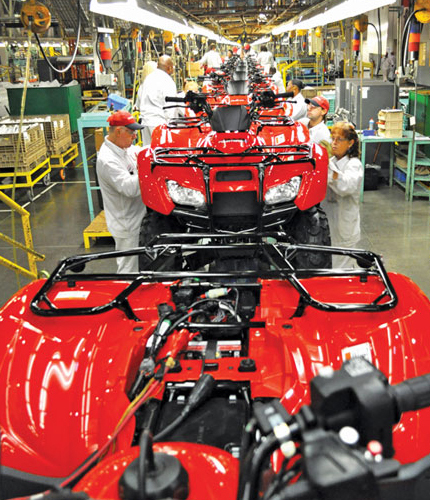 Honda operates this ATV assembly facility in the rural community of Timmonsville, S.C., just west of Florence near the I-20/I-95 junction, where the company in June celebrated 15 years doing business there by announcing a $27-million, 65-job expansion to produce the new Pioneer model.
Photo courtesy of Honda

Given the resources available in rural America, some companies are finding that urban locations, where they are “one of many” employers, are not without problems — finding talent, maintaining local political support and addressing higher costs of operation, to mention a few. Rural communities, on the other hand, offer certain advantages that make them attractive alternatives from the perspective of a lower cost of operation and enhanced quality of life for employees.

Over the past 15 years, counties in South Carolina have come together to create seven regional economic development alliances to improve their competitiveness. This structure has enabled rural counties to more easily identify with the obvious assets of an urban core while offering employers a lower-cost place to make products or provide services. Encouraged by the state’s pro-business legislature, which provided $5 million in 2013-14 to assist in carrying out marketing programs, regional alliances have streamlined the flow of information between rural economic developers and prospective companies.

The state’s extensive Interstate highway and rail system connected to the deepwater port of Charleston provide the transportation structure to connect the region to world markets. Approximately one third of the Port of Charleston’s container volume is tied to the Southeast region’s agricultural and forestry industries.

Structure needs a plan of organization. The South Carolina model also incorporates both the public sector (through the South Carolina Department of Commerce, or SC DOC), and private-sector utility allies to create product and market that product globally. The SC DOC utilizes a rural strategic plan to assist county leaders in creating an environment which supports locating companies and encourages existing companies to expand.

The most recent Census Data shows that nearly 95 percent of the United States is rural open space, and slightly less than one in three Americans lives in an area that would be considered non-urbanized.

In 1996 the Rural Infrastructure Fund (RIF) was created by the South Carolina legislature to provide financial assistance to local governments, primarily rural counties, for infrastructure and other economic development activities. RIF funding, created from a portion of the payroll tax from locating companies, has been utilized to pay for such projects in rural communities as water and sewer facilities, drainage and shell building construction. To date, over $78 million has been invested in rural infrastructure through the RIF, $14.3 million in 2012 alone.

Work Ready Is For Real

Companies also need a qualified work force. Many rural communities are addressing the need in their work force planning by adopting the Certified Work Ready Communities program, a national effort that builds on the ACT WorkKeys jobs skills assessment system.

South Carolina is one of the initial states participating in the pilot of this initiative. The primary goal is to link education and work-force development and align them with the economic development needs of the state. All 46 counties in the state have signed on to become Certified Work Ready Communities. Clarendon County, S.C., is the second county in the nation that has met 100 percent of ACT’s National Certified Work Ready goals. (The first, Jasper County in southwestern Missouri, was profiled in the July 2013 issue of Site Selection.)

Bobby Hitt, South Carolina’s Secretary of Commerce, believes these strategies are essential to capitalize on the state’s strong agricultural and forestry resource base. That resource base represents $34 billion in economic impact for the state and nearly 200,000 jobs.

“While the emotion and energy of the Department of Commerce is to create jobs and impact all areas of the state, we have a targeted approach toward growing and developing the state’s rural areas,” says Hitt. “From hiring the state’s first agribusiness project manager, to investing millions of dollars in grant money to support infrastructure projects in our rural communities, Commerce continues to show its commitment to preserving our hometowns, and creating economic growth in our rural counties.”

In 2006, Santee Cooper, South Carolina’s electric generating and water utility, and the state’s 20 electric cooperatives set out to make the state’s rural areas more competitive. Three initiatives were created and funded to help identify, enhance and promote the rural product. Those initiatives included strategic planning assistance for county and regional development organizations, the creation of certified industrial sites and professional development training to support local economic developers in the state.

The South Carolina Power Team, the economic development arm of Santee Cooper and the state’s electric cooperatives, was tasked with implementing these initiatives. Over the past seven years the SC Power Team has funded strategic marketing plans for economic development in 32 rural areas of the state, providing over $1.3 million to identify assets in those areas that could be maximized and weaknesses that must be addressed. This funding also identified certain industries that typically require those attributes and help fund the implementation of those plans. 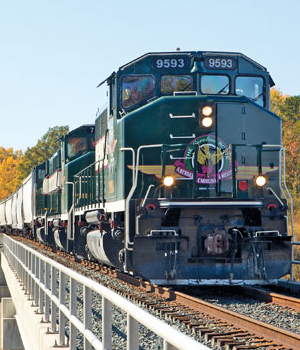 An Aberdeen Carolina & Western Railway Co. locomotive makes its way across a bridge near I-485.
Photo courtesy of ACWR

The southernmost Carolina does not have a monopoly on rural economic development. In August the Aberdeen Carolina & Western Railway Co. (ACWR) announced it would move its headquarters to Candor, N.C., and form a new subsidiary, ACWR Shops, LLC, that repairs and retrofits locomotives, as well as passenger and freight cars. The company has acquired and began retrofitting the former Commodore Homes building on Highway 220 in Montgomery County.
The company plans to create 25 new jobs and invest $3.3 million over the next five years in the facility. Currently, ACWR employs 34 employees at its home base in Star, eight miles away.
The longer-term goal for the Candor location is to develop the rest of the 78-acre industrial site.
Candor is located near the Uwharrie National Forest and is perhaps best known for hosting the North Carolina Peach Festival, held yearly on the third Saturday in July.
The project was made possible in part by NC Department of Transportation funding through the North Carolina Legislature that is set aside for rail projects that will stimulate economic activity and create new jobs. Other partners in the project include Montgomery County Economic Development Corporation, Montgomery County, The Town of Candor, Duke Energy Progress, and the North Carolina Department of Commerce.

The second program, creation of certified sites in rural areas, was coordinated with the highly successful certified site program initiated by SC DOC in the early years of this century. In 2010, SC DOC engaged McCallum Sweeney Consulting to redesign and execute an upgraded statewide site certification program. Since that time, a rigorous program, with industry-based criteria in areas of Availability, Develop-ability and Serve-ability, and an exhaustive review and evaluation process, including site visits, has resulted in 63 sites being certified across the state. In support of the SC DOC site certification program, the SC Power Team’s second initiative has provided rural communities a total of $945,000 to certify 25 of those 63 sites, including a 1,920-acre megasite on I-95 in rural Dillon County.

Earlier this year, the SC Power Team, working with the North Eastern Strategic Alliance (NESA), also funded the certification of the state’s first two enhanced certified food sites by the Austin Company. Those sites in Florence and Marion Counties were selected because of their proximity to a number of other food companies, a work force familiar with the food industry and the location of those sites in the agricultural belt of the eastern part of the state.

Another essential required by locating companies today is access to broadband. Rural telecommunications companies are bringing broadband, a key element of global market access, to smaller communities, providing the same speed and capacity required by manufacturing and service companies in urban locations. Facilitated by federal universal service policies, manufacturers now have access to the fiber and broadband needed to reach customers and suppliers worldwide.

Shannon Butler, external affairs and government relations manager at West Carolina Telephone Cooperative, headquartered in Abbeville, S.C., says, “$2 billion dollars are available to rural telephone companies each year through the Federal Universal Service Fund to provide world class telecommunication services throughout rural America. Today we can supply all the broadband a company needs, at competitive rates, when they need it.”

What is the return on these investments? Since 2011, South Carolina has recruited more than $1.28 billion of investment in new and expanded facilities in the state’s rural counties while more than 8,700 jobs have been created in those counties. Last year South Carolina announced 23 agribusiness companies either expanding or establishing operations in the state. The capital investment for those projects is more than $250 million and will create more than 1,000 jobs.

Successful rural economic development requires the involvement of public and private sector organizations in a collaborative effort to create the product, provide infrastructure, mobilize rural community leadership and then promote the opportunity. The South Carolina model provides a framework for how its rural areas can be successful in that effort.

Fred Gassaway, a founder of the National Rural Economic Developers Association whose career spans over 30 years in the field, is executive vice president for marketing for South Carolina Power Team.