A New Wisconsin Revs Up

Packers’ fans aren’t the only folks cheering in Wisconsin; industry leaders
in energy and software like the changes they see coming out of Madison.

Wisconsin-based Virent Inc. manufactures the bio-gasoline that is used to power this Formula One race car in the Grand Prix Championship series.
Photo courtesy of Virent
by RON STARNER
W

hen Gov. Scott Walker stared down the powerful public employee unions in Wisconsin two years ago, the landmark budget reform legislation did more than place the Badger State on a path to fiscal recovery. It signaled a new era in governance and emboldened private industry to unleash capital.

The results are in, and a new wave of corporate facility investment is swamping over virtually every corner of Wisconsin.

From the Kohl’s Corporation’s $250-million, 3,000-job investment into an expanded corporate headquarters in Milwaukee to Gulfstream Aerospace’s 100-employee expansion in Appleton, Wisconsin businesses are growing faster than Aaron Rodgers racks up touchdowns at Lambeau Field.

“The tone was set by the governor that we want to grow the economy of Wisconsin,” says Reed Hall, CEO of the Wisconsin Economic Development Corp. “When the governor came into office in 2010, the economy here was not good. We have been very pleased with the big wins that we have experienced since then.”

Gov. Walker tells Site Selection that collective bargaining reforms and a complete overhaul of the state’s tax policy were the catalysts to this 90-point rebound.

“Our collective bargaining reforms have been incredibly important,” Walker says. “They helped us balance our budget. We went from a $3.6-billion deficit when I first took office to over a half-billion-dollar surplus this year. Any employer big or small looks to see if a community is stable, and our state is now stable for years to come. We have a stable bond rating, and we are now the only fully funded pension system in the country.”

"We need to continue to improve our business climate. That makes it easier to create jobs and opportunities in this state. Putting more power in the hands of the government only makes it harder for businesses to prosper."
— Gov. Scott Walker

Businesses responded when Wisconsin finally gave them a much-needed break, the governor adds. “We passed $1.5 billion in tax relief over the last two years,” he says. “We reduced the number of tax brackets. We have a production tax credit that we fully funded this year. By 2016, we will have a 7.5-percent credit for agriculture and manufacturing. That effectively removes the tax burden for those two sectors. If they can all but wipe out their taxable liability, that is money they can invest back into their companies.”

On top of those reforms, the governor notes that Wisconsin “just approved $25 million more for our venture capital fund. We are putting more money back into the economy. Coupled with that move, investments from private equity firms moved us up to the number 14 state in venture capital.”

And he’s not done yet. Walker tells Site Selection that he plans to push regulatory reform in the upcoming fall legislative session in Wisconsin. “We will hone in on workers compensation reform,” he notes. “It is one thing to put incentives out. What companies really want is an understanding that the business climate will be good for them. They want and need a reasonable regulatory environment.”

RTW Off Agenda For Now

One day, that may also include right-to-work legislation in Wisconsin, but the governor says that won’t happen in 2013.

“When I was in the Legislature, I was a supporter of right-to-work,” he says. “My opinion has not changed. But I don’t believe that we should push right-to-work this legislative session. In the year since my successful win in the recall vote — June 5 of 2012 — things have calmed down. The protestors have moved on to other states. I have heard from many employers that they just want things to calm down a bit. That doesn’t mean it will never happen in Wisconsin. It just means it won’t happen this year.” 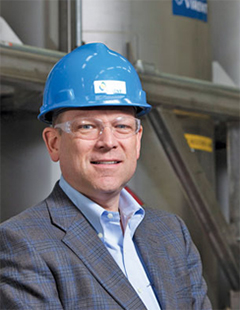 Still, there’s much more work to be done, he adds. “While our property taxes have gone down each of the past two years, I am going to continue to lower the overall tax burden here in Wisconsin,” he says. “We need to continue to drive that down. Minnesota just passed a $2-billion tax increase. We are going to continue every year to dramatically lower the tax burden for businesses in our state. We will also focus on work-force development and regulatory reform.”

The hard work has already paid off. The governor’s reforms have catapulted Wisconsin from 43rd in Chief Executive Magazine’s annual ranking of best states four years ago to 17th this year.

More importantly, businesses are voting with their pocketbooks, as more of them choose to invest capital in the Badger State and expand their work forces.

HUSCO International, an engine parts supplier in Waukesha, announced June 7 that it will expand its operations by $45 million and 150 jobs over the next two years.

Austin Ramirez, president and CEO of HUSCO, said that “a significant portion of HUSCO’s revenue growth will take place with Ford Motor Company, who today is recognizing HUSCO’s Waukesha facility with their top honor for a production supplier — the prestigious Q1 certification.”

Just five days later, Walgreen Co. announced an expansion of 115 jobs at its distribution center in DeForest. The move includes a multi-million-dollar upgrade of equipment and facility improvements.

Virent Inc., a rapidly growing bio-fuels company in Madison, announced July 1 that it had received a federal award of up to $4 million to develop carbon conversion efficiency of biomass to distillate products ideal for blending into existing diesel and jet-fuel infrastructures. The firm, which employs some 120 workers in the state capital, makes a bio-gasoline that is used in the Formula One Grand Prix Championship auto-racing circuit.

Meanwhile, one of Wisconsin’s largest private employers — Epic Systems Corp. — is expanding yet again in Verona. A dominant force in the electronic medical records industry, Epic plans to hire 1,000 new workers this year and bring its total employment to 6,000 by Dec. 31. One year ago, the firm employed 4,200 people.

Epic currently is building its third set of office buildings — called the Farm Campus — in Verona. The total value of the ongoing construction projects on Epic’s 811-acre campus is estimated at $350 million to $400 million, according to published reports.

Another software company, Skyward, is building a new headquarters in the Portage County Business Park in the town of Stevens Point. The $30-million project will be set on 43 acres and allow the educational software firm to grow from its current 388 employees to 671 within five years.

“People feel more comfortable adding staff in Wisconsin these days,” says Hall. “The governor is committed to reducing taxes every year he is in office. In our office at WEDC, we have been given new tax credits to give to entrepreneurs starting new businesses and hiring new employees in Wisconsin. That will be in our arsenal.

“We are also expanding our international work,” he adds. “We want to increase FDI in Wisconsin. Last year, we did $23.1 billion in exports. We believe that our exports will be at least $32 billion in a couple of years.”

Paul Jadin, president of the Madison Region Economic Partnership, says that the state capital area is at the forefront of the statewide recovery.

“Our jobless rate is the second lowest in Wisconsin,” Jadin says. “The outlook for this region is very positive. Our capacity to start new businesses is very bright. Venture capital and angel investors are here. The private sector is stepping up in ways it has not before. A group out of Milwaukee stepped up July 10 and announced another $66 million in venture capital.”

Welcome to The New North

Jerry Murphy, executive director of The New North Inc., a 7-year-old regional partnership in northeastern Wisconsin anchored by Green Bay, says that Wisconsin is thriving today because of its inherent strength in industrial manufacturing.

“If there is anything in this country that is going to be built, it is going to be built here,” Murphy says. “You don’t roll paper machines off the assembly line. The Schreiber Corp., a food-processing company of cheeses and packaging, is consolidating all of its operations in downtown Green Bay. Mercury Marine is another great story of expansion; and Acuity Insurance is just on fire and is growing by leaps and bounds.”

Humana Corp. is adding 75 jobs in the region, while Green Bay Packaging completed a $95-million expansion last year, Murphy notes. “Alta Resources is up to 1,200 folks at its call center operation and is adding another 500 jobs this year.”

BelGioioso Cheese added an entire plant in Green Bay last year while Sargento grew in the Plymouth area, says Murphy. “It is not explosive growth, but it is nice and steady,” he adds.

Murphy says he began to see business expansion take off in Wisconsin once the state corporate tax reduction began to take effect. “The phase-in of this tax reduction takes the corporate tax from 7.9 percent to 0.4 percent by the end of 2015,” he says. “That is a monster change in the tax structure, particularly for manufacturing. That is a great lure to bring additional manufacturing to the state.”