Georgia Holds On To First Place

The right foundation for new capital investment includes a workforce with the skills in demand by industry and making state government as non-intrusive as possible, says Governor Nathan Deal. 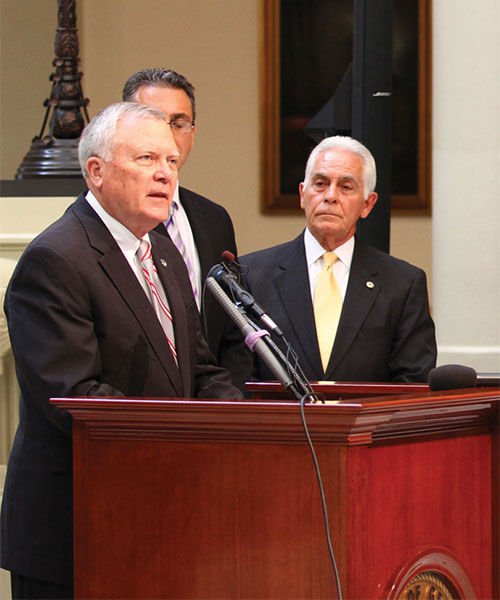 eorgia's first-place finish in Site Selection's ranking of state business climates for 2014 underscores the fact that its first-place finish in 2013 was no anomaly. The Peach State had been a strong performer in this contest for several years, rising in the ranking steadily thanks to its Quick Start workforce training program, logistics infrastructure and economic development leadership, among other factors.

In May, by a second methodology based largely on actual new plants and expansions announced the previous year, Georgia claimed Site Selection's Top Competitive State recognition. Business news broadcaster CNBC named Georgia the best state for business a few weeks later, without benefit of Site Selection's New Plant Database nor its survey of corporate site selectors, which accounts for half the Top Business Climate ranking. And other measures put Georgia at or near the top of similar rankings.

"Georgia is good for business" is the only logical conclusion to draw from a two-year, first-place finish in this contest. And more site selectors agree, if the executive survey component of the ranking (50 percent) is any indication. Asked to rank the states according to the best business climate in their experience, respondents ranked Georgia second this year, after Texas, up from fourth place in 2013. 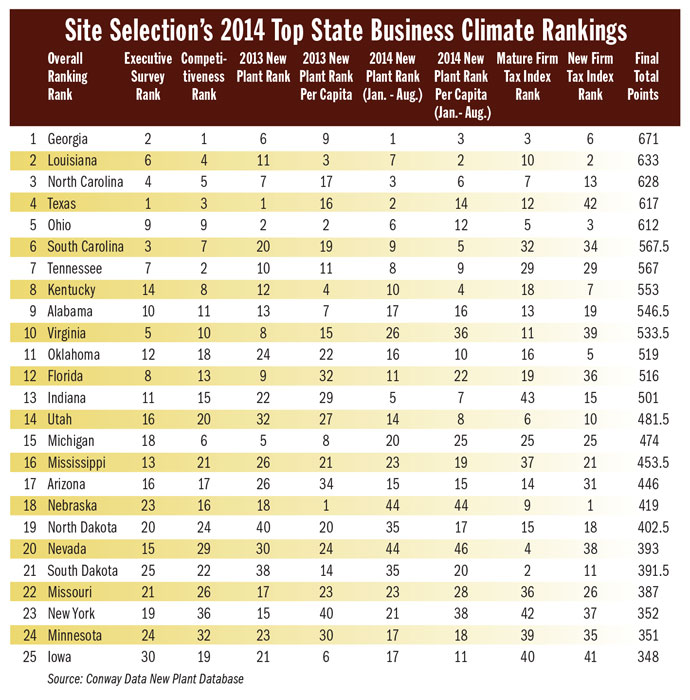 Louisiana jumps from sixth place last year to second in 2014 in the overall ranking, surpassing North Carolina (third place) and Texas (fourth) - the two states that have battled for first place in the Top Business Climate ranking for much of the past decade. The entire Southeast remains the region to beat, with nine of the top 10 states calling the region home (see chart). Fifth-place Ohio retains a spot in the Top 10, dropping from fourth place in 2013.

Site Selection's rankings of economic development success are heavily project-based - it's been logging qualifying projects (minimum $1 million capex, 20 or more new jobs or 20,000 sq. ft. or more of new space) into the magazine's proprietary New Plant Database for decades. But it takes a competitive business climate for those projects to land in locations that rank in the winning states and metros.

What Makes a Business Climate Competitive?

"It's laying the foundation that makes businesses want to come to your state and want to grow in your state," said Georgia Gov. Nathan Deal in an October 23rd interview with Site Selection. "One factor is the workforce, and we continue to be rated at the very top in that regard. Our Quick Start training program is still the leading program for any state in terms of training workers for a business coming to our state or for a business that's already here. We'll train the workers at no charge to them so that when they have the expansion ready to go, they'll have a workforce that's ready to go as well. Our university system has about 50,000 graduates every year, and we have a large network of public colleges and universities throughout the state in addition to the private universities."

Asama Coldwater Manufacturing, Inc. ( ACM), a leader in high-quality brake component manufacturing for the automotive industry, announced in September an expansion in Warrenton, creating 40 jobs at a new machining and painting facility. The new 80,000-sq.-ft. (7,400-sq.-m.) facility will be located adjacent to the 203,000-sq.-ft. (18,860-sq.-m.) foundry currently operated by ACM. The newly created jobs will specialize in robotics, CNC machining and precision inspection as well as other manufacturing and machinery operations. ACM will use Georgia Quick Start to train its new employees.

In southern Georgia, Coyote MFG Inc. is using Quick Start in Nashville, Berrien County, to staff 100 jobs over the next two years as it builds a 109,000-sq.-ft. (10,130-sq.-m.) facility for producing steel and aluminum boat trailers, arches, leaning posts and T-tops.

"There is a vast abundance of available workforce in the area, and we have had an overwhelming response from qualified applicants," said David Money, co-founder, Coyote MFG Co., at the project announcement in May. "We look forward to growing Coyote Manufacturing in this great community."

Gov. Deal says about 1 million Georgians have been trained since the Quick Start program came into being more than 40 years ago, and that it has long been a central part of the state's pitch to businesses considering a Peach State site for new operations. 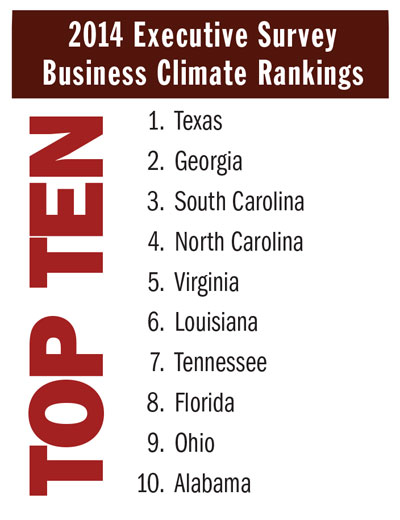 Georgia ranks 35th in the Tax Foundation's most recent ranking of state and local tax burden as a percentage of state income (8.8 percent), meaning only 14 states impose a lighter tax burden than Georgia. Its corporate tax rate of 6 percent is competitive in the Southeast, though two neighboring states, South Carolina and Florida, have lower rates - 5 percent and 5.5 percent respectively.

"We decided early on in my administration to listen to businesses and to ask them what it would take for them to grow jobs in Georgia," says the governor. "We believe we can be a manufacturing state again. We were told that if we would reduce or eliminate the sales tax on energy used for manufacturing we would see the manufacturing sector grow. We did that, and it has paid huge dividends. That applies to new businesses and to existing businesses."

This year has seen several manufacturing projects with job-creation figures well into the hundreds, including:

Keurig Green Mountain, Inc. will open a new, 585,000-sq.-ft. (54,350-sq.-m.) manufacturing facility in Douglas County, creating approximately 550 new jobs and investing $337 million over the next five years. In February, Keurig and Coca-Cola announced the companies had entered into a long-term, global strategic partnership to collaborate on the development and introduction of Coca-Cola's global brand portfolio for use in the Keurig Cold™ beverage system. 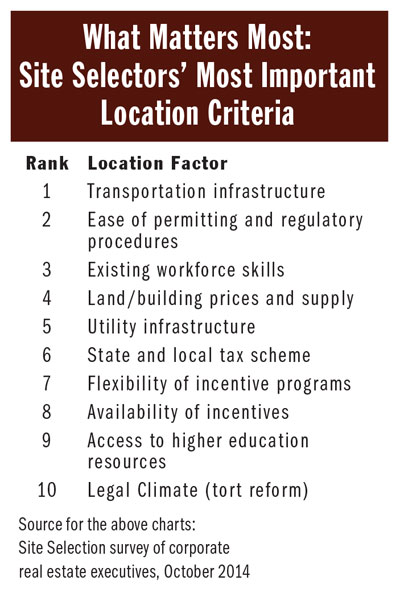 Valmiera Glass, based in Latvia, will locate to Dublin, creating 150 jobs and investing $20 million in five years into its first US-based headquarters and manufacturing facility. The approximately 80,000-sq.-ft. (7,400-sq.-m.) facility will manufacture fiberglass products for the North American market.

Belgium-based floor coverings maker Beaulieu International Group ( B.I.G.) will establish its US headquarters and create 350 jobs in Cartersville over the next five years. The plant will be constructed on 120 acres of land (48 hectares) previously owned by Anheuser-Busch InBev.

Non-manufacturing job generators are also drawn to Georgia's business climate with major announcements in 2014, including:

Georgia-based lighting solutions provider Acuity Brands will expand its operations, creating 700 jobs and investing more than $16 million into DeKalb and Rockdale counties over the next five years.

Walmart Stores, Inc., will locate to a new distribution facility in Union City, creating more than 400 jobs and investing $108 million into the project over the next three years. The 1,200,000-sq.-ft. (111,480-sq.-m.) state-of-the-art warehouse facility will support Walmart's fast growing e-commerce business.

" The role of government is not to hire more people and put them on government payroll. It's to encourage the private-sector community to create those jobs."

Chime Solutions Inc. will create more than 1,120 jobs at a call center operation in Morrow. The minority- and woman-owned business will locate to the former JCPenney building at the Southlake Mall in Morrow. The 65,000-sq.-ft. (6,038-sq.-m.) facility will become a state-of-the-art call center. Open positions include executive, administrative, supervisory and customer service. 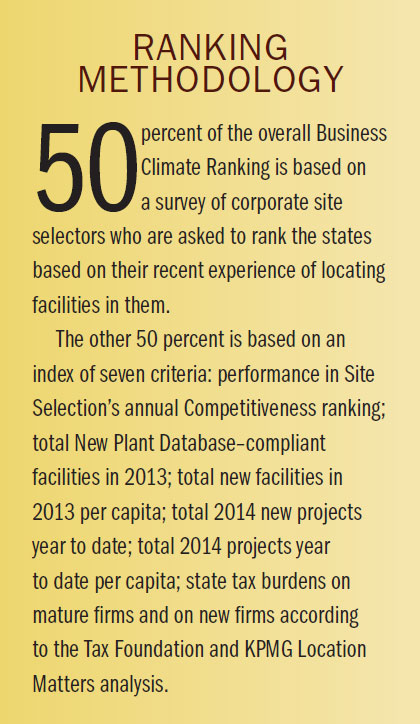 "The role of government is not to hire more people and put them on government payroll," says Gov. Deal. "It's to encourage the private-sector community to create those jobs, and government has a role to play by simply making sure the foundation and the environment are as conducive to that as possible."

One focus of the governor's office this year has been to work more closely with higher education to ensure that degree programs result in employability.

"We are asking our colleges and technical schools to look at their degree programs and the placement rates of the graduates receiving those degrees," the governor relates. "If they have a disproportionate number of their graduates in a particular area that are having trouble finding jobs, then shift the resources, the money being spent, to those areas where jobs will be available. That's easier to do in our technical college system, but it's happening in the college and university environment, too."

The governor's High Demand Career Initiative identifies those areas where jobs are available that could be filled by Georgians. Working with the General Assembly, the Initiative has identified seven areas where, with the proper technical training, jobs are waiting to be filled. Better yet, the state will cover the cost of that training via the Hope Grant. These include commercial driver's license training, welding, diesel mechanics, health technology, information technology, early childhood education and practical nursing.

"I've identified four more where we have the jobs and the need for additional training - precision manufacturing, assistant engineers who work on the machines in manufacturing facilities and keep them running, film production and teaching the language of computer programming in our high schools as credit courses and to have our colleges and universities accept those credits, perhaps as a substitute for a foreign language," says Gov. Deal. "The state Board of Education took up this notion at a meeting I attended just this week. We think they will approve it. And we're working with our Board of Regents to make sure the universities will accept those credits. We have every indication they will. Ordinary businesses need someone on staff with computer programming skills to bring those businesses up to date internally."

Students' ability to acquire those skills through Georgia's technical schools - tuition free - goes a long way to making available the workforce required by today's capital investors. "It's common sense," says the governor. "If you've got jobs out there, and you don't have people trained to do them, then start with that, and that's what we're doing."