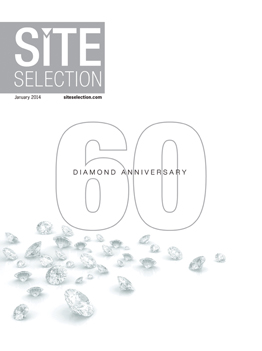 FEATURES
2013 Site Selectors’ Survey
Tailor Made
Incentives make the headlines, but data drives decisions.
State of the States
The Lay of the Land
Site Selection is proud to publish our fifth annual State of the States report in this, our 60th anniversary issue.
Oil, Gas & Coal
Should It Stay or Should It Go?
Two US manufacturing organizations offer opposing views on the export of LNG.
Super Sites
Qualified Leads
2014 marks the 10th anniversary of the granddaddy of them all when it comes to large site certification for industrial development.
Creative & Digital Media
Let It Be
Want to keep your city weird enough to sustain the mash-up generation? Let them figure it out.
Customer Contact Centers
The Future Is Flexible
Customer contact centers are gravitating to locations that can supply workers with a broader range of communication skills, especially social media.
FDI Forum
Shanghai Welcomes The WORLD FORUM for Foreign Direct Investment
China’s gleaming commercial center welcomed delegates from nearly 30 countries in November to The WORLD FORUM for Foreign Direct Investment.
Logistics Hubs
Cities of Commerce
It’s the 20th anniversary of NAFTA. Do you know where your goods are?