From the executive office to the plant floor, Pennsylvania keeps employers
stocked with research, skilled workers and intellectual property.

hen Apple iPhone manufacturer Foxconn announced recently that it would invest $30 million in a new robotics plant in Harrisburg, Pa., the industrial site selection called into question whether cheap labor and tax breaks are still paramount in corporate location decision-making.

Foxconn, an international conglomerate well known for its extensive operations in China, seemed to counter its own global growth strategy by choosing a Northeast U.S. location based largely on other factors.

In this case, the company elevated factors such as access to the resources of Pennsylvania’s colleges and universities; the presence of highly skilled, well-trained, technical workers; and a rapidly growing cluster of advanced manufacturing firms concentrated in the region.

“With our skilled workforce and world-class educational institutions, companies from all over the world are looking to tap into Pennsylvania’s innovation and talent,” said Pennsylvania Governor Tom Corbett.

Call it “hired education” — where practical, applied research flowing from Pennsylvania’s prestigious colleges and universities is converging with a STEM knowledge base that electronics makers and other advanced manufacturers covet.

A recent Brookings Institution report — “Rethinking Metropolitan America” — authored by Mark Muro and Scott Andres, looked at the Foxconn case and concluded that “Foxconn is beginning to realize what a number of global manufacturers have come to realize: Production sites that can leverage university, government and private R&D, a market-ready STEM work force, and a vibrant cluster of global manufacturing supply chains trump cheap labor and tax breaks.”

Throughout the Keystone State, hubs of advanced manufacturing are springing up around colleges and universities that support economic development. From the Greater Philadelphia Area to the Western Pennsylvania Region anchored by Pittsburgh, institutions of higher education are quickly becoming the No. 1 driver of economic growth.

“Pittsburgh — with the University of Pittsburgh, Carnegie Mellon University and firms like Google — has redefined itself from a gilded-era steel town to a modern technology leader in software and robotics,” the Brookings report states. “Indeed, Foxconn is investing $10 million in Carnegie Mellon’s world-class advanced robotics R&D.”

Marc Malandro, assistant vice chancellor for technology management and commercialization and director of the Office of Technology Management at the University of Pittsburgh, tells Site Selection that Pitt ranks No. 5 in the nation in total research support from the National Institutes of Health.

“Most of our research is on the life and health sciences side,” he says. “A critical mass of technologies in the medical device space is here. In fact, our research and the research at nearby Carnegie Mellon University in Pittsburgh are complimentary in this area.”

Malandro cites several scientific breakthroughs that have been discovered by Pitt researchers. Among them are an artificial lung technology that removes carbon dioxide from human lungs, a biomedical adhesive that is currently selling in Europe and is completing U.S. clinical trials, and a contrast agent called Vizamyl that is used to treat Alzheimer’s patients. 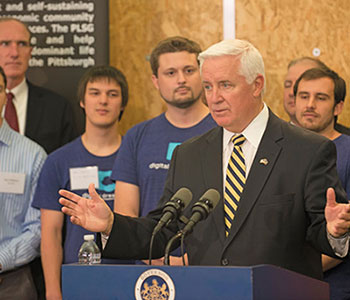 “I have visited Google in Pittsburgh, who opened an office due to the great quality of life and resources in the area,” said Pennsylvania Governor Tom Corbett. “They are helping to build this region as a high-tech corridor and are proud to be hiring local engineering talent from the excellent colleges in the area.”

“We support companies in the state through our facilities, our areas of expertise, and our contractual support,” Frecko says. “We have a $230-million building that opened in 2011 and is an open-use facility. Companies can come in and use our electron microscopes. We can actually resolve atoms. Penn State was the first place where an atom was viewed — in 1959. The professor who achieved this breakthrough won the Nobel Prize. The Materials Research Institute is also a multi-disciplinary research institute; five colleges and 15 departments are represented here. So companies can benefit from a variety of skilled expertise at Penn State. And finally, we can help companies looking for new product innovation and new product applications through our contractual support. We decided to simplify the process and make it easier for people to come in and work on research collaboratively with PSU.”

From AccuWeather to Ascent

Ascent Bio-Nano Technologies Inc. is a biotech start-up based in State College near PSU. Located in the Technology Center Building, an incubator at Innovation Park, Ascent develops medical instruments based on patented biomedical nano-electro-mechanical systems developed by researchers at PSU.

“They use ultrasound waves to sort blood cells,” says Frecko. “This is often done with centrifuges, but here this device can sort out different cells based on size and weight on a nano-chip scale.”

Dr. Ronald Huss, associate vice president for research and technology transfer and director of technology management at Penn State, notes that PSU received $848 million in funding for research last year, making the school one of the top research institutions in the nation.

“Our research work is very broad in scope, covering agricultural science, medicine, material science engineering, and other sectors,” says Huss. “Our office works with our researchers to identify discoveries and new technologies that have potential commercial value.”

Notable spinoffs from PSU include AccuWeather, founded in 1962 by Joel Myers, who was then a Penn State graduate student working on degrees in meteorology, and Anacor Pharmaceuticals Inc., a bio-pharmaceutical company that produces small-molecule therapeutics derived from boron chemistry.

Dan Leri, director of Innovation Park at PSU, says Penn State consistently ranks in the top 12 in the country in federal R&D funding. The Ben Franklin TechCelerator at State College uses a “risk-reduction methodology to help match talent and technology in the region,” says Leri. “This is based at Innovation Park. We offer incubator space for startups. In total, we have about 50,000 square feet of incubator space, out of a total of 1 million square feet in Innovation Park. About 12 new startups per year are going through the TechCelerator program. We help develop our own entrepreneurs.”

Tony Sorrentino, executive director of the University of Pennsylvania’s Office of the Executive Vice President in Philadelphia, says that “we define economic development very broadly at Penn. One aspect is the research commercialization area, but we also focus on helping our small local businesses grow.”