Toledo’s international infrastructure serves
rising exports and inward FDI all at once. 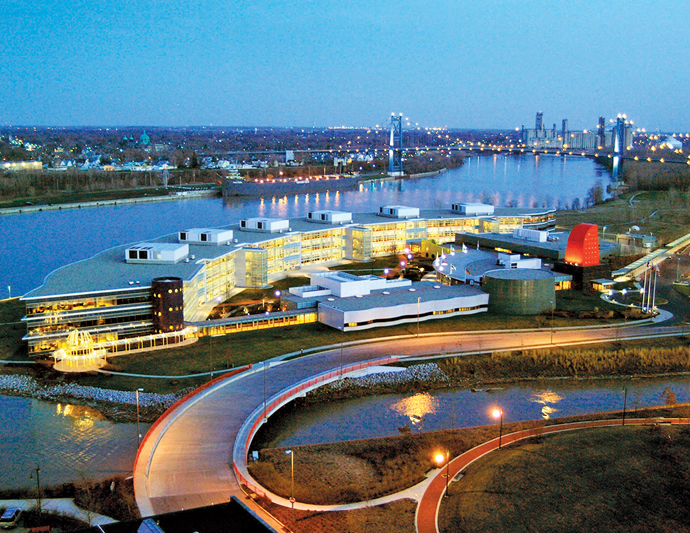 Owens Corning, whose Cesar Pelli-designed world headquarters in downtown Toledo is shown here, celebrated its 75th anniversary in 2013. With sales of $5.2 billion in 2012, the company employs about 15,000 people in 27 countries on five continents.
Photo courtesy of Owens Corning
by ADAM BRUNS
T

oledo is a city that prides itself on its global ethnic and cultural diversity, and the entrepreneurial and industrial links that accompany that heritage.

The city’s most famous product — the Jeep — vies for leading status as an export with actor Jamie Farr, the Toledo-born son of a Lebanese immigrant grocer from a mixed ethnic neighborhood. Farr played the Toledo-loving, cross-dressing Corporal Klinger in the television show “M*A*S*H” — a show which featured more than its share of Jeeps made in Toledo.

Toledo’s exports rose 12 percent to a record $2.7 billion in 2012, led by a 44-percent jump to $573 million from the transportation equipment sector.

Rising in parallel is Northwest Ohio’s worldwide profile, or what Paul Zito, vice president, international development for the Regional Growth Partnership, calls the area’s international infrastructure, uniquely poised to serve the approximately 150 foreign-owned firms with a presence in the region.

“Whether homegrown startup or overseas corporation, a company can find world-class service providers that have experience working with overseas companies,” says Zito, a 25-year global business veteran. “I’ve worked with lots of regions in the US and the world, and you don’t find that same kind of international infrastructure in other Midwest mid-sized cities.”

Look through the ethnic culture collections at the University of Toledo and you’ll discover the roots of the Hungarian community on the East Side, whose original 200 families came from Cleveland in 1892 because the National Malleable Castings Co. said so. The city’s German cultural institutions go back to the 1800s. And the Chinese, even as they were being shunned across much of the country because of the Exclusion Act of 1882, were actually increasing in number in Toledo.

Their presence is increasing again, in more ways than one. The area’s Asian population grew by more than 25 percent between 2000 and 2010. And judging from investor interest abroad, the Chinese connection is one of several global ties that continue to strengthen Toledo’s global profile.

“We have hosted dozens of delegations of Asian investors, and they’ve invested very heavily in Northwest Ohio,” says Scott Prephan, the Toledo-born president of Five Lakes Global Realty, whose parent firm began working with Chinese investors about four years ago. The investments include two hotels, and the sale of a prime marina district site that will be home to a mixed-use development.

Five Lakes has also helped things go the other direction, facilitating over two dozen trips to China involving more than 100 government and business officials from the region. Prephan is used to the two-way street phenomenon.

“I’ve been going to China for nine years, and we went originally to look at development opportunities in China. We did that for four or five years, and we ran into a lot of individuals interested in coming over here. So the business model changed around a little bit.”

There’s another aspect to that two-way street: China as an export market. Germany’s MITEC Powertrain in Findlay, for instance, is now shipping to China some of the same engine products used in the North American market.

The above figures for Toledo are drawn from a recent Brookings Institution report highlighting the international trade connectivity of the largest 100 US metro areas. Among those cities, Toledo had the highest per-capita trade volume with NAFTA partners Canada and Mexico.

Paul Zito continues to take part in regional and state delegations to such events as the Hannover Fair in Germany (Germany’s Kuka Automotive created 100 new jobs in Toledo in 2013). He says there’s also particularly strong interest from Japanese companies at this time. Northwest Ohio is home to operations from 30 Japanese companies employing 7,500 people. They include Bridgestone’s two Northwest Ohio facilities in Upper Sandusky and Findlay, and Topre’s new engineering office in Maumee.

“The international infrastructure in Toledo clinched the deal,” says Zito of Topre, which has some 800 employees in Alabama. “They wanted to be closer to Detroit and to the Honda plant in Marysville [Ohio], and they found that the Toledo region has a great pool of lawyers and accounting firms with international expertise.”

The visibility of the Chinese activity in Toledo now has caught the eye of the Italian business world.

“At least 15 Italian companies have engaged us to help them with site selection and various business opportunities, including some in Northeast Ohio as well,” says Prephan.

A new tool that may soon assist foreign investors is a broad-based Ohio “Regional Center” for the federal EB-5 program, which allows qualified foreign investors to become eligible for an employment-based visa.

The proposed regional center will be named MidAmerican Global Ventures. Officials hope to receive final federal approval by the end of 2014. The project involves eight economic development organizations across the state (including the Toledo-Lucas County Port Authority) and one university partner: the University of Toledo. It will be administered by Columbus-based MidAmerican Global Ventures, which will offer financing for mixed-use real estate, medical offices, technology, energy, manufacturing, and distribution/logistics facilities. 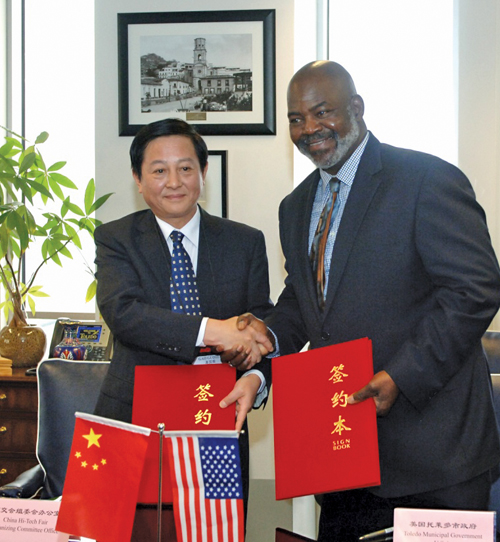 Gao Guohui, deputy secretary general of the Shenzhen Municipal Government, was part of a delegation from the China Hi-Tech Fair that visited Toledo in August 2013, and signed a cooperation memo with Toledo Mayor Mike Bell.
Photo courtesy of CHTF

“EB-5 offers significant financing on very competitive terms for Ohioans looking to develop and grow their business,” said Brian K. Hicks, MidAmerican’s managing director, in November 2013. “Moreover, this program can help open new doors as Ohio continues to grow in the international community.” Hicks says most of the interest and money has been coming from China, but interest is growing from other countries, including Vietnam, South Korea, Brazil, the Middle East and Eastern Europe.

Denmark-based Hamlet Protein, which employs 23 full-time employees at an operation that launched in Findlay in 2011, knows how to take full advantage of Northwest Ohio’s physical and human resources assets to both make and ship its animal nutrition products. Plant manager Bruce Rogge says a major site selection factor was nearby abundance of soybeans and the facilities to process them. Now the logistics infrastructure is coming to the fore.

The plant was designed to serve Canada, the US and Mexico, says Rogge, but now it’s started to serve some of the markets previously served by its sister plant in Denmark, including Thailand, Taiwan and Vietnam.

“We’ve been able to pick up some business in some of those markets,” he says. “Transportation is an advantage to us here.”

Asked how the Danish parent company’s executives view their new Findlay operation, Rogge says the work ethic of Northwest Ohio is front and center. (That’s no surprise, given that Denmark’s work week is among the shortest in the world, and workers there are guaranteed six weeks of vacation a year.) The Findlay team works rotating 12-hour shifts and averages 42 hours a week, with two weeks’ vacation. Then add in the intangibles that Rogge says Hamlet executives appreciate: “the work ethic, attitude and stability.”

It’s a math equation that needs no translation.