It’s the 20th anniversary of NAFTA. Do you know where your goods are? 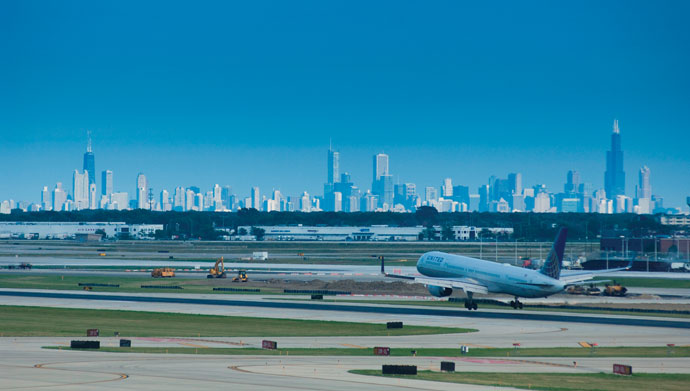 O’Hare International Airport recently welcomed a new $35-million hub from DHL, and broke ground on a new 820,000-sq.-ft. (76,178-sq.-m.) Northeast Cargo Center that is expected to generate thousands of jobs when complete. The airport, which commissioned another new runway in Oct. 2013, is a key asset in Chicago’s elevated status as a logistics hub.
Photo courtesy of Chicago Dept. of Aviation
by ADAM BRUNS
J

oseph Parilla and Alan Berube at The Brookings Institution’s Metropolitan Policy Program recently marked the anniversary with the debut of their “New North American Trade Map” concept and their report “Metro North America: Cities and Metros as Hubs of Advanced Industries and Integrated Goods Trade.”

Among the report highlights, more than three-quarters of advanced-industries trade with Mexican and Canadian metro areas originates or terminates in non-border U.S. metro areas.

After a dip due to the Great Recession, NAFTA trade flow is coursing along. According to the US Bureau of Transportation Statistics’ TransBorder Freight Data resource, year-to-date US-NAFTA freight movement was up by 2.1 percent in value through Sept. 2013, to nearly $850 billion.

In a Nov. 2013 blog, Parilla and Berube note how much the world economy has changed in those 20 years. But trade then and trade now defines the relationships among the three NAFTA neighbors. By arrangement with Brookings, here we excerpt that blog:

In both quantity and quality, trade on the continent is distinct. The United States trades as much with Canada and Mexico as it does with Japan, Korea, and the BRICS — Brazil, Russia, India, China, and South Africa — combined. More than that, North American production and trade is no longer characterized by the exchange of finished products alone, but also by the co-production of advanced goods across the continent — in sectors such as aerospace, automotive, and electronics — linked tightly through value chains. As evidence of that, at least 25 percent of what we import from Mexico and Canada is actually American-made content; for China, that share is just 4 percent.

Until now, though, we have known very little about where that trade actually takes place. Our new Metro North America report and interactive aim to fill that gap by diving below the national level to locate the advanced industries and trade routes most critical to North American competitiveness. It finds that they are rooted in a network of metropolitan economies that stretch well beyond the border, trading and co-producing with one another as they anchor an increasingly integrated North American economy.

Firms — the primary architects of this phenomenon — now locate different stages of production in each country to maximize cost-efficiency and product quality. Regardless of which country they choose, advanced manufacturers require the interplay of skilled workers, innovation, and dense clusters of suppliers that metro areas uniquely combine.

Since Jan. 2012, Site Selection has tracked 46 facility investments by Amazon around the world, including three each in Texas and California, as well as new fulfillment centers in Poland, the Slovak Republic and India. On Oct. 1, the company said it was creating more than 70,000 full-time seasonal jobs across its US fulfillment centers for the 2013 holiday season — a 40-percent rise over the year before.

National trade, therefore, is really just the sum of the trade that occurs among our metro areas. Across North America, 58 percent of the value for all goods trade between the U.S. and Canada and Mexico happens between a network of 432 metropolitan areas. For six critical advanced industries—aerospace, automotive, electronics, machinery, pharmaceuticals, and precision instruments — the metro share rises to 69 percent.

Undergirding this network are massive flows between the continent’s largest metropolitan areas. Twenty-five U.S.-Canada metro pairs, led by New York and Toronto, and 15 U.S.-Mexico metro pairs, led by Los Angeles and Mexico City, each traded more than $1 billion in goods in 2010. Clearly, trade goes well beyond the border; more than three-quarters of advanced-industries trade with Mexican and Canadian metro areas originates or terminates in non-border U.S. metro areas. Whether it’s Detroit and Toronto in automotive, San Jose and Mexico City in electronics, or Seattle and Montreal in aerospace, the specific assets that fuel industrial competitiveness reside in major metros that link and grow together.

By embracing each other as partners rather than competitors, the United States, Canada, and Mexico would recognize that nascent trends toward re-shoring and near shoring, and shifting labor, energy, and technology dynamics, are favorably positioning North America as a production platform for the world.

But this will take a change in course. Over the past two decades, the North American share of world exports has steadily declined. Federal efforts remain critical to reversing that decline, of course. The continent needs an infrastructure upgrade, a more streamlined regulatory and trade environment, and access to foreign markets through free and fair trade.

Yet bolstering North American competitiveness ultimately begins with the continent’s metropolitan economic engines. Political, corporate, and civic leaders in cities and metros must also act with new purpose, setting globally-oriented economic visions for their places, investing smartly in the service of those visions, and leveraging their distinct sets of continental trading partners to mutual benefit.

Air cargo revenues are expected to be $60 billion in both 2013 and 2014, according to a Dec. 12 forecast from the International Air Transport Association, which said the cargo sector’s flat trajectory is adversely affected by “on-shoring” of production and protectionism. However, the WTO’s Bali agreement, reached in December, is expected to be good news for the air cargo industry.
Photo courtesy of Chicago Dept. of Aviation

Logistics and transportation assets may play a more important role than ever before in helping national, regional, state and metro-area visions come true.

A dive into Site Selection’s New Plant Database, which tracks corporate facility investments, finds that 20 percent of the 11,250 projects tracked across the globe from January 2012 through November 2013 had a logistics component. Overseas activity has been most pronounced in China, the United Kingdom, Germany, Australia, Belgium and Poland, in that order. In Mexico, the Monterrey/Apodaca area leads the way. And a large number of Canadian projects over that time span (94) is led by locations such as Hamilton and London, Ont.; Calgary and Edmonton, Alta.; and Regina, Sask. 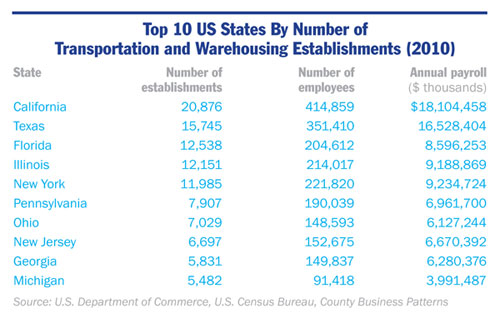 In a Nov. 2013 blog, the Brookings Institution’s Metropolitan Policy team highlighted the Top 10 metro areas for which trade with Canada and Mexico accounts for the largest share of total metro goods trade. The logistics assets required to keep that trade fluid are a key component of their continued prosperity:

The far and away leader, however, despite chronic complaints of highway tie-ups, airport delays and rail congestion, is Chicago-Naperville-Joliet, Ill.-Ind.-Wis., with 211 projects. And there are more on the way.

SINC will focus on public policy, innovation, talent attraction and collaboration. For example, the group will evaluate the potential replication of a successful program shifting truck deliveries to nighttime hours in New York City to limit traffic congestion.

“The Chicago region became an economic powerhouse because of our preeminence as a transportation hub. It’s time for us to recognize that we can’t lean on this history,” said Paul Fisher of CenterPoint Properties, who was elected board chair of SINC. “Whether we are left behind or successfully compete with other cities depends on a commitment to enhance our region’s ability to move goods efficiently, a central focus of companies when choosing a manufacturing or distribution location.”

Chicago’s transportation and logistics industry accounts for $14 billion in GRP, with a projected growth rate of 3.4 percent.

“This financial commitment represents our long-term strategy to expand our business in the greater Chicago area and Midwest,” said Rob Betzer, vice president, U.S. Central region for DHL Global Forwarding, of the company’s new facility. “As a part of a network of U.S. air freight gateways, this new facility will offer our customers more cost-efficient alternatives to shipping their cargo given our location on the airport’s premises in the third largest city in the U.S., that serves as a crossroads for trade and boasts the largest intermodal-container capacity in the Western Hemisphere.”