Maine is making economic progress through FDI and entrepreneurship. 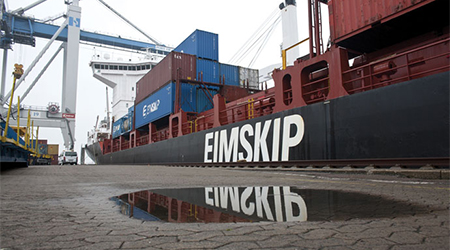 Eimskip moved its North American hub from Norfolk, Va., to the Port of Portland in March 2013.
Photo courtesy of Eimskip

irect investment by more than 100 foreign companies in his state has caught the attention of Maine Governor Paul LePage. They employ more than 30,000 workers, and many of these companies are expanding. The governor’s office even has its first-ever FDI budget now to support and to grow this activity, says Janine Bisaillon-Cary, president and state director of international trade with the Maine International Trade Center (MITC).

The funding, up to $140,000 in fiscal year 2014 depending on the private sector match, is administered through the Department of Economic and Community Development and goes toward hosting investment seminars in countries interested in investing in the state and investment consulting services identifying target industries and territories. Target industries include advanced materials, aerospace and renewable energy with an emphasis on biomass and bioenergy. The newest sectors the state is focusing on are life sciences and food processing. The target territories are northern Europe and the U.K.

“Now there’s more of a financial commitment on the part of the state,” says Bisaillon-Cary. “I think the governor saw the successes the first few years brought and he wanted to do more.”

Swedish medical products manufacturer Mölnlycke Health Care is expanding in Brunswick at the Topsham Commerce Park on the site of a former Naval Air Base. The site has more than 2,100 acres (850 hectares), a fully operational airport, a community college — vital for work-force education and training — and nearly 1.5 million sq. ft. (139,350 sq. m.) of commercial and industrial space. It also boasts a registered Foreign Trade Zone.

“Mölnlycke actually acquired a company, Rynel, several miles down the road, that made some of the products used in their wound dressings,” says Steve Levesque, project manager of the Midland Regional Redevelopment Authority, who is tasked with redeveloping Brunswick Landing and Topsham Commerce Park. “At the time, they were sending their products to Finland to be processed, then shipping about one-third of the product back to the US to be distributed. North America is their fastest growing market, so they wanted to have a North American processing facility for these dressings. The site director at Rynel had been known to us for some years, and when they were looking at sites they talked to us as well. We put together a package where we built the building and then leased it back to them.”

Mölnlycke took over the building in February 2013, moving in with 45 employees. Once all their equipment is in the building, they will more than double that number while adding about $37 million to the local economy.

At the ceremony officially inaugurating the facility, Mölnlycke’s CEO Pierre Guyot remarked, “Mölnlycke Health Care has a long-term commitment to the State of Maine, including plans for further investment in the vicinity of our two existing factories. As we build our presence in the region I hope to see the creation of a best-in-class R&D and innovation hub, where we can bring together our global expertise with the skills available locally.” 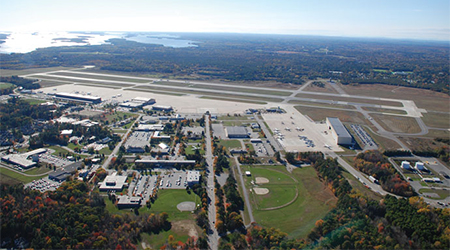 Swedish-owned Mölnlycke, a leading producer of single-use surgical and wound care products and services, has opened a manufacturing facility in the Free Trade Zone in Brunswick Landing, the name of the redeveloped Naval Air Station in Brunswick.
Photo courtesy of Midcoast Regional Redevelopment Authority (MRRA)

In February 2013, Eimskip (The Icelandic Steamship Company) signed a contract to begin operating out of the International Marine Terminal (IMT) in Portland rather than their former North American hub in Norfolk, Va. The move would save five travel days for ships bringing goods from mostly northern European ports.

Just weeks later an Eimskip cargo ship, the Reykjafoss, docked in Portland for the first time, bringing empty containers and other equipment from Norfolk. In September, Portland welcomed the first container ship from Europe since the 1980s.

“The Northeast market is huge for [Eimskip] with 55 million customers within a days’ drive,” says Bisaillon-Cary. “It doesn’t create many more jobs at the port — the biggest job creation will be the trickle-down effect through the rest of the distribution network, rail and trucking.”

Businesses in Maine are equally pleased to have a means to ship their goods, like timber, food products (blueberries, potatoes and lobster) and household goods to ports in the UK and Europe.

FDI isn’t the only economic driver. Entrepreneurs continue to create businesses and jobs. More than 133,000 Maine businesses are considered micro enterprises, businesses that have five or fewer employees. Micro-entrepreneurs — which are represented in every sector and located and every county in the state — create over 171,000 jobs, according to the U.S. Department of Commerce.

Incubators and innovation hubs can be found throughout the state with venture capital often flowing in from Boston-based groups and individuals. Thirteen Maine companies earned a spot on the 2013 Inc. Magazine list of the 5,000 fastest growing private companies.

“There was more to my site selection than just business economics — there was lifestyle, family and culture.”

One of those companies, Argo Marketing Corp., was founded in 2003 by Jason Levesque in his living room. A U.S. Army veteran, Levesque had a laptop, an idea and a head for marketing.

“Argo started as a direct response/telemarketing firm,” he says. “We managed call centers on behalf of marketers around the world and we did well.” But in 2008, he noticed the trend toward on-shoring. In response he started his own customer contact center division in Auburn, Maine. “I went from 10 people to 20, then 40 and 50,” he says. “We moved to a new site in Lewiston and went up to 100 employees.”

Since then, Argo has grown by leaps and bounds, often through acquisition of other contact centers that were going out of business. The company has divisions in Lewiston, Pittsfield and Portland. Argo’s most recent expansion took the form of a $2.5 million investment in purchasing, rehabbing and outfitting an old, 25,000-sq.-ft. (2,322-sq.-m.) McCrory’s department store in downtown Lewiston. It was more than a pure business decision.

“I love Maine. This is my home,” says Levesque. “Some people might say it’s not the most business friendly state out there but there was more to my site selection than just business economics — there was lifestyle, family and culture. I’d driven past that building a thousand times. I was thinking of expanding in Pittsfield, but one day over coffee with the mayor and some other folks, he suggested I go in the McCrory building. I looked it over and thought it might be the best and most practical use for that building — a contact center, some administrative offices and some retail to lease.” The expansion opened in late December 2013. It seats 350 agents and will accommodate between 500 and 600 employees by the end of 2014.