The new headquarters of Chaotic Moon, a mobile application development company in Austin, Texas, include a cantilevered conference room, a bike-rack wall, a shower for the bicyclists and a view of the 130-year-old W.B. Smith building across the street — where legendary Stevie Ray Vaughan, among others, once played at the Vulcan Gas Company psychedelic nightclub.
Photos courtesy of Sixthriver Architects

Want to keep your city weird enough to sustain the mash-up generation? Let them figure it out.

reative types don’t need tailor-made environments and amenities, just the freedom to build that ecosystem themselves. And they certainly don’t need or want to be corralled and observed like animals in a zoo to see what crazy, wacky things they might do next.

In other words: Drop the hip hype, can the self-indulgent logos and the branding, and let the genuine article shine through in all its un-trademarked and unplanned glory.

Even as it addresses some of the issues that keeping Austin “weird” has created — too much noise emanating from its wealth of music venues, for instance — Austin’s been better than most at preserving its authenticity without over-cultivating it.

Part of the picture is balance: For all the revealed-brick studio space in Austin-Round Rock there is also bedrock institutional employment by the state’s flagship university and state government. And there’s high-tech employment and innovation from such expanding and thriving companies as Samsung, IBM, Dell and that ultimate creative company, Apple, whose CEO Tim Cook revealed via Twitter in December that the product Flextronics Americas is assembling for Apple in Austin is the newest Mac Pro computer — considered by many creative types to be the ultimate driving machine starting at a cool $2,999 base price.

Such balance brings heft to Austin’s creative mystique, and the virtuous cycle continues to reap results. According to a February 2012 report from TXP, the creative sector in 2010 accounted “for just over $4.35 billion in economic activity (about one-third more than the revised baseline figure for 2005), over $71 million in City tax revenues, and almost 49,000 jobs. To put these results in context, the creative sector (as measured by employment) has risen by about 25 percent over the past five years, a pace more rapid than the 10-percent growth for the local economy as a whole.”

The report found that other states and cities have perhaps surpassed Texas with regard to generous incentives, especially in film and TV work. But all things considered, Austin’s coolness continues, with thriving growth recently in the gaming sector and in events-related tourism, especially from such multifaceted festivals as South By Southwest (SXSW). (Austin is the second-ranked major U.S. city in the number of community celebrations, festivals, fairs and parades per thousand population.)

The cross-fertilization that characterizes the SXSW scene is a clue to what the future holds, TXP concluded, as segments give way to synthesis.

“A theme throughout much of this effort is that these categorizations no longer really make sense, and that creativity is best viewed as an inter-connected whole, rather than in these traditional ‘silos,’ ” said the 2012 report.

Among the study’s observations about the gaming and digital media sector in particular were the following:

In sum, the new TXP report confirms an observation made in its original 2005 study: “The lines of demarcation between much of the creative economy are blurring, as music, film, and games are increasingly ‘mashed-up’ under the broad digital entertainment umbrella.”

Canada’s video game industry continues to hold its position as the third largest in the world behind the US and Japan, according to a study commissioned by the Entertainment Software Association of Canada.

Conducted by research firm Nordicity, the study found that Canada’s video game industry employed 16,500 people in 329 studios across the country in 2012, contributing $2.3 billion to GDP. The study also reported that one quarter of all video game companies in Canada planned to expand by as much as 25 percent in 2013. With 96 studios, Ontario has more than any other province, thanks in part to digital media tax credits offered by Ontario Media Development Corp., and federal tax credit programs.

Vancouver’s creative and digital media community proved a major connection with Chinese businesses in a series of meetings convened in Shanghai in November by the Vancouver Economic Commission. 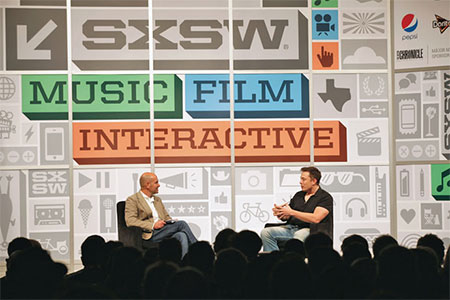 The South By Southwest festival in Austin represents one side of what one recent study called a new categorization of creative industries: content and “experience/performance.” The festival’s range runs from on-stage interviews with the likes of super-entrepreneur Elon Musk (above) to interactive gaming sessions to concerts by both new artists and legends such as Iggy Pop (age 66) and the Stooges.
Top photo by Sean Mathis courtesy of Getty Images; bottom photo by Peter Del Campo courtesy of SXSW 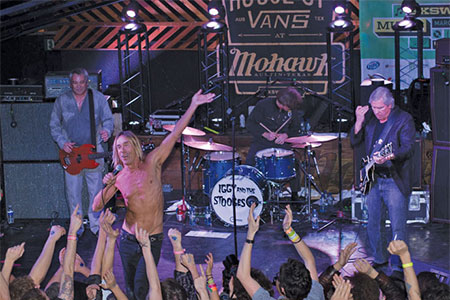 “The business was so good I lost my voice after eighteen back to back meetings,” said Barry Ward, president of Bardel Entertainment, in a Vancouver press release. “The quality of some of the animation studios I met with here was much higher than I expected. Co-production with Chinese companies means I can build my studios up in Vancouver and make products in China that are also going to be successful in the international market.”

In Montréal in September, Ankama Group, a European leader in multimedia authoring and production, announced the opening of its first North American studio, where it plans to create about 40 jobs over the next three years. Known for its online games DOFUS and WAKFU, the company relies on a transmedia strategy, developing narrative universes that unfold and complement one another over various media, such as video games, animated series, comics and mobile media.

“Here we have found the talent, creativity and innovation that define our group,” said Anthony Roux, the French firm’s co-founder and creative director. “Thanks to the pool of highly specialized workers in the Greater Montréal area, our new studio will be able to develop an entirely new generation of massively multiplayer online games [MMOG] in addition to adapting new graphics engines in the Ankama tradition, blurring the lines between video games and interactive cartoons.”

The Montréal region also boasts other world leaders in the video game industry, such as France’s Ubisoft, Eidos-Square Enix (Japan), and US firms Electronic Arts and Warner Bros.