Automotive manufacturers are leveraging Mexico for sales and cost competitiveness. 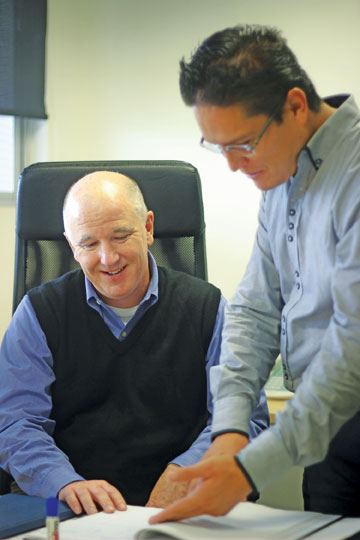 W hy is a Mexico manufacturing presence important to automotive suppliers hoping to reach markets beyond North America and Europe? Why is North American automotive production catching up to that of China? What is the current availability of incentives in Mexico for automotive industry players?

These are among the topics covered in a recent podcast hosted by the Entrada Group, a leading US-based provider of manufacturing support services in Mexico, primarily in the Zacatecas and Bajio region. Following are excerpts of that conversation between Entrada Group Vice President Doug Donahue (on the left in photo) and Luis Lozano Soto, Legal and Tax Service Partner, and the lead partner of the automotive industry group at PricewaterhouseCoopers Mexico. Mr. Soto recently authored a PwC report entitled “Doing Business in Mexico, Automotive Industry,” which looked at how the automotive industry globally — and particularly within Mexico — has changed in the wake of the economic crisis.

Doug Donahue: Your report says the automotive industry has been able to make a comeback from the 2009 crisis. But it had to make some severe adjustments in the way in which cars were produced and sold. Could you outline some of those adjustments?

Luis Lozano Soto: Yes. This industry went through very severe times, and because of that it had to apply certain adjustments. For example, companies learned that they cannot have production facilities to supply one market only. In the past, they had production facilities for the American market, one in Europe for the European market, one in Asia, etc. Now they know that they not only [have] to have one production capacity that will supply on a worldwide basis, but they also have to define unified platforms in which they will be able to produce several vehicles at the same time. [Those] were some of the adjustments that they did in the production capacity.

They also learned that they cannot compete in all the markets. They have to focus on being in the markets in which they have the best possibility to gain market share. Also, they reduced the portfolio of vehicles. We learned from the American companies that creating batches of the same model was not the best way to go to market. They were required by the government to cut the portfolio of vehicles they were producing in order to be more productive and efficient and, in the end, to have profits.

Technological advances also drove change. Manufacturers learned that large cars should be replaced by smaller vehicles because of specific issues, such as oil and gas prices. Consumers asked for smaller vehicles as well as other innovations such as hybrid vehicles, electric vehicles and other new types of technologies to reduce the consumption of gasoline. As a result, companies have had to change the way they do business, the markets in which they compete and the portfolio of vehicles they produce.

DD: In terms of whom they’re selling to and not just being dependent upon the US market, Entrada’s clients tend to be smaller, first-tier, second-tier or large third-tier suppliers, not the big OEMs. And they are looking to diversify, to expand their client base. This isn’t necessarily reflected in your study, but have you seen the automotive parts manufacturers in Mexico follow this diversification? Are they also producing in Mexico and shipping to other countries?

LLS: Yes. In fact, there are close to 200 auto parts companies established in Mexico. This is not only because the OEMs request local content, but also because production in Mexico represents cost reductions and efficiencies that allow them to produce for the local market and also for export. In 2000, the market for the export of auto parts in Mexico was about $5 billion. In 2012, it was around $19 billion. Annual growth in auto parts production in Mexico has been around 13 percent. And we have received a lot of investment not only from US and Canadian companies, but also from Asia and Europe. Those entities are looking for new markets. Growth in the emerging American markets is now quite good compared to the European market. A lot of Asian companies are establishing in Mexico in order to supply new business from Honda, Mazda, Toyota and Nissan — and to establish an export base. Production of auto parts in Mexico is a huge activity.

DD: It’s a very interesting point. We’ve seen with our clients that once they have the Mexican operation established, they’re being requested to quote projects in Brazil or Colombia or even Europe.

LLS: Yes. In the past, they were only producing exports for the US and European markets, but now they have gone to other places like Brazil, China, India, Africa, Argentina and Venezuela. The auto parts industry in Mexico is comparable now to the automotive industry not only in large vehicles but also in heavy trucks.

DD: Your report indicates that China remains the largest market, or producer, of cars. But the percentage is decreasing between China and North America. Is this just a statistical change or is there a larger reason why production in China is dropping?

LLS: There are several issues. There have been a lot of problems — increases in salaries, cost of transportation, logistics, and so forth. So in the end, China has become a market at risk. Most of the producers there intend to produce for the internal market. They produce and sell in China because of the huge market that they have and the wealth of the economy. In the meantime, the US has been recovering. In 2012 for example, growth [in the US market] was 13 percent. Sales went up 14.5 million units. They are trying to recover to the maximum sales of around 17 million. This year, they have also witnessed 8-percent growth, so that gives us — Mexico — a lot of opportunity. Production in Mexico has also increased. Local sales have increased around 9 percent. About 63 to 65 percent of our production goes to the States, and it is recovering, so production capacity in Mexico is recovering as well.

Ten percent of the cars that are being sold in the US, a mature market, are produced in Mexico. Mexico is an emerging market, but every time the US has growth in sales, it represents maybe half of the production total in Mexico. We have a lot of opportunities, not only because we are so close to the States, but also because of all of the investment that the government and companies have made to ensure that Mexico is a good place to invest.

DD: Companies evaluating Mexico always ask what incentives are available. My advice to them usually is, unless you’re a large OEM looking to establish a new operation, there isn’t anything really available at the federal level in terms of established incentive packages. At the state level there may be some incentives, but even those are now minimal in the automotive industry. Is this correct, or are incentives out there that new-to-market companies can take?

LLS: That’s a fair statement. Local governments try to compete with each other to gain investment. There are clusters in certain regions of the country where OEMs are investing, and auto parts companies invest nearby. The government has not only tried to attract automotive investment but also investment from other industries — aerospace, technology and food processing for example. The Mexican government is trying to diversify. The government has some incentives. Some of them promote investment in fixed assets, such as technological research centers, and they try to support employment in Mexico. Some incentive programs already in place, like the Maquila, are intended to increase employment in Mexico. On the tax side, the government has reduced the income tax rate and the flat tax for production facilities for export. The Mexican government is trying to handle federal industry programs, not only for the automotive industry, but also for other industries.

We have a lot of challenges. The Mexican government is now looking to attract investment for the energy industry. The results of that effort will have a huge impact in the economy. It would put us in a position in which the government would be able to invest in infrastructure, and by doing that, other industries, like the automotive industry, would benefit.

DD: Your report alludes to how important the Mexican automotive industry is to employment in Mexico. For those who are not familiar with Mexico and its labor force, can you talk about the benefits to the Mexican labor force?

LLS: The government and the private sector have been working together with private and public schools to put in place the proper knowledge that employers require to participate in this type of industry. In the past, companies had to invest a lot in trying to increase labor skills in Mexico. Now I would say that one of the attractions, one of the advantages of investing in Mexico, is that we now are not only a cost-competitive country when it comes to labor, but we also have a young work force, and much has been done to ensure they have the proper skills and knowledge for industry. We have invested in research and development centers. Companies now are not only interested in having production facilities, but are also investing in R&D programs and resources, and governments are offering incentive programs to attract investment in that respect.

Within the entire automotive industry, including large and heavy trucks, vehicle assembly, production, commercialization, maintenance, and the auto parts market, there are at least 1.7 million people working. At least half a million are working on assembly and production of vehicles, and another half a million work in the commercialization of vehicles, which includes not only working with dealers, but also with respect to parts and replacement. So it’s a huge market offering a lot of employment for the Mexican people.

DD: In summary, what are the key points an automotive parts supplier considering a manufacturing facility in Mexico should be thinking about?

LLS: Being near the clusters where other automotive manufacturers are is one important consideration. Asian companies have gone mainly to the center of the country, American manufacturers to the north, although some of them are also in the center.

A new company investing in Mexico should really look for accessibility to large markets. As we were discussing, in Mexico export is one of the main activities, so the Mexican government has signed free-trade agreements with a lot of countries, not only in the region but also in Africa, Asia and Europe [Editor: In addition to NAFTA, Mexico is a party to 12 free-trade agreements].

Economic stability and a favorable business environment are also advantages in Mexico. The government has been working to maintain economic stability; we are not facing financial issues, we are not facing devaluation or integration issues. The economy is very stable, so companies will find that financial risk associated with investing in Mexico is one of the advantages that we enjoy.