Grand Rapids’ Downtown Market was opened in 2013 and serves as an anchor for further downtown redevelopment.
Photo courtesy of Downtown Market
by PATTY RASMUSSEN
G

overnor Rick Snyder had a big economic development win in 2013 when Michigan became the nation’s 24th right-to-work state, but he’s not resting on his laurels. The governor turned his focus to several other key components of statewide economic development — including regional collaboration, talent and work-force development — and syncing Michigan’s image, especially outside its borders, with reality.

Snyder says when he came into office the state had maps of different regions — about 20 different maps, in fact, one for every department of state government. Last year the state unveiled a new map with 10 geographically distinct regions called Economic Development Collaboratives, each with a specific point of contact.

“We’ve rationalized our lines to match natural prosperity regions,” says Snyder. “Instead of having a bowl of spaghetti of departmental lines, we have a map that makes sense.”

In August 2013, the governor unveiled the Regional Prosperity Initiative, a voluntary competitive grant process included in the 2014 fiscal year budget. The state is making $2.5 million available for grants to economic development collaboratives and metropolitan planning organizations. There’s one caveat: They must collaborate with business and non-profit organizations as well as representatives from local and regional economic development organizations, work-force boards, adult education providers and the higher education community. No collaboration, no money. The idea is to bring all the stakeholders to the table in order to achieve comprehensive, sustainable economic growth for the whole region.

“Now Northern Michigan [University] in Marquette is going over there to talk about how they can work off that same concept with Michigan Tech,” says Snyder. “There’s also a SmartZone over in Sault St. Marie that’s relatively new. In the Upper Peninsula region, there are three different places that can figure out how they can learn from one another and work together.”

Other examples include a video contest for high school students in Region 2 (Northwest) showcasing career opportunities in manufacturing organized by a regional education advisory group, Career Technical Education programs and community colleges; and Region 10 (Detroit) holding a mini-summit of educators from K-12 to university level, along with work force and economic developers, to discuss specific qualifications necessary in targeted industries. They focused in particular on healthcare and IT, and on creating “talent tours” to clarify distorted perceptions of certain industries, such as manufacturing.

Those same programs and many others have also been employed by the Grand Rapids Manufacturers Council to address their work-force issues. The Manufacturers Council has met regularly since 1989 to address issues of common concern, but also to share best practices and to build on the strength of their region. Even Gov. Snyder has said there are few areas in the state that do collaboration as well or as comprehensively as Region 4, the 13-county region in west Michigan that includes Allegan, Barry, Ionia, Kent, Lake, Mason, Mecosta, Montcalm, Muskegon, Newaygo, Oceana, Osceola and Ottawa. Some of the key cities include Grand Rapids, Holland and Muskegon. The area has had a great deal of success in attracting and holding onto businesses. In 2013, regional and state economic development partners generated well over $98 million in capital investment while retaining or creating more than 2,500 jobs.

Downtown redevelopment in Grand Rapids, from the Van Andel Arena to the brand new $30-million, 130,000-sq.-ft. (12,077-sq.-m.) Downtown Market, simply would not have happened without longstanding public/private partnerships, the Downtown Development Authority and the leadership of the Grand Action organization, a non-profit deeply committed to reinvesting in the city. The Downtown Market opened in spring 2013 and is much more than a place to buy locally grown produce and other goods. It’s a mixed-use facility bringing together every element of food production, distribution, marketing and education about local produce, which happens to be a significant economic driver in west Michigan. Agribusiness contributes $1.5 billion to the regional economy, from such global brands as Gerber, Kellogg Co., Butterball Farms and ConAgra.

The market is a year-round facility; there’s an outdoor market shed where dozens of artisans and farmers sell their wares, and an indoor, 24-vendor market hall, rooftop gardens, educational kitchens and meeting spaces. A newly built Heartside Park is right next to the market. The whole space, formerly derelict downtown lots, now hums with activity. The presence of the market has revitalized the urban housing market; former warehouses around the market area are being developed into apartments and lofts. Developers can scarcely work quickly enough to meet demand.

In the interest of moving people from the suburbs to the city, whether for work, school or health care, the region developed The Silver Line, a $40-million rapid bus transit project that will substantially lower commute times. 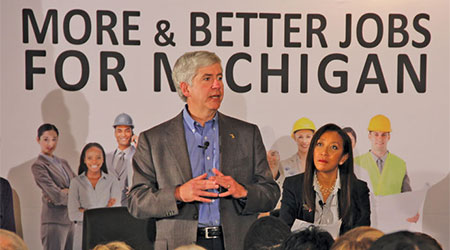 Governor Rick Snyder speaks about jobs in a town hall at Oakland Community College in Farmington Hills on October 10, 2013.
Photo courtesy of the Office of the Governor

The Rapid, the award-winning Interurban Transit Partnership which manages public transportation in Grand Rapids and five surrounding communities, broke ground on the project in April 2013 with service scheduled to begin in August 2014. The Silver Line includes 33 stations along nearly 10 miles (16 km.) of Division Ave., from Wyoming in the south suburbs to downtown. Division Ave. is a main artery into Grand Rapids that has seen better days. With the promise of more people coming into the city, there’s been a resurgence of economic activity along the corridor.

The emphasis on collaboration permeates every industry and sector from advanced manufacturing and medical devices to life sciences and agribusiness, and differentiates west Michigan from many of its regional counterparts. “There’s a unique cultural community openness to say, ‘We may not have the best idea, but if we work together we’re going to have a lot better ideas than if we just work independently,’” says Jay Dunwell, president of a third generation family-owned business, Wolverine Coil Spring.

He tells the story of one of his employees questioning the wisdom of letting other manufacturers in their facility to see how they operate. He told the employee, “We’re letting them in.”

“If we’re there to share, then you have to let it all out,” Dunwell says. “It’s through those types of structures and collaboration this community has risen to a world-class level of abilities, whether talent development, operational excellence or product design.”

Birgit Klohs is a 26-year economic development veteran and president and CEO of The Right Place, the Grand Rapids-based non-profit economic development organization serving as the region’s point of contact with the state. “We’re beginning to understand how crucial it is to represent ourselves as a whole region,” she says. “We can’t compete globally if each one of us ‘bakes our own loaf,’ as my mother used to say.”

Putting the Force to Work

Michigan’s unemployment rate stands at 9 percent, but slightly more than 58,000 jobs are available on the state’s employment website, mitalent.org. In an effort to close that gap, the governor hosted two summits in 2013 to bring business and industry together with education. “I call it ‘talent in three C’s,’ ” says Snyder. “Collaborate with the private sector to understand their need and demand. Create talent with the education sector in terms of the supply side. And connect those two worlds to do something different.”

The state’s Michigan Advanced Technician Training Program (MAT²) is one industry-driven approach to education. The three-year training program offers employer-paid tuition and on-the-job training with pay, and is open to graduating high school students or students currently enrolled in community college or four-year universities. At the end of their program, students receive an advanced associate degree and a full-time technician job. 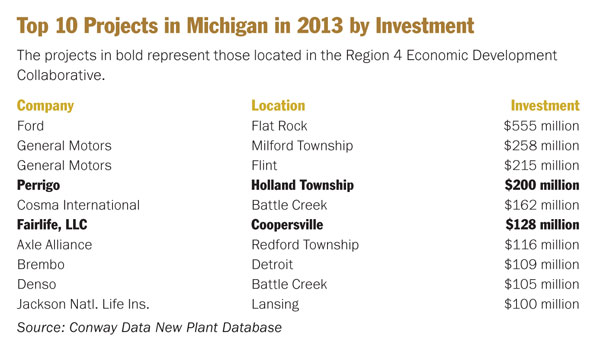 The Manufacturers Council also wrestles with finding suitable candidates for jobs in the state. “We’ve had a work force subcommittee for decades,” says Dunwell. “It’s been an active committee with various objectives throughout the year that have spanned the scope of attracting students to the manufacturing careers to training them and writing write papers about employability skills. This council has taken those papers to Lansing and Washington, D.C., to say ‘These skills are important to the manufacturing base.’ ”

Lauren Walker, a member of the Manufacturers Council and vice president of Ada Manufacturing for Amway, says her company has had a longstanding relationship with the local school systems that feed its work force — promoting STEM education and righting the perception of manufacturing careers. “The myth of the three D’s of manufacturing is still pervasive out there — dirty, dark and dangerous,” she says. “That’s not what we are today and it’s not our future.” 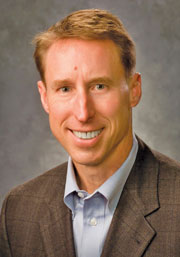 Plenty of businesses have figured out that Michigan in 2014 barely resembles Michigan of 2008. “We’ve made huge improvements,” says Snyder. “We were number four in terms of job creation in 2011 and 2012 for private-sector jobs and number four in high-paying job creation. That’s incredible when you consider that the only states that beat us were the ones that had large energy efforts going on. People expected us to be 50th. But many people still have the memory of Michigan from seeing graphics from Detroit or seeing blight in other areas. They have this perception that this is Michigan.” 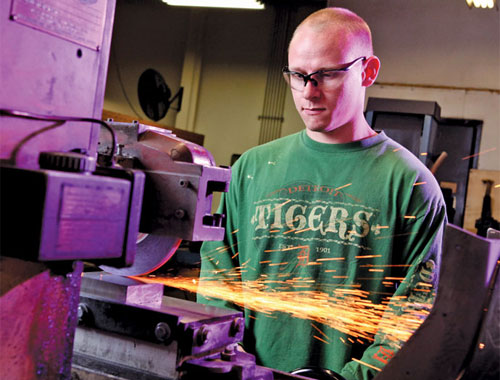 Snyder has been all over the place telling the Michigan story, but he’s got some heavy-hitting proxies out there with him.

“I took a recent trip to New York where we had Bill Ford, executive chairman of Ford Motor Company, Chris Ilitch, president and CEO of Ilitch Holdings, and Gerry Anderson, chairman and CEO of The Detroit Edison Company, with me so they could tell the story,” says Snyder. “It’s fine for me to be the cheerleader, but it’s a very powerful thing when you’re getting a referral from those who are essentially your customers.”