A Tale of Two Locations

Consultants say Indiana is best in the Midwest, but
don’t tell that to executives signing deals in Chicago. 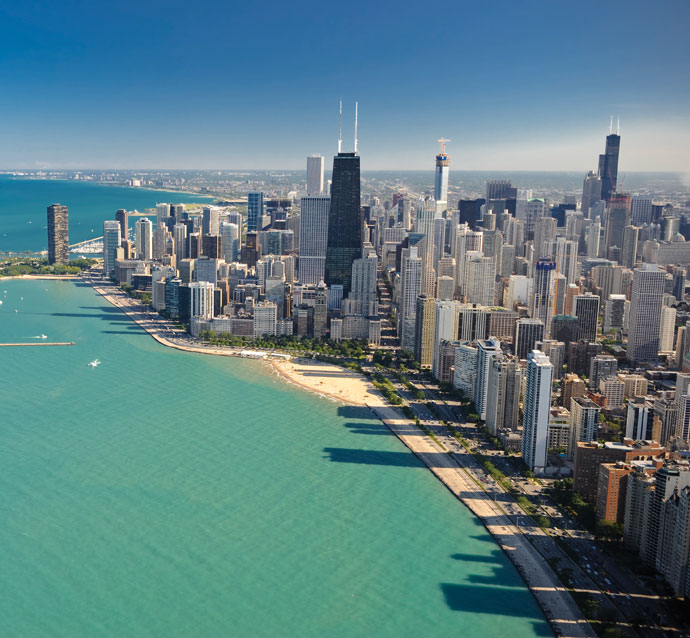 ndiana boasts the best business climate in the Midwest, say consultants who read Site Selection, but plenty of executives are voting for Chicago with their pocketbooks.

Call it a tale of two locations — one in the Farm Belt of low taxes, less regulation and a lot more government support for economic development; the other in America’s second-largest financial market and the Midwest’s most politically influential city.

If this matchup were a heavyweight title bout, it would be billed as Indiana vs. Chicago. The Colts vs. the Bears. The Pacers vs. the Bulls.

Instead, it’s an economic development competition, with certain industries gaining a foothold in the Hoosier State while others prefer the more blustery climate of the Windy City.

Unlike sports, however, there’s room enough in the competition for corporate facility projects for more than one winner. Just don’t tell that to the folks in Chicago, a city that in 2013 topped all Midwest locations in new and expanded business facilities.

Respondents who voted Indiana No. 1 in the region offered comments such as:

Ironically, these same consultants rated Illinois’ business climate last in the Midwest — a ranking that is belied by the surge of corporate executives choosing Chicago for their companies’ headquarters operations.

In late 2013, both the Gogo Corp. and Assisted Living Concepts LLC announced plans to relocate their corporate headquarters to downtown Chicago, joining a growing trend of regional and global headquarters making the Second City the new No. 1 on their location list.

ALC announced Dec. 10 that it will relocate its headquarters from Menomonee Falls, Wis., to Chicago, moving 100 employees into leased space at 330 N. Wabash.

Gogo considered options in Colorado, where the firm’s business aviation division is located, but ultimately selected Chicago for a variety of reasons, according to Steve Nolan, Gogo’s communications director.

“We have run out of space in our current location in Itasca, and we wanted to bring everybody back into one building,” says Nolan. “The facility at 111 N. Canal St. gives us the ability to do that, and there is definitely an attractiveness to the city for attracting talent.”

Gogo, located in Itasca since 2007, is moving to a building that already houses such high-tech firms as Braintree and FieldAware, among others. The city of Chicago is home to more than 1,500 digital technology companies that employ more than 40,000 workers — a number that increased by 21 percent in 2013.

According to Built in Chicago, a new technology startup is launched in Chicago every 24 hours.

“Gogo is a perfect example of the companies we are looking to attract to Chicago and to support through ChicagoNEXT,” said Jeff Malehorn, president and CEO of World Business Chicago. “We welcome Gogo and look forward to working together as we continue to accelerate the growth and expansion of Chicago’s tech sector.”

Proximity to key customers made the move downtown even more attractive, notes Nolan. “Our new building is right next door to Boeing and a stone’s throw to United Airlines,” he says. “We are working to become a line-fit solution with the major air-frame manufacturers. Our goal is that one day the aircraft will come off the assembly line with Gogo already installed on it.”

Nolan says Gogo likes its new location “from a talent equation. We will be in the West Loop area of Chicago. A number of technology companies are located there, and we are very interested in what Mayor Emanuel is doing to grow tech firms in Chicago. Google and Groupon are both just down the street from our new headquarters location.”

Of the $2.3 billion in new capital investment in the Chicago MSA in 2013, $1.3 billion was invested in the City of Chicago.
Photo courtesy of Choose Chicago

Nolan says Gogo will have naming rights to the building, which is currently known as River Center, once Gogo moves into the facility in the spring of 2015. CBRE brokered the deal on behalf of Gogo, which is leasing the space from Sterling Bay.

WBC’s Malehorn notes that “Gogo was a big win for Chicago. We were competing with Denver for that opportunity. The area around information and digital media is a real trend that we are capitalizing on. About one in five projects that we have handled since 2011 are in that sector. We had 367 new digital startups in Chicago in 2012 alone.”

Malehorn adds that the pace even accelerated in 2013. “We tracked 377 major business expansions in Chicago in 2013, including 153 that occurred in the city proper,” he says. “These projects created 29,192 jobs and retained 19,737 jobs. Of the $2.3 billion in capital investment in the metro area, $1.3 billion was invested right here in the city itself.”

Indiana, meanwhile, is not taking a back seat to Chicago. Far from it, says Eric Doden, president of the Indiana Economic Development Corp.

“We are focused on being a state that works,” Doden says. “We passed a 5-percent personal income tax cut, and we have capped property taxes on all classes of property while still having a budget surplus of $2 billion in reserves. We have a triple-A credit rating from all three ratings agencies. People make investment decisions on the predictability of future cash flow, and right now people are increasingly making the decision to invest in Indiana.”

Since enacting right-to-work legislation more than a year ago, Indiana has seen an influx of prospects, notes Doden. “We have had 120 companies say to us directly that this was a factor in their decision to invest in Indiana. Since enacting this policy change, Indiana has won substantial manufacturing investments from Chrysler, Subaru, Toyota and Honda. In the case of Chrysler, they are bringing more than 1,000 new jobs to Kokomo.”

GEICO’s decision to locate 1,200 new jobs in Carmel was one of Indiana’s biggest wins of 2013. The 109,000-sq.-ft. (10,126-sq.-m.) customer service center project in the Indianapolis area was named the Economic Development Project of the Year by the Indy Chamber.