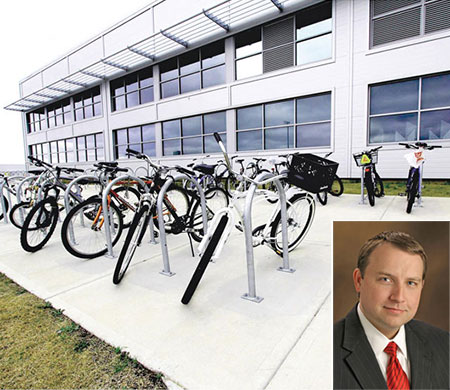 Bill Adams (inset), economic development specialist for TVA, says for OEMs such as VW, whose LEED-Platinum plant on a TVA Megasite in Chattanooga is pictured here, certification has become “part of the lexicon” at the outset of site selection due diligence.
Photos courtesy of VW

2014 marks the 10th anniversary of the granddaddy of them all when it comes to large site certification for industrial development.

ennessee Valley Authority’s Megasites Program, conducted in partnership with McCallum Sweeney Consulting, was created in 2004. A decade later, of the seven megasites approved for offer through the program, five have sold, and to such customers as Dow Corning/Hemlock Semiconductor, Volkswagen, Paccar, Toyota and Severstal.

“Certified Megasites are still in a league of their own, since the certification requirements are very rigid and certifications are still being done by a few consultants, primarily by McCallum Sweeney Consulting,” says Bill Adams, economic development specialist for TVA, who says the late Ed McCallum “brought economic development and site selection to an advanced level of professionalism.” For OEMs such as VW and Toyota, says Adams, certification has become part of the lexicon.

“They’ll ask if the site is certified. It’s now an expectation that the site should be certified or at least studied to certification standards. This saves time and money and reduces risks for investing companies.”

Two certified TVA Megasites are still available, in Hopkinsville, Ky., and near Memphis. They are among the pages of 1,000-acre-plus sites in the US and abroad listed in Site Selection’s 10th annual Super Sites charts, available at www.siteselection.com beginning in January 2014. 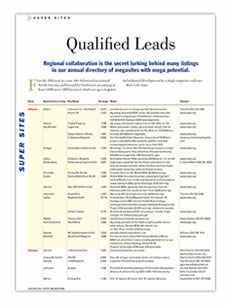 “It’s still a good number,” says Adams. “Most large-scale, high-impact projects will range from 500 to 1,500 acres, with automotive OEMs being on the higher side. The 1,000-acre mid-point allows most entities to respond to a project inquiry to either make the argument that there is plenty of land or there perhaps are complementary land uses surrounding the site that lend themselves to meeting the intention of the higher acreage request. For instance, if the site requirement is 1,500 acres and I technically only have 1,000 acres, but I know that the primary reason the client wants so much acreage is buffer, I might be able to show how the surrounding land uses either are or will be complementary to industrial [through zoning] or will never be developed at all because of terrain or some other restrictive variable.”

Is parcel assembly getting any easier?

“It’s still a mixed bag,” says Adams. “It largely depends on the number and interests of the landowners and the team leading the property assemblage effort. Property is very personal, particularly when it’s been in the family for generations. You can’t blame folks for taking a pause before considering the sale of their land. It takes a lot of ingredients and skilled players to pull off the assembly of property even after you’ve determined that the site can meet the technical requirements for timely, large-scale development.

“The thing I always stress is that the process is a journey, not an event, and you have to be methodical,” says Adams. “The team has to be multi-layered [ED professionals, politicians, utilities, railroads, educators, etc.] and the good news is that collaboration on megasites is growing.”