Large-scale plans in Istanbul and Aliaga are being followed by large-scale action. 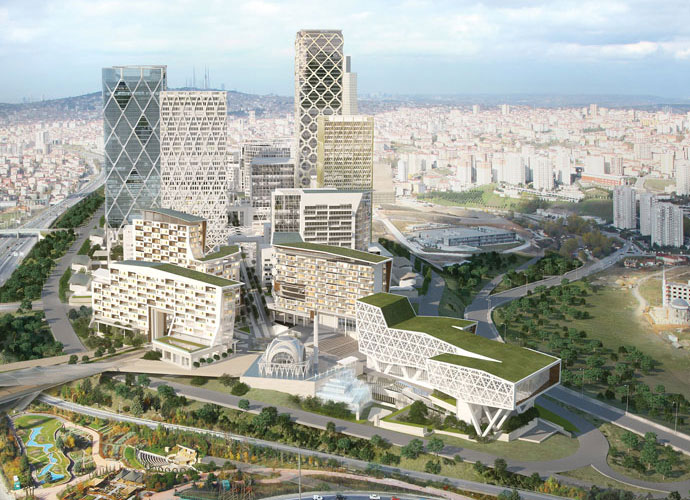 isten to the numbers and they’ll tell you: The world’s economic center of gravity is shifting, and emerging markets are the bull’s eye. That’s why Turkey sees itself becoming one of the top 10 national economies in the world as this century’s first generation comes to maturity. And it’s why its government in 2009 launched an effort to establish Istanbul as an international financial center.

In addition to being an age-old trade crossroads, Istanbul is positioned at exactly a seven-hour time difference from both Tokyo and New York. It’s at least one factor in why the city has seen regional headquarters arrive from GE Healthcare, Coca-Cola, GlaxoSmithKline, Microsoft and World Bank’s International Finance Corp., whose first operations center outside of Washington, D.C., landed in Istanbul.

HOK developed the master plan and is designing two high-rise office towers for the US$2.6-billion Istanbul International Financial Center (IIFC), which is being built on a 70-hectare (170-acre) site on the city’s Asian side. The IIFC will include approximately 4.2 million sq. m. (45 million sq. ft.) of office, residential, retail, conference, hotel and park space.

Construction work is scheduled to be complete by the end of 2016. The Turkish construction firm Akdeniz Group has been a key project partner. So has Arup, which is separately developing a master plan for the Istanbul New Airport. With an ultimate capacity of over 150 million passengers per annum, it is expected to become one of the largest in the world.

More than $100 billion of investment will be required to meet growing energy demand in Turkey, says Ilker Aycı, president of the Investment Support and Promotion Agency of Turkey (ISPAT). On the petrochemical side, interest is running high from multinationals, and from nations themselves.

Turkey’s largest petrochemical complex is Petkim, located near Izmir. The complex is owned by a Turkish-Azeri consortium headed by Azerbaijan’s state-run oil company SOCAR, a major partner in the Trans-Anatolian Natural Gas Pipeline. SOCAR plans to invest between $4.8 billion and $5 billion in the Star Refinery project, located in Aliaga Izmir on the Aegean coast. The refinery is the first project to be issued a “Strategic Investment Incentive Certificate” since the introduction of Turkey’s new investment incentives system in 2012. In early December 2013, the Export-Import Bank of the United States authorized a $640.7-million direct loan to Star Refineri A.S. that will finance the export of American-made oil refinery equipment to the Aliaga site.

“By 2018, we will have made $9 billion of investment in the Petkim Peninsula along with STAR Refinery, Petkim Container Port and STEP Power Plant,” said SOCAR Turkey CEO Kenan Yavuz in June 2013. “Our target is to become one of the three biggest groups of Turkey in 2018 with a $15- to $20-billion turnover and 10,000 employees.”