Approvals move forward for major energy projects, even
as their strain on infrastructure and prices continues. 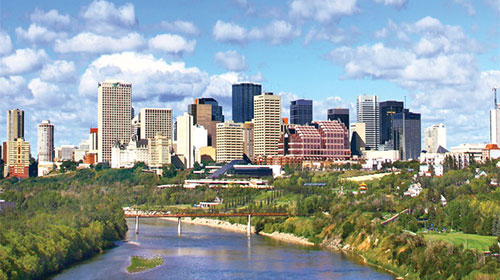 Edmonton’ office and industrial markets are at once buoyed by the energy sector and strained by the demand and rising construction costs that come with it. Meanwhile, mixed-use development is surging downtown.
Photo courtesy of Edmonton Tourism

sked in 2013 to what degree they agreed with the statement “The oil and gas industry provides significant benefits for the whole country,” only 54 percent of those polled in Québec somewhat or strongly agreed. The results bumped up slightly to 62 percent in Ontario. The result was 70 percent in Western Canada.

A majority of the 2,000 Canadians polled are in favor of all five of the major pipelines currently under study and intended to carry Western Canadian oil to market, according to the national survey conducted by Québec-based polling and analysis firm CROP.Meanwhile, other approvals are paving the way for the homegrown energy economy Canadians seem to want.

In December, even as LNG terminal projects in the US crawl through permitting and regulatory processes (see p. 48), Pacific NorthWest LNG welcomed the decision by Canada’s National Energy Board (NEB) to grant a license to export up to 22.2 million metric tons of liquefied natural gas (LNG) per year for 25 years beginning in 2019. Pacific NorthWest will submit a separate environmental assessment to national and provincial authorities in early 2014.

The proposed facility on Lelu Island in Port Edward, near Prince Rupert, represents an investment of C$9 billion to $11 billion, and will create up to 3,500 jobs during construction. Once operational, the LNG facility will create 200 to 300 permanent, full-time jobs. The proposed facility would liquefy and export natural gas produced by Progress Energy Canada in northeastern British Columbia. Among other attributes, the site is 68 hours of shipping time closer to Shanghai than the Port of Los Angeles.

What’s connecting the Montney to the coast? The planned $5-billion Prince Rupert Gas Transmission project from TransCanada Corp., which was selected by Progress in January 2013 to design, build, own and operate the pipeline. That pipeline, expected to be in service by the end of 2018, is projected to create an estimated 2,500 direct construction jobs over a three-year construction period.

TransCanada is also developing a second line to the coast, the Coastal GasLink Pipeline. In addition, TransCanada proposes to extend its existing NOVA Gas Transmission Ltd. (NGTL) system in northeast BC to connect both to the Prince Rupert Gas Transmission project and to additional North Montney gas supply from Progress and other parties.

The reverberations from such megaprojects are felt in office markets as well as in the countryside. In a research report on the Canadian office market after the first quarter of 2013, CBRE wrote, “We expect that business spending — especially by companies tied to mining and oil and gas — should support Canadian economic growth going forward, although a renewed effort to reign in capital budgets may effect growth at the margins. In its place however, is a number of large infrastructure projects in all parts of the country. Sectors of the economy which are expected to benefit are transportation, public transit, energy and physical structures.”

A report released by Avison Young on Dec. 12, 2013, sounds a note of caution, particularly in Edmonton:

“Although the buoyant economy in Alberta has been a boon to businesses in the Capital region, a rising tide does bring challenges,” said the firm. “In particular, the cost of labor in the province has been driven through the roof by high-paying oilfield jobs. After a brief respite during the 2008 recession, inflationary pressures on wages have begun to creep into the rest of the market. In the construction industry, this means higher costs than anywhere else in Canada. Compounding this situation is the massive reconstruction effort following the Southern Alberta floods in June, which is consuming large quantities of primary building materials such as drywall, concrete and steel.”

Builders can now be expected to pay approximately $78 per sq. ft. (psf) in construction costs on a typical warehouse development, excluding the cost of land, says Avison Young. This compares with $75 psf in Vancouver and $60 psf in Toronto.

That said, still more opportunity may be on the horizon. The municipal partners of Alberta’s Industrial Heartland Association (AIHA), a cooperative effort of the Counties of Lamont, Strathcona, Sturgeon, and the Cities of Edmonton and Fort Saskatchewan, in November applauded the Government of Alberta’s newly introduced Building New Petroleum Markets Act, which provides the Alberta Petroleum Marketing Commission (APMC) the mandate and authority to examine the use of provincial royalty barrels to maximize energy resource value.

The Bitumen Royalty in Kind (BRIK) program was the catalyst for the new North West Redwater Partnership’s $5-billion Sturgeon Refinery project, now under construction. Alberta has also used its royalty barrels to help backstop important pipeline infrastructure such as the Energy East Pipeline. Through this new act, said the AIHA, an enhanced range of options exists for marketing, processing, and exporting the expected new barrels that continued oilsands development will produce.

“Alberta’s Industrial Heartland is already known as an important link in the entire oil sands processing and logistical chain, said Ed Gibbons, the AIHA’s vice chair. “We suspect new opportunities will arise in the future and with this new act, the province is in a position to proactively respond to these opportunities.”