As two worthy companies steel for battle, Arkansas could be the ultimate winner. 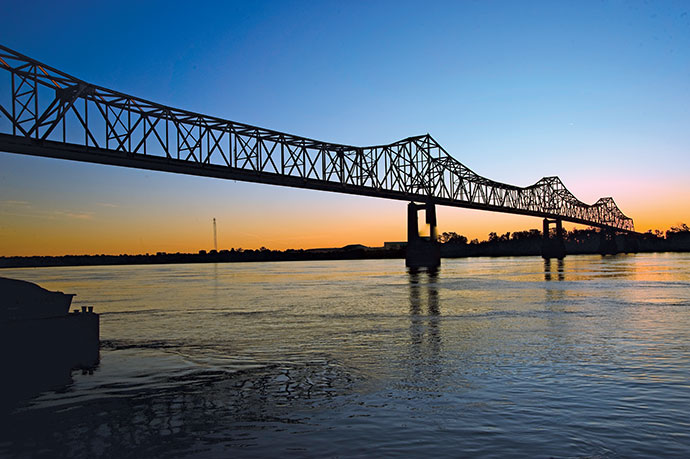 Access to the Mississippi River, seen here flowing under the bridge at Helena, Ark., is an important site selection factor for steelmakers and other operations because of the ability to affordably haul by barge.
Photo courtesy of Arkansas Dept. of Parks & Tourism
by ADAM BRUNS
T

he global steel industry is a small club. The number of good sites for steel manufacturing is small too.

When one of those elite players sets foot in the backyard of another, sparks can fly - the kind produced by legal friction, not metal fabrication.

Last year, a site in Osceola, Ark., near Blytheville, passed over 10 years ago for an investment by SeverCorr, welcomed news of a new $1.1-billion plant from Big River Steel, headed by former Nucor executive John Correnti and to be backed in part by German government capital. Under a state incentives law for major projects - Amendment 82, a "superproject" closing fund measure first passed in the 1990s and tweaked by voters a few years ago - the Arkansas State Legislature approved $125 million in financing and tax breaks. The Arkansas Dept. of Environmental Quality (ADEQ) issued the air permit in September.

But Nucor-Yamato, which operates two plants of its own near Blytheville and has been in the area since the late 1980s, has done all it can to stop the project from moving forward, beginning with filing a challenge to the air permit last October.

In January this year, ADEQ granted Big River Steel permission to move forward with construction, but not operation, of the plant, pending the permit appeal. An administrative law judge affirmed the permit in March, and Nucor-Yamato immediately appealed.

This spring, according to minutes from the April 25 meeting of the Arkansas Pollution Control and Ecology Commission, Nucor attorneys continued the attack, accusing BRS of misrepresenting material facts, and saying the administrative law judge had "incorrectly dismissed Nucor's claims regarding the hurried issuance of the permit, the outside factors that pressured ADEQ to issue the permit in such a hasty manner, and the lack of proper notice to the public." The attorney for BRS dismissed the claim of outside pressure as "baseless" and Nucor's claims about inaccurate emissions data "meritless," and he asked the commission to adopt the previously recommended decision.

"He argued that BRS is about to construct one of the most technologically advanced steel mills in the world in Mississippi County," say the meeting minutes. "He stated that as part of its duty to ensure the environmental well-being of the citizens of Arkansas, ADEQ worked tirelessly to ensure that the facility will feature the best pollution control technology in the United States and to confirm that the BRS facility will not harm public health or the environment, and he asked the Commission to adopt the ALJ's Recommended Decision."

The motion was adopted. But the battle is far from over.

In early May the Osceola City Council unanimously approved $1.5 billion in bonds for the project, with terms calling for the city to own the property and lease it to BRS for $1 a year, and for BRS to pay 35 percent of millage taxes to the city for 20 years. At that time it was hoped a groundbreaking might take place in late June, with construction to follow over the next 20 months, pending a final vote on funding from the German investors due to take place June 12.

New statistics from the US Bureau of Economic Analysis show that Pine Bluff, Ark., had the largest percent change in real per capita personal income in 2012, up 7.9 percent from 2011 to $36,455. The state's 2012 real per capita personal income of $38,223 was among the dozen lowest in the nation even after having risen by 6.3 percent in 2011 and 2.2 percent in 2012. In terms of regional price parities for rent, goods and services, only Mississippi's index was lower than that of Arkansas, with the Jonesboro, Ark., metro area the second lowest in the nation.

Jonesboro in early June welcomed news that TrinityRail Maintenance Services, a subsidiary of Dallas-based industrial, energy, transportation, and construction company Trinity Industries, will establish a new 350-job facility to provide railcar maintenance and services. Also in early June, Pine Bluff welcomed the announcement of a new rice mill at the Port of Pine Bluff from Optimum Group's Southwind Milling Co. that will create 25 new jobs when it ramps up early in 2015.

"Our project timeline called for breaking ground in northeast Arkansas by the end of 2013," says an open letter from Correnti on the BRS website. "We are disappointed by the delays to our progress due to unwarranted litigation brought forth by Nucor Corporation in its continuing attempt to keep Big River Steel from entering the market. The misuse and abuse of the legal system in this manner is a sad day for all of corporate America. I am fully confident that the facts will prevail and we will soon be fully under way with our project. Once we are, Big River Steel will fast become an engine for economic growth as we initially create 2,000 construction jobs and 525 high-paying permanent jobs."

All of the above puts the Arkansas Economic Development Commission in a bit of a sticky wicket. Who knew that the first chance to use super-project deal closing funds would turn into a super tussle instead?

"I'm fairly certain when the process was created, nobody ever thought we'd be taking a project through the process that there was some opposition to," says Grant Tennille, the AEDC's executive director. "I think everybody thought there would just be a big party, and it would pass in two seconds. That was certainly not the case with this project, but in a lot of ways the project and the state were better for it, because there was a fairly intense level of scrutiny as to what the economics of this thing really look like.

"Nucor has been a fantastic partner for the State of Arkansas for 30 years now," he says. "I know that when we begin recruiting a potential competitor, it really looks like an affront, a sort of direct attack. Nothing could be further from our minds. We want Nucor to continue to grow and thrive. But we think and believe - and our belief is backed by conversations with economists and others - that the area and the steel marketplace can support another entrant."

What BRS brings, he says, is more shapes and sizes of flat-rolled steel "than almost anyplace else on the planet," says Tennille. "If we can become the largest market for that product, we think - and we're beginning to already see evidence of the fact - that people looking for that product in order to make other things will beat a path to our door. And we'll have more service centers, more pipe manufacturers, more of all the kinds of industries that will be the customers of these metals that will spring up in that corridor."

The BRS site in Osceola has been described as "steel mill heaven" because of its access to the Mississippi River combined with being on stable land that doesn't get flooded, ideal electric service and Class I rail.

Tennille says he understands that his friends at Nucor "are not particularly pleased with me right now," because he knows they are concerned with a) the impact of a new competitor in the nationwide and worldwide market for flat-rolled steel, and b) the impact on their own workforce, as workers might migrate to BRS and force Nucor to replace them. But addressing that challenge gets at what Tennille calls the perfect job description for any economic development agency.

"We're trying to raise the statewide average wage in Arkansas - if you want to bust it down to the atoms, that's what the mission is," he says. "So a good outcome for us is that people who have skills are in high demand and can command more money for their services. What we have to do, and what we're working on very quickly right now, is to make sure our people, some of whom are unemployed and many of whom are under-employed, have a pathway to get these skills. We have to make investments at the high school, two-year and four-year college levels to ensure the pipeline for those folks exists. A bad outcome is both operations running at less than capacity because they can't find the people to make their operations go."

Tennille is confident the marketplace over the next decade is going to be robust enough for both Nucor and Big River to succeed, encompassing not just automotive and related end uses, but the lucrative electrical steels market. Ultimately, "if these things get built, they get operated," he says, alluding to the small but longstanding family of major steel mill locations. "You look at what happened with that ThyssenKrupp project in Alabama - nobody's going to just let that thing sit there. Somebody will figure out the right prices and operate it to make money. You also can't load it in the back of a truck and move it somewhere else. It's heavy, it's sticky, and we want stickiness."

" I know that when we begin recruiting a potential competitor, it really looks like an affront, a sort of direct attack. Nothing could be further from our minds."

Meanwhile, he says, there are three projects in the queue that could be the next to qualify for Amendment 82 assistance. Moreover, he says, "If you make pipe, and you want to locate at the point of the isosceles triangle between those two facilities, and your goal is to shorten your supply chain and have some competition for your business, I'm okay with that too."

As the giant steelmaking project hangs in the balance, other good news in the metals sector is coming to Osceola. In June BlueOak Resources, which mines high-value metals from e-waste, announced it had partnered with the Arkansas Teachers' Retirement Fund, a consortium of European and domestic investors, and the Arkansas Development Finance Authority towards the build-out of the first urban mining refinery in the US capable of retrieving valuable metals including gold, silver, copper and palladium from e-waste. The parties have invested an initial capital amount of $35 million in what they call the first urban mining facility of its kind in the nation, employing 50 people when it ramps up by the end of 2015.

You'll never guess where the company got the idea.

"BlueOak's refining business model is inspired by the quintessential case study of the mini-mill disruption of the steel industry, which ushered in a new era of steel production," said the companies. "The distributed nature of mini-mills allowed lowest cost production of steel from recycled steel scrap. BlueOak intends to capitalize on the high demand for 'technology metals' like gold, silver, copper and palladium by creating distributed urban refineries in the US and throughout the world that recover high-value metals from e-waste."