Munich, London and Paris top EU rankings. Ukraine could be an outlier with the inside track. 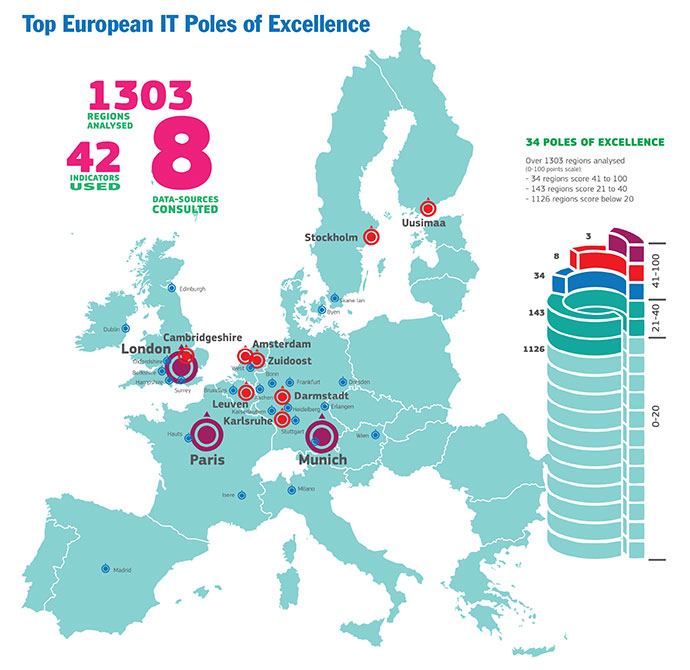 n April, the European Commission's special project on European ICT Poles of Excellence (EIPEs) released a new atlas of the top 34 European ICT locations, across 12 countries, out of more than 1,300 European regions qualified for consideration.

Munich, London, Paris, Karlsruhe (Germany) and Cambridgeshire, UK topped the report's composite rankings, followed by Stockholm, Sweden (home of Ericsson); Darmstadt, in the German state of Hesse; the Finnish region of Uusimaa; Eindhoven and Amsterdam in the Netherlands.

"This is proof that digital success comes through a willingness to invest, an open mindset for innovation and planning," said Neelie Kroes, vice president of the European Commission. "Europe needs to build on these values today to be a global leader in technology."

The report evaluated locations by such yardsticks as employment, venture capital, research/patent and computer science talent. For talent, the UK featured eight out of the top 10 regions. Germany led all competitors in research and patenting. Lisboa in Portugal and Rzeszowski in Poland are the fastest growing regions for ICT employment. And the top three finishers overall - Munich, Paris and London - were also the locations attracting the most venture capital.

"A region's ICT excellence is linked to research and development activities, to the ability to take knowledge to market (innovation) and to building an intense business activity around this innovation," said the study. "It seems that ICT thriving regions:

"This effect," said the report, "is also observed in places like the Silicon Valley (USA), Bangalore (India) or Changzhou (China)."

Germany leads the way among top performers, accounting for 12 of the 34 locations. The United Kingdom comes in second with seven.

The report addresses the EU Strategy to reinforce Europe's industrial and technology leadership in ICT. Its findings will feed into the EURIPIDIS project, which focuses on ICT innovation policy and on transferring the best research ideas to the market. The EU's Joint Research Center plans to analyze the technological diversity of ICT activity and its evolution, noting that this "will help identify complementarities between locations."

The report looked at all 1,303 EU regions in terms of ICT activity and assigned scores according to its relative weight. One hundred and nine locations - including Gdansk and Wroclaw, Poland; and remote locations such as Samos, Greece, and the Shetland Islands - had a score of zero. Other location scores include the manufacturing city of Solihull, UK, at 9; the Loire region of France at 11; and even the generally praised outsourcing location of Sofia, Bulgaria, at just 17. Only 14 percent of the regions scored above 20 points, and many of those were neighbors - half of the top 34 locations were part of such agglomerated regions, lending credence to longstanding cluster formation theories.

But all - even the champions - have their strengths and weaknesses: No. 1 Munich, while leading all EU regions in the networking criteria, places 32nd in the agglomeration indicator of location of ICT R&D centers, 1,264th in turnover growth by ICT firms, and 1,265th in growth in ICT employment.

The EU ICT report analyzed three elements (business activity, R&D and innovation in the ICT sector) on the basis of their intensity, their internationalization and networking. The findings relied on a Composite Indicator bringing together 42 Indicators to evaluate ICT activities. Several data sources and databases were used to elaborate the indicators and measurements: university rankings, citation indexes, information on European research projects' collaborations, how many global top R&D investor companies in ICT are present in each region, venture capital funding or employment data and companies' turnover information. 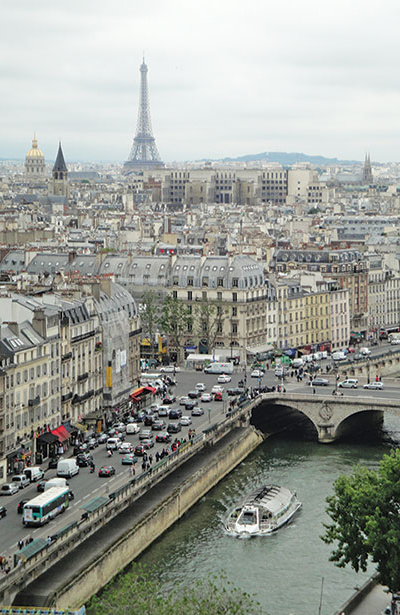 Paris was among the top three European hubs for IT, according to a recent EU report, in part because of the city's strong venture capital presence.
Photo by Scott Larsen

All leading regions "have global reach, with intense cross-border activities in ICT R&D, innovation and business and have gained an enviable hub position in a usually very complex web of network connections," says the report of the leading locations. "Also, the current assets of each region appear to be rooted deep in time, with their current activities and profile resulting from a history [of] several decades as regards their industrial structure, policy decisions, institutional settings, migration and education outcomes, etc."

Among the places not considered in the study was Ukraine, whose EU membership some countries (Poland, Germany) supported at an emergency summit on Ukraine in March while others - notably France - opposed it.

In late May, the Ukrainian government held a summit of its own in New York City, where the country's ambassador to the US Olexander Motsyk, among others, announced "a strategic initiative that will secure a brighter economic future by developing stronger and more permanent solutions, including IT cloudsourcing. The vision is to make Ukraine the Silicon Valley of Europe by securing 10-15 percent of the global IT outsourcing industry, estimated at US$288 billion in 2013."

To do that, the government says its goal, in partnership with leading international companies, is "to train an additional 100,000 IT professionals before 2020, who will all get a job in the national IT industry and generate $10 billion in export revenues."

According to presentation materials from the event, in 2013 the volume of Ukraine's e-commerce market expanded by 40 percent, with a significant increase in the number of local IT companies as a new law implementing a tax deduction for IT companies came into force. The biggest investing countries in Ukraine's IT sector are the US, followed by top EIPE regions UK, Germany and the Netherlands.

Kiev is home to 38 percent of the country's approximately 230,000 IT personnel, followed by Kharkiv with 19 percent and Lviv with 14 percent. The country's largest IT employers in 2013 were EPAM Systems (2,850 employees in five cities), Luxoft (2,612), SoftServe (2,400) and GlobalLogic (2,278). The Ukraine government says the country graduates 14,000 IT professionals and technicians annually, and claims its talent base is fourth overall in the world behind the US, India and Russia.

Time for a Checkup

Two weeks after the EU report's release, the World Economic Forum released a new report that examines the long-term growth of the digital economy and the viability of the infrastructure that supports it.

"Delivering Digital Infrastructure: Advancing the Internet Economy," produced in collaboration with The Boston Consulting Group, focuses on current threats to digital infrastructure - including fixed- and mobile-Internet infrastructure, telecommunications equipment and devices, and cloud infrastructure - in the US, Europe, and emerging markets.

"The quality, speed and extent of connectivity will be increasingly important factors in business and economic decisions, including where companies decide to expand or locate new facilities."

Europe's "digital health" is in particular need of attention. According to the report, "the lack of a single digital market and greater infrastructure investment will make it difficult for the EU to capitalize fully on the benefits of the Internet economy."

Internet-based economic activity is expected to reach $4.2 trillion in the G-20 nations by 2016, or more than 5 percent of GDP (not including a whole universe of pursuits not captured in GDP figures).

"The digital economy is growing at 10 percent a year, significantly faster than the economy as a whole," says the report. "About 2.5 billion people are connected to the Internet today, a third of the world's population; there are projected to be about 4 billion users by 2020, or more than half the global population. Digital services are still in their youth. They have the potential to revolutionize entire industries - such as health care and education - with enormous social and economic impact. The quality, speed, and extent of connectivity will be increasingly important factors in business and economic decisions, including where companies decide to expand or locate new facilities."

"Governments especially need to recognize the economic and social benefits of digital connectivity and services," said Jon Fredrik Baksaas, president and CEO of Telenor Group. "They can help to create environments in which dynamic digital economies can flourish by taking a long-term view and adopting a forward-looking approach to policy and regulation, ensuring incentives for investments."