China’s Ace in the Hole

Does Hong Kong remain a predominant economic hot-spot in East Asia 17 years after ‘The Handover’? 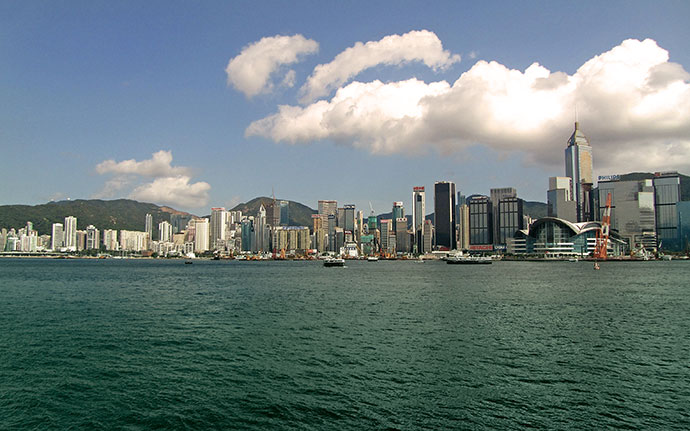 Policy measures introduced over the past decade have helped open the flow of financing between Hong Kong and Mainland China.
Photo by Soo Jones-Kelley
by SYLVAIN DEMORTIER, DOUGLAS ADAIR and HERMINIO ANDRES
K

nown as the city "where the East and West meet," Hong Kong remains one of the world's premier financial capitals, even in the midst of many systemic changes in the global marketplace. Today, despite investors' uncertainty about China's transitioning economy, Hong Kong's performance over the past 17 years begs the question: With the territory's predicted downward spiral under Chinese jurisdiction now almost two decades late, what's next for the prosperous city-state as a new chapter in international trade unfolds?

Hong Kong's current role as a powerful investment vehicle for entering Mainland China first took root in the early 1980s after PRC Chairman Deng Xiaoping created the first Special Economic Zone (SEZ) in the industrial city of Shatoujiao (Shenzhen). Subsequently, respective investment in Hong Kong and Mainland China has often proved to be mutually advantageous to both regions, given the city-state's vital role as a trade intermediary between actors in the East and West. Today, their symbiotic relationship is evidenced by Mainland China's status as Hong Kong's number one trade partner, representing 54 percent of its total imports in the first three months of 2014.

In its capacity as a trade intermediary, Hong Kong has become more efficient and effective for two reasons. As a Special Administrative Region (SAR), it established improved trade channels to China, in turn creating new bilateral agreements with foreign states that have likewise strengthened trade relations with the West. In 2001, the territory's average export per month was approximately US$17 billion. In 2005, it reached $23 billion, and now in 2014, it's increased to $36 billion. A great deal of this progress can be attributed to the creation of CEPA, the Closer Economic Partnership Arrangement of 2003. The Arrangement aims to boost investment and trade by reducing tariffs and regulatory barriers between the Mainland and the SAR.

The positive impact of new trade partnerships between China and Hong Kong was also bolstered by setting new rules called the "Avoidance of Double Taxation and the Prevention of Fiscal Evasion with respect to Taxes on Income." Not only have trade channels between Hong Kong and China improved, but also channels to the West, with the SAR currently engaged in more than 200 treaties and agreements with foreign governments. Another driving force behind the formation of these partnerships has also been the territory's tax policy. This combination of factors encourages investors to establish holding or intermediate enterprises in Hong Kong that allow them access to the Chinese market.

Hong Kong is currently engaged in more than 200 treaties and agreements with foreign governments.

The Chinese government also eased regulation over travel between the two states in 2003 with the IVS policy, or Individual Visit Scheme. This mandate helps Mainlanders gain access to the Hong Kong region. Chinese-Hong Kong immigration saw an incredible increase in travel, going from 6.6 million Mainlanders crossing the border in 2006 to 17.1 million in 2013.

Finally, the Central government also took steps in opening the flow of financing between Hong Kong and Mainland China. The first action was in 2004 with the introduction of CNY (China Yuan) deposits, remittances and credit cards in Hong Kong. In July, the Chinese Central Bank developed the offshore bond market for CNY, otherwise known as the "Dim Sum Bond." This gave Hong Kong an additional tool to help foreign companies fund themselves with Chinese currency upon entering the market, as seen with McDonald's in 2010. In 2009, the establishment of the Pilot CNY trade settlement scheme authorized certain Mainland companies to trade directly in Chinese Yuan with their counterparts in Hong Kong. Together these policies have helped to position the CNY as a major world currency.

These measures show cooperation on three main aspects of trade that are conducive to forming a highly successful business environment - the flow of goods, information and money. Hong Kong's success in opening trade channels between East and West is confirmed by the amount of FDI the city-state currently attracts per annum - $457 billion in FDI, 37 percent of which came from the Chinese market. Inversely, Hong Kong's FDI represented $664.6 billion, 47.7 percent of China's total FDI.

Given the many factors that contribute to Hong Kong's strong position in today's global market, in coming years, we do not predict its status as Asia's top financial city to change. At the same time, our positive outlook for the SAR is not meant to discount recent indications of meaningful change in the Chinese market.

We see the most notable of such developments being the US State Department's recent indictment of Chinese officials over allegations of Intellectual Property Rights (IPR) infringement. While a largely symbolic gesture, it remains a stark reminder of China's lack of satisfactory progress in improving IPR. That said, we don't believe that recently increased tension in Sino-US trade relations actually put Hong Kong's lucrative role as a Chinese trade intermediary in serious jeopardy of diminishing to a significant extent in the near future.

The most telling indication of how Hong Kong's economy will progress is, unsurprisingly, news about China's. A growing consensus among macro-economists is that in the next few years, China will reach the long-awaited benchmark of becoming the world's largest economy by GDP. It's clear that China's shift from being considered "the factory of the world" to becoming its largest consumer market will not only define Hong Kong's future success, but also the global economy's as a whole.

It's our belief that Hong Kong will indeed retain its role as an intermediary between China and the West, at least until the territory's planned integration to the PRC is complete in 2047, allowing it to continue to be an economic hot-spot in East Asia and one of the most competitive cities in the world.

Sylvain Demortier and Douglas Adair are research analysts at Tractus Asia Ltd. Herminio Andres is senior manager at the same firm. Contact them at tractus@tractus-asia.com.