Life in the Fast Lane

Malaysia is now the go-to market for automobile manufacturing in Southeast Asia.
Global investors in this key sector explain why. 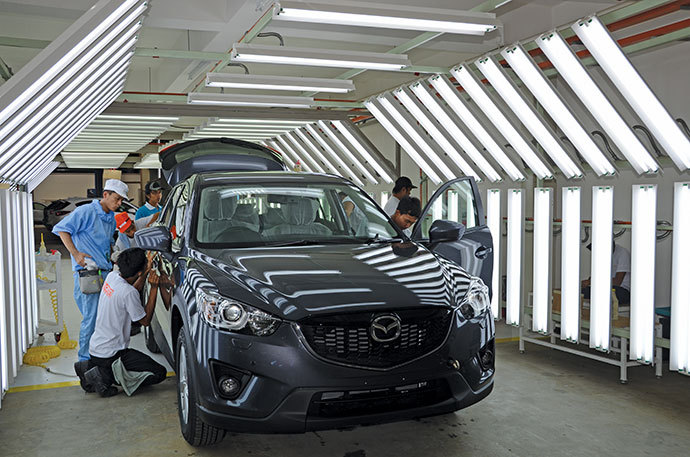 hy are global automotive players, including BMW, Mercedes Benz, Mazda, Toyota and others, expanding their Malaysia operations so dramatically? And why are components manufacturers racing to establish operations that support them? Several factors are at work.

First, rapid economic growth and increasing purchasing power have made Malaysia the largest passenger car market in ASEAN, which is forecast to become the fifth-largest automotive market in the world by 2019. The ASEAN automotive market is expected to grow at a compound annual growth rate of 5.8 percent from 2012 to 2019. Second, broad government support of Malaysia's engineering, auxiliary and supporting industries with skills development and technological resources is adding lift to an industry sector already gaining altitude. Third, Malaysia enjoys political stability, which encourages foreign direct investment. And fourth, Malaysia is strategically located for exporting vehicles to other Southeast Asia markets with growing economies and increasing purchasing power.

To the second point, Malaysia's Ministry of International Trade and Industry (MITI) announced in January its National Automotive Policy (NAP) 2014, outlining the government's plans to support local automotive players as the industry sector expands. NAP 2014 offers attractive tax incentives to automobile and component manufacturers in the form of customized incentives for both foreign direct investment (FDI) and domestic direct investment (DDI), such as Pioneer Status, Investment Tax Allowance, Grants for R&D and training, infrastructure facilitation and expatriate posts. The government expects 150,000 more employment opportunities to be created by 2020, with local labor set to replace 80 percent of foreign workers in the automotive manufacturing sector, which in 2013 employed 550,000.

A key goal of NAP 2014 is to make Malaysia the regional automotive hub for energy efficient vehicles (EEV), which the Malaysia Automotive Institute - a MITI agency - defines as vehicles that meet a set of defined specifications in terms of carbon emission level and fuel consumption. EEVs include fuel-efficient vehicles, hybrids, electric vehicles and alternatively fueled vehicles, such as those powered by CNG, LPG, biodiesel, ethanol, hydrogen and fuel cells. One way the government will achieve this is to open Manufacturing License applications to foreign automotive companies.

Perodua, a joint venture of UMW Corp., Daihatsu, MBM Resources and other investors, is Malaysia's second-largest automobile manufacturer. Its Myvi model was the best-selling car in Malaysia from 2006 to 2013.

"Our facility in [Selangor] Malaysia was established as a joint venture in 1993," says Takashi Shirai, General Manager, Malaysia Department, Project Division, Overseas Business Group at Daihatsu Motor Co. Ltd. "We increased in 2001 our investment in the manufacturing operations, added in 2014 a new manufacturing plant and now have decided to establish an engine manufacturing entity slated to go on stream in 2016." Why such an uptick in Malaysian facilities?

"Malaysia is one of the most important countries for us in our overseas business based on the successful experience with Perodua," he explains. "A stable political environment, potential economic growth, an expected increase in demand for automobiles and the Malaysian government's zeal for fostering the automotive industry made us choose Malaysia for our manufacturing operations in 1993." Today, he adds, "the Malaysian government and MIDA provide various support services, such as quick granting of the licenses for investing, manufacturing and doing business, work permits for foreigners and incentives to ensure successful manufacturing experiences."

Inokom, a subsidiary of Sime Darby Motors, began manufacturing light commercial vehicles and automobiles under the BMW, Hyundai, Mazda, Mini, Land Rover and other brands at a 95-acre site in Kulim, Kedah, in northern Malaysia, in 1997.

"In 2012, the company set its vision to become 'a preferred premier assembly partner for car manufacturing and assembly,'" says Mohd. Rizal Jailan, Managing Director, Inokom Corporation Sdn. Bhd. "Its workforce has grown significantly from 400 to more than 2,200 in 2014. Employee skills upgrading programs and motivation plays an important and significant role for the growth of the Inokom plant. It is one of the major employers in the northern region of Malaysia and is a beacon of hope for locals aspiring to pick up specialized technical skills in the automotive industry."

Rizal says the Kulim plant will produce 25,500 units for the domestic market and 8,900 units for the export market - mainly to Thailand, which began in 2013. The site's strategic advantages have largely to do with logistics, he explains.

"Inokom enjoys logistic efficiency since it is strategically located about 45 minutes' drive from the Penang Port," he points out. "The port is capable of handling Complete Knock Down containers, Containerised Car Carrier (CCC) as well as RORO operation for export. Also, there is a direct expressway from Penang to the Inokom site, which plays a crucial factor in assuring seamless delivery of parts and vehicle shipment. We have 50 percent of the local parts suppliers located within the northern region itself, while the remainder are from the central region of Malaysia. This has helped Inokom achieve logistical efficiency, as has partnering with local vendors to develop and improve the region's socio-economics."

Rizal says by operating in the north, which is traditionally home to agriculture-based industries, Inokom has benefited from "the unexplored local manpower supply" for its operation. "We look at this as a golden opportunity to improve the socio-economics of the local population while enriching them with the necessary automotive expertise skill sets." 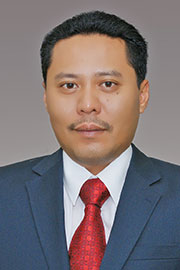 Inokom's facility in Kedah is situated within the Northern Corridor Economic Region (NCER) where there are initiatives by the government to develop the manufacturing operations in the area. One such initiative is the Local Vendors Development Programme to create clusters of vendors to further boost selected primary industries. "Good infrastructure and connectivity within the NCER keeps costs competitive. Support from specialized government bodies, especially MIDA and pro-export policies, set a positive tone for more investments and opportunities for contract manufacturing," says Rizal.

Bermaz Motor Sdn. Bhd. has been the sole distributor of Mazda Motor Corporation, Japan (MMC) vehicles in Malaysia since 2008. The goal at the time was to foster intra-ASEAN trade activity. Today, Mazda wants its vehicles manufactured in Malaysia, not just distributed there, and it is now one of the main brands manufactured at the Inokom plant.

"Mazda chose Malaysia for its business expansion as it has the necessary human capital that is well-trained in the automotive industry," says Dato' Sri Ben Yeoh, Chief Executive Officer of the Bermaz Group. "English, the second language in Malaysia, is being used efficiently in most training and communication in Malaysia, making technological and information transfer much easier. With the assistance of MIDA and the relevant Malaysian authorities, MMC has found easy access to fundamental resources in Malaysia, especially well-trained and skilled human capital, making partnerships with local vendors and securing governmental incentives and assistance possible."