Leading From the Front 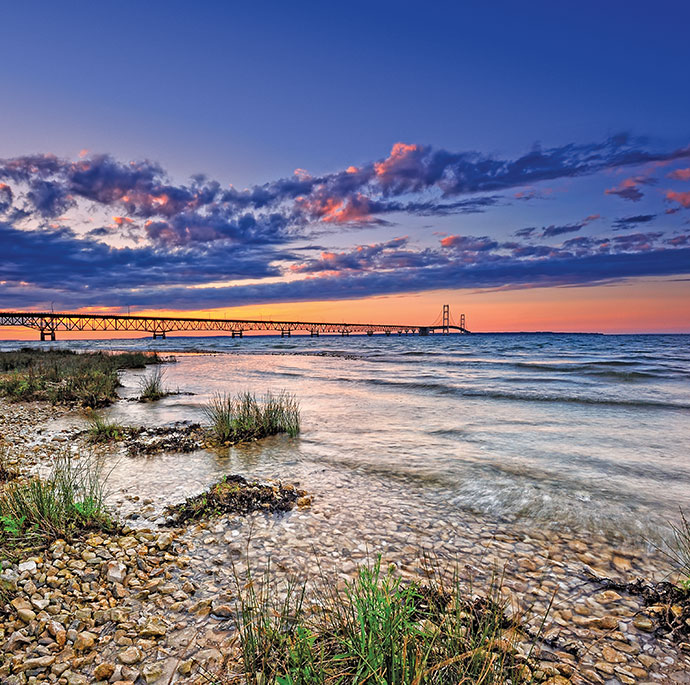 n Michigan’s ongoing comeback story, one theme comes through loud and clear: Michigan has no intention of ceding its global leadership role in the automotive industry.

Not now. Not in the future.

“We are the epicenter of the industry,” says Nigel Francis, senior automotive advisor to the governor and senior vice president of Michigan’s Automotive Industry office. “That’s been the case before but even more so now with a business environment in which it’s easier and potentially more profitable to operate. At the very highest level, Michigan has a pretty interesting value proposition.”

The Automotive Industry Office, created by Governor Rick Snyder and the Michigan Economic Development Corporation (MEDC), is evidence of the state’s emphasis on the industry. In September 2013, Governor Rick Snyder tabbed Francis, a longtime industry executive, as a point man with a simple mandate: execute a comprehensive strategic plan to drive the automotive industry forward to remain the global center while fostering sustainable growth within the industry.

“We see a great opportunity in terms of folks in Europe or Asia setting up in Michigan when they’re looking for a North American operation,” says Snyder, who recently visited Germany and Italy, both significant automotive employers in Michigan. “A lot of people don’t realize that of the top 100 North American suppliers, over 60 have their headquarters in Michigan. We have 375 R&D centers for the automotive industry that account for 70 percent of all the R&D in the country. That’s going on right here in Michigan, about $12 billion in investment, and when you have investments like that, I think it’s worth having an office with a top flight person leading it.” 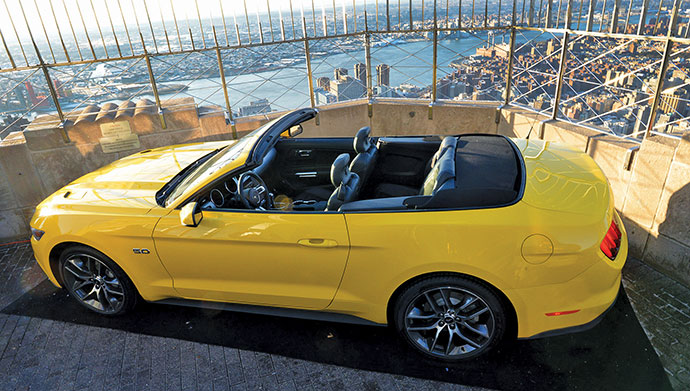 Michigan is uniquely equipped to meet the workforce needs of the automotive sector. Auto-specific programs are offered at 91 colleges, universities, community colleges and vocational schools throughout the state and Michigan has 650 automotive programs offered at the post-secondary level, many of them nationally ranked. The University of Michigan offers one of only two Ph.D. programs in automotive engineering, nationally.

A 2013 study of US motor vehicle parts suppliers by the Motor & Equipment Manufacturers Association (MEMA) in collaboration with IHS Inc., found that Michigan accounts for over 102,000 direct jobs in the automotive supply sector.

“As many developed countries have recognized, including our own, there are issues of talent in the human supply chain today and for the future,” says Glenn Stevens, vice president of MichAUTO, an economic development initiative of the Detroit Regional Chamber. MichAUTO serves as the collective voice of the automotive sector, promoting and growing the industry in Michigan. The organization is drilling deep through the educational strata.

“We’re addressing the need for everything from engineering and skilled trades to the shop floor operational people, which is very complex, requiring computer skills, design and CAD skills,” Stevens says. “We work with partners in engineering schools and community colleges, high schools and technical schools, even with the SAE Foundation with 4th and 5th graders in the STEM fields. We’re doing what we can to make sure we have the people these companies need to fuel their growth.”

“This (lab) is intended to give an idea of what it’s like to work in a modern day factory operating CNC equipment,” says Mike Finney, president and CEO of MEDC. “We’re taking steps to market the industry and opportunities that are there. Not only do we talk about how cool the equipment is and becoming a programmer, but we talk about the compensation, which happens to be in the $50,000 to $80,000 range for really good people. We’re promoting that.”

High school students statewide, as well as Governor Snyder, have enthusiastically embraced the FIRST Robotics Competition, a national competition featuring teams of 25 or more students tasked with building and programming robots. Two Michigan teams, one from Bloomfield Hills International Academy, the other from Holland/Black River, were partners on the winning alliance team at the 2014 FIRST Competition Championships. Michigan leads the nation for participants in the competition, which aims to inspire students to pursue STEM careers.

In 2013, the state created the Michigan Advanced Technician Training Program (MAT2), a three-year, industry-driven approach to creating talent in the education sector. MAT2 offers employer-paid tuition and on-the-job training with pay, and is open to graduating high school seniors or students currently enrolled in community colleges or four-year universities. At program’s end, students not only earn their advanced associate degree but a full-time technician job as well.

Job seekers can check out the Pure Michigan Talent Connector found at mitalent.org, a database that not only lists job openings but provides tools to help with planning and guidance, especially around high demand careers. “We’re trying to be more than just a job board,” says Finney. “We want people to understand where there are long-term career opportunities.”

And the MEDC put a new twist on the classic job fair at Dream Job, held June 13 at Detroit’s Ford Field. “The idea behind it is to have pre-qualified candidates already screened by us and by the companies potentially interested in them so that when we bring them together, these are real discussions which should lead to a more robust placement process than what typically happens,” says Finney. Dream Job attracted students from all over the country; over half the 125 companies involved were automotive-related.

The Center for Automotive Research says Michigan is top in automotive research, and the numbers speak for themselves. Michigan is home to more than 370 auto industry related R&D and technical centers. Over 70,000 R&D professionals work in the state and 25 percent of automotive patents come out of Michigan. Recognizing the need to maintain its global leadership, universities and manufacturers continue to invest in high-tech research in everything from design to manufacturing to fuel efficiencies. Public-private partnerships are leading the way to some of the industry’s most exciting projects.

“A perfect example of that is the University of Michigan’s Mobility Transformation Center [MTC], a 32-acre, public-private-funded research facility for future vehicle development for the connected and autonomous vehicle,” says Stevens. “What we do is as much about tomorrow’s vehicle development as it is today’s.” Partners include the university, the MEDC, industry partners Bosch, Econolite, Ford, General Motors, Toyota and Xerox, and Michigan’s Department of Transportation.

The MTC broke ground on the Ann Arbor campus in May 2014. The $6.5-million center aims to develop commercially viable Intelligent Transportation Systems, automated vehicles that communicate wirelessly with each other and with infrastructure. The test site will simulate an active urban setting with three miles of roads with intersections, traffic signals, crosswalks, roundabouts and obstacles. The facility should be complete in fall 2014.

Mahindra USA is developing the Mahindra North American Technical Center, Inc., in Troy, Mich., investing close to $2 million and creating up to 112 jobs, including 40 engineering jobs. The center will design, develop and prototype complete vehicle designs facilitating Mahindra & Mahindra’s expansion into global automotive markets. Mahindra is also investing $2 million in the company’s GenZe facility in Ann Arbor, creating 34 jobs related to manufacturing an electric scooter, the only two-wheeled vehicle of its kind in the US. 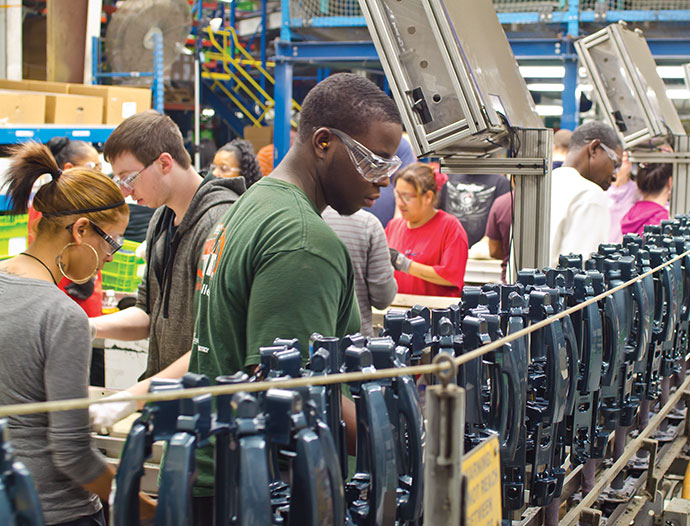 “Michigan provided us the perfect ecosystem to step up our US presence,” said Anand Mahindra, the company’s chairman. “We were able to draw on the terrific automotive engineering and manufacturing talent available in the state, to create industry leading initiatives for the US.”

With strong sales and continued investment on the part of automotive OEMs, suppliers are also choosing to locate or expand operations in Michigan. Examples include: 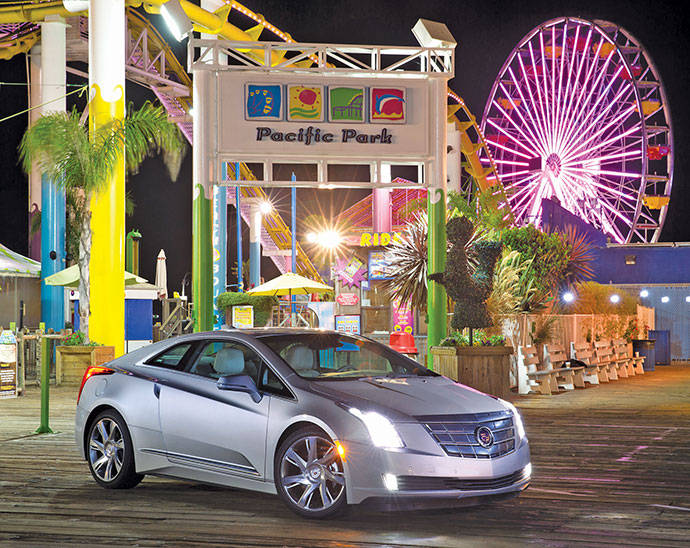 Hungerford is grateful for what he views as a renewed appreciation of what the automotive industry means to the state. “Even though they were always supportive, it continues to increase through their words and actions,” he adds. “The MEDC helps new companies establish here in west Michigan and throughout the state, but also helps retain companies that exist here.”

“I’ve never seen such a spirit of collaboration in the industry across the state that we have now,” he says. “We’re fortunate to have a governor, a leadership team, an economic development agency (MEDC) that has really focused on the ‘gardening’ aspect of this industry. They make sure that they are tending to the companies that have made the investment and are already located here. We show Michigan is a place for people to come and do business. We have all the assets of the cluster, but when you roll in the quality of life and the natural resources here, it’s a unique place.”

That quality of life is Michigan’s ace in the hole. A low cost of living, excellent education, interesting cities and varied, natural beauty make it an easy place for companies to attract top talent.

“I was born on the other side of the world,” says Francis, British by birth. “I chose to come here because I’m an automotive engineer by profession. When I got here I found that not only was I in the center of my profession but in a wonderful place to live and work. The work-life balance has become more and more important. Michigan appeals to people who are looking for that.”

This Investment Profile was prepared under the auspices of the Michigan Economic Development Corp.
For more information, contact the MEDC at 888-522-0103. On the Web, go to www.michiganbusiness.org.