The Bayou State adds firepower to its growing arsenal of business climate and economic development competitiveness. 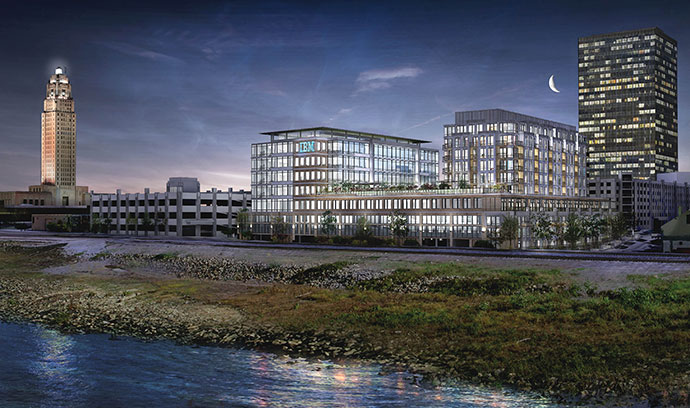 A rendering of the IBM Services Center: Baton Rouge, currently under construction, with the Louisiana State Capitol on the left. The Center is part of a mixed-use, riverfront development.
Image courtesy of Baton Rouge Area Foundation
by MARK AREND
T

he Enterprising States 2014 report, issued in June by the US Chamber of Commerce, adds evidence to the case Louisiana is making lately that it's increasingly hard to beat in rankings of economic performance, business climate and job creation. The report ranks Louisiana first in export intensity - the dollar value of exports as a percentage of gross state product - and first in export growth. It ranks second in export intensity growth and growth in the state's share of national exports. And it ranks second for per capita income growth, where it has ranked in the upper tier of states for each of the past five years.

Gov. Bobby Jindal said the report "validates the hard work we have been doing in Louisiana to raise economic performance; keep taxes in check; boost business, technology and trade opportunities; and improve our education system."

Louisiana Economic Development notes in a press release that Enterprising States 2014 singles out Louisiana's leadership in industrial growth, citing the multibillion dollar Sasol Ltd. and Nucor Steel projects (2011 and 2010 Site Selection Top Deals respectively) and its attention to technical and vocational education as the state experiences a surge in demand for industrial construction and manufacturing jobs.

Meanwhile, Louisiana capital Baton Rouge will experience a surge of 800 new jobs once IBM opens its new technology center, the IBM Services Center: Baton Rouge, which was announced in March 2013; it's a Site Selection Top Deal for 2013. Construction of the center is under way. 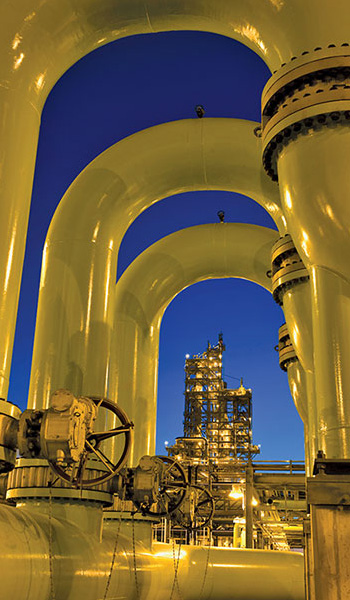 A central element of the public-private partnership involved in securing the IBM center is the construction of a mixed-use, riverfront complex that will be developed by Commercial Properties Realty Trust (CPRT), a real estate investment trust that manages and develops property holdings of the Baton Rouge Area Foundation (BRAF). Inspired by New Urbanism design principles, the complex will include an office building that will house the new IBM Services Center, as well as a separate, 11-story residential building with 95 river-view apartments and nine separate town homes.

Largest Refinery in the State to Expand

Louisiana was energy intense before it was export intense. And it's about to chalk up another refinery project - this one an upgrade to Marathon Petroleum's Garyville refinery that represents upwards of $2.5 billion in investment and 65 new jobs averaging $115,000 per year. Marathon filed permit applications in April and plans to make a final decision on the project by early 2015. If approved, the project would result in hydrotreating, hydrocracking and desulfurization equipment installations, along with additional infrastructure that would include buildings, tanks, cooling towers and rail and electrical facilities.

Garyville is already the largest refinery in Louisiana and the third-largest in the US. Louisiana Economic Development estimates the project would result in an additional 304 new indirect jobs, for a total of more than 360 new jobs. Among those jobs would be 35 new contractor employees at the refinery. In addition, the company estimates development of the project would result in 3,000 new construction jobs during the multiyear construction phase. The new jobs would be in addition to the refinery's existing workforce of 800 Marathon Petroleum employees and 650 contract workers.

Described by Marathon Petroleum as a Residual Oil Upgrade Expansion, or ROUX, the capital investment would enable the company to convert a byproduct of the refining process - heavy residual oil - into approximately 1.2 million gallons per day of ultra low-sulfur diesel at Garyville. The ROUX project would follow Marathon Petroleum's $3.9 billion refinery expansion in Garyville, which represented one of the largest manufacturing projects in Louisiana history upon its completion in late 2009. Since that time, the Garyville refinery has more than doubled its refining capacity.

Should Marathon Petroleum move forward with the project, LED would offer a customized incentive package to the company, including a performance-based Modernization Tax Credit of $3 million, along with the services of LED FastStart®, the state's workforce training program. In addition, the company would utilize the state's Quality Jobs and Industrial Tax Exemption programs.