How Does Your Garden State Grow? 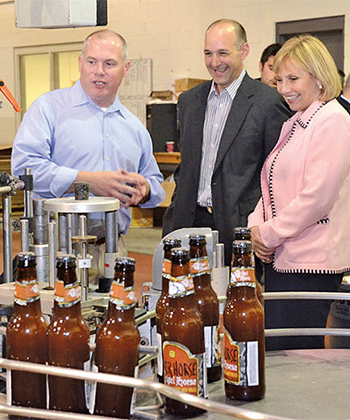 hat would cause Forbes Media, a company with a 96-year history in New York City, to pull up stakes and cross the Hudson River to Jersey City, N.J.? How about lower rent, a more favorable tax climate, streamlined business regulations and a 10-year, $27-million tax incentive in exchange for bringing at least 350 new jobs to the state? Or why would an NBA team representing a Pennsylvania team, the Philadelphia 76ers, decide to move their headquarters and practice facility to Camden, N.J.? Could it have been the $82-million tax break over 10 years? Yeah, that's the ticket.

"The fact is that operating costs are pretty much a wash when you are comparing New York, New Jersey and eastern Pennsylvania," says John H. Boyd, site selection professional and principal with Princeton-based firm The Boyd Group, Inc. "What distinguishes states in this region are incentives. They are the new battleground for economic development, especially here in the Northeast."

In 2013, Governor Chris Christie signed the Economic Opportunity Act, giving his state what it needed to wage the economic development battle more effectively. Under this act, New Jersey's incentive programs were re-tooled and consolidated into the Grow New Jersey Assistance Program (Grow NJ), offering base tax credits ranging from $500 to $5,000 per job per year, with bonus credits ranging from $250 to $3,000 per job per year, provided the project meets certain requirements, such as location in an urban area or high employment levels. Maximum awards can reach as high as $300 million over 10 years.

"The enhanced Grow NJ program is certainly turning heads," says Lt. Governor Kim Guadagno. "In fact, in just a few short months since the program began, some of the biggest names in business have made the New Jersey decision, including Forbes Media, VF Sportswear and JPMorgan Chase. There has never been a better time to choose New Jersey."

Boyd agrees. "In our view, New Jersey is crafting very effective, versatile incentives," he says, "both in what kinds of companies can benefit and in terms of geography." Historically, northern New Jersey has been the engine of growth for the state, especially the region closest to the New York metropolitan area, Newark, Bergen County and the Port of Elizabeth. But that could quickly change.

"This new incentive program will put southern and central New Jersey on a level playing field with the rest of the state," Boyd adds. "From a site selection standpoint, southern New Jersey is an area that has significantly lower operating cost structures than northern New Jersey or Pennsylvania. It's ripe for development."

Aerospace firms aren't new to New Jersey; Lockheed Martin employs thousands in the southern portion of the state. But aerospace and technology companies, in particular, are keeping a close eye on New Jersey after it was named one of six states selected as unmanned aircraft system (UAS) test sites, due in part to the presence of the Federal Aviation Administration's William J. Hughes Technical Center, in Egg Harbor Township, and Rutgers University, a member of the Mid-Atlantic Aviation Partnership (MAAP). An economic impact report from the Association of Unmanned Vehicle Systems International (AUVSI) says that in the first three years of UAS integration, more than 70,000 jobs will be created in the US with a financial impact of more than 13.6 billion.

"The enhanced Grow NJ program is certainly turning heads. In fact, in just a few short months since the program began, some of the biggest names in business have made the New Jersey decision …"

Some of those jobs will likely result from the New Jersey Economic Development Authority's (EDA) Angel Investor Tax Credit Program introduced in July 2013 to encourage a mix of manufacturing and technology companies to remain and expand in New Jersey. The program offers credits against New Jersey corporation business or gross income tax for 10 percent of a qualified investment in an emerging technology business with a physical presence in the state that conducts research, manufacturing, or technology commercialization.

Though tax incentives have their detractors, the state says both the Grow NJ and Angel Investor Tax Credit programs have helped New Jersey compete for projects that both created and saved jobs. "Since the EDA began accepting applications under the enhanced Grow NJ program last November, 31 projects have been approved to receive tax credits tied to the creation of nearly 5,170 new jobs and the retention of more than 6,885 'at-risk' jobs," says Guadagno.

Boyd calls such incentives a "necessary evil" for the state, but says they help New Jersey offset higher operating costs than states competing for projects or trying to lure companies away. He gives New Jersey credit for creativity.

"These incentives are being re-crafted in a very smart way," he adds. "This consolidation of five programs into one is making the state very nimble, and offers additional resources to attract trophy projects that have been going elsewhere."