Tennessee acts on a blueprint for future success in its automotive sector.

ennessee is serious about keeping its automotive industry competitive today and in the future, particularly in the wake of the global recession, the effects of which linger in mid-2014, and industry-specific challenges in the Volunteer State, nationally and globally. It's one of two states that agreed to work with The Brookings Institution to analyze a key sector in deep detail and formulate a blueprint for the future (Colorado and aerospace is the other). The result is "Drive! Moving Tennessee's Automotive Sector Up the Value Chain," released in 2013.

The upshot is a 100-plus-page document that makes three important recommendations to Tennessee and its business recruiters working with automotive prospects: (1) Tennessee must deepen its sector supply chain; (2) it must improve workforce training; and (3) it must commit to innovation rather than just to being a low-cost location. 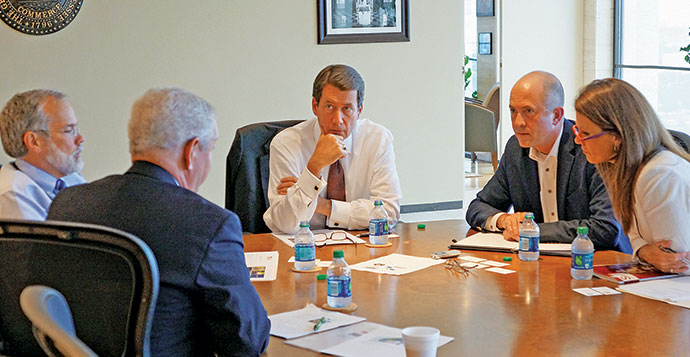 In early June, Site Selection convened a panel of experts on these very issues at the offices of the Tennessee Department of Economic and Community Development (ECD) in Nashville. Participants were ECD Commissioner William Hagerty; Chancellor John Morgan of the Tennessee Board of Regents; Tom Rogers, Director, Industrial Partnerships and Economic Development at Oak Ridge National Laboratory; and Kim Ketchum, Corporate Director, Business Development, USA, at Magneti Marelli, a Tier 1 supplier of shock absorbers and automotive lighting in Pulaski, Tenn.

Following are excerpts of that discussion.

Site Selection: What was the state of the automotive industry in Tennessee at the time the Drive! analysis was getting under way?

Commissioner Hagerty: It was the same challenge facing every state. We were coming out of a deep recession, it was a tough time for industry in general, and the auto industry had been punished more severely than most. A lot of transformational issues had to happen with their pension funds and structural issues with the industry. We also had an unusual dynamic in the state in that the earthquake and tsunami that occurred in Japan had a big impact on what happened here. The Toyota suppliers, including Denso, are adversely affected in a way that Nissan was positively affected, because Nissan reversed its supply chain. Tennessee companies were back-filling the supply chain in Japan. So we had two macroeconomic events - the recession and the disruption to the supply chain. The natural disaster in many ways was a jumpstart to the companies present here.

Another big factor was the Fed. Automotive is a big-ticket item that tends to get financed. With the Fed having its pedal to the mat, and easy money available, this translates into a real wind at the back of the automotive sector. This has been quite significant. Our goal was to get positioned to capture the momentum to drive Tennessee's share disproportionately higher as we were coming out of the recession, and addressing the needs of the industry as a result of Fukushima.

SS: How is the state responding to this industry's call for a plentiful, skilled workforce?

Chancellor Morgan: Tennessee, since the latter years of the last administration, has been focused on improving our educational attainment and delivery. In 2010, we adopted the First to the Top Act, which set us up to compete successfully for the Race to the Top funding, and also the Tennessee Complete College Act of 2010, all of which was to designed to try to align our educational enterprise, particularly post-secondary, with the state's development needs. That had never been done before. Governor [Bill] Haslam agreed that was the right thing to do, but it's really critical that as we focus on increasing education attainment, we increase it in the right places. That lead this administration to build on what had been done, to accelerate our efforts around workforce development, making sure that our linkages are sound between our higher education systems - the University of Tennessee System and the Tennessee Board of Regents and its six universities, 13 community colleges and 27 colleges of applied technology - and the private sector. As for the latter, we are focusing much more now on the needs of the economy and the specific workforce development activities that are required. This means not just degrees and credentials as we Drive to 55 [a state program to increase the number of Tennesseeans with a college degree or credential to 55 percent by 2025], but driving toward 55 percent of the workforce having the right credentials to meet the needs of business and industry.

One program that takes effect July 1 builds on a model we used in middle Tennessee involving skills panels, where representatives from our institutions will meet in a much more significant way with the manufacturing, IT and healthcare industries - our three focus areas right now - looking at regional workforce needs. We're not going to solve the regional workforce problems one school at a time. It needs to be much more comprehensive and collaborative. We are very much about addressing that in a systemic way rather than from location to location.

SS: What was the private sector's take on this? Were automotive companies concerned about their ability to compete from Tennessee?

Kim Ketchum: As a global company, we will always quote from our facility in China, the one in Mexico and the facility here in Tennessee. When investing a lot of money in a site, you want to make sure you can keep your capacity there. We have taken a look at overall costs, and logistics is huge. Tennessee is doing a great job in that respect in terms of infrastructure so we can continue to be competitive. Our labor rates will be a little higher, but if we can do some other things that make us competitive, that's what we're doing. All of our five- and 10-year plans have us doing business in Tennessee.

"All of our five- and 10-year plans have us doing business in Tennessee."

Tom Rogers: That's right, it's more common in southeast Michigan and internationally. At Oak Ridge, we have signature strengths, including neutron science and our $1.6 billion Spallation Neutron Source. Using that, you can really analyze welds for stress effects, for example, and find out what's going on. Companies want to know more and more about the materials they're working with. We're also probably the world's center for high-performance computing, which can be used for analyzing aerodynamics. We've done this with both cars and trucks recently to improve fuel efficiency.

Magna, a supplier not far from Oak Ridge, asked us to compare stamped holes to laser-cut holes, because they could save time and money if the end result was the same. Their customer was concerned that stamping the holes would compromise the product. We could demonstrate that they were the same, and the company was able to not order 10 $1.6-million laser-cutting machines.

Quite recently, the governor has invested $2.5 million to be made available to the laboratory to work with Tennessee manufacturers in examples like this. So we're getting more active in the Tennessee Automotive Manufacturers Association, so we can get manufacturers to better understand the capabilities that we have. We'll move as quickly as possible to turn projects around with the 10-year goal being the Magneti Marellis of the world saying they don't need to go overseas to get that R&D done. We can get that done down the street.

Kim Ketchum: We have invested so much in our R&D, and as a global company we have quite a bit of R&D. I'm not saying we as a Tier 1 supplier won't benefit from that. We will. But it will be a huge benefit for Tier 2 suppliers, which we're seeing pop up all around us. And that's what we want. We want our component manufacturers to be next door to us. I see this becoming very popular. Weld strength testing, like Tom mentioned - we would use that, same for the aerodynamics. This is a great benefit to the Tier 2 suppliers and will help make us a more superior producer of our products.