vigorous, modern economic system requires a thriving marketplace. It also requires researchers who are committed to advancing knowledge, knowledge that in turn furthers innovation, yielding both new approaches to old problems, and new products and services for the economy — often both at once.

A small laboratory at the Arkansas Research and Technology Park, in Fayetteville, has been manipulating the dreaded E. coli strain of bacteria to effectively neutralize it, so that it will no longer pose a threat. So useful is this lifesaving project, says the scientist overseeing it, that it has been fast-tracked, a textbook case of science and technology making immediate, important, and meaningful contributions to daily life.

That laboratory is one of the constituent parts of the hundreds of university-related research parks worldwide, whose flagship organization is the Association of University Research Parks. Notes the National Research Council, “Research parks are seen increasingly around the world as a means to create dynamic clusters that accelerate economic growth and international competitiveness.” 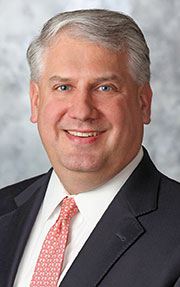 Kevin Byrne, president of the Association of University Research Parks

The NRC goes on to note that university research parks are a proven tool for creating cutting-edge high-tech companies, to say nothing of thousands of new jobs. They are hubs of what the Brookings Institution, in a 2014 report, has called “innovation districts,” defined as “geographic areas where leading-edge anchor institutions and companies cluster and connect with start-ups, business incubators, and accelerators.” These innovation districts are popping up all over the country — and in forward-looking cities around the world, from Seoul to Berlin to Toronto.

University research parks are not only global in their scope, but are also highly specialized and localized. They provide a solution to a problem in the marketplace: They are a “third place” where the triple helix of industry, academia, and government can comfortably meet. Harnessing investments in research and education and promoting university, industry and government collaboration, university research parks are communities of innovation, in short, and are thus powerful economic engines within their home communities — and far beyond them.

The local aspect is vitally important. A university or industry research scientist in, say, Dallas will be in communication with fellow scientists all over the world, reading their papers, exchanging emails, attending conferences with them. Yet, he or she is most likely to exchange ideas informally — to bounce thoughts and send up test balloons — with a colleague next door, face to face. Providing the setting where just the right people are put into contact with one another, helping them communicate and develop their ideas, and assisting them in bringing their ideas to reality and their discoveries to market, where they will create high-wage employment and prosperity — all these are the brief of the university research park.

Because innovators are often working along similar lines or in related fields, research parks offer a site for the development of industry clusters. Like attracts like, and the presence of strong research firms and laboratories draws similar concerns, creating “industrial commons” of companies that work in the same sectors of the economy.

The greater Chicago area, for example, has emerged as an international center of nanotechnology, medical diagnostics, pharmaceutical design and manufacture, and related life-sciences fields, drawing on leading schools such as Northwestern University, the University of Chicago, and the Illinois Institute of Technology. Downstate, the University of Illinois Research Park, located in Urbana-Champaign, has nurtured more than two dozen startups that center on computer technology, from semiconductor manufacturers to companies such as Netflix and PayPal.

Similarly, the corridor formed by the Texas cities of Austin, San Marcos and San Antonio has recently emerged as a nationally important technology center. At Texas State University’s Science, Technology and Advanced Research (STAR) Park, a UK-based company has developed semiconductor material that allows for the affordable conversion of heat waste to energy. Numerous other partners and investors are joining them from elsewhere in Europe, blending the local and the global under a single roof, so to speak — and bringing so much European traffic to the area that British Airways now offers direct nonstop flights between Austin and London Heathrow.

Notes a 2012 survey of North American university research parks prepared by the Battelle Technology Partnership Practice, these “third places” are increasingly evolving as “live-work-play” environments, particularly in urban centers. Engines of renewal, they host not just laboratory spaces and offices, but also restaurants, retail shops, theaters and other amenities that emphasize that these places truly are communities.

During the recent recession, the overall economy lost nearly 5 percent of its jobs. In contrast, companies at university research parks, the Battelle report notes, showed an average gain of 27 percent, an example of just how important research parks can be to local economies. Today, university research parks directly employ about half a million people, with ripple effects that account for easily twice as many more jobs throughout the country. The University of Wisconsin Madison Research Park, for example, houses more than 125 companies and accounts for more than 4,000 employees holding high-paying jobs that simply did not exist before the park was founded in 1989. Each year, spinoff companies and new jobs are added to the mix, making the Madison example one of many success stories made possible by the communities of innovation.

The recession was not without its consequences, however. Some university research parks experienced drop-offs in capital investment as universities experienced a decline in federally funded research and development.

Thanks to realization of the importance of innovation to local and regional economies, many university research parks have found solid support from municipal and state governments. The State of Connecticut, for one, has pledged $2 billion for the “Next Generation Connecticut” initiative to expand education and research in materials science, physics, biology, engineering, cognitive science, genomics and related disciplines. 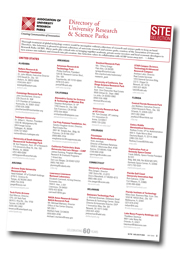 Similarly, the Commonwealth of Kentucky has developed a mix of direct funding, tax allowances and other investment incentives. Notes George Ward, executive director of the Coldstream Research Campus at the University of Kentucky, “Working with central Kentucky’s technology-based economic development professionals, I see firsthand on a daily basis how the investment in research has changed Lexington’s business mix, tax base and our community.” The University’s high-tech business incubator, the Advanced Science and Technology Commercialization Center, has created dozens of high-tech companies that typically emerge through the help of federal research funds — more than $28 million since 2007, with an additional $18 million from the Commonwealth’s matching-grants program. Much of that money is spent in the community in the form of salaries, rents, and the like.

Wherever university research, science and technology parks are set, whatever their size and their areas of expertise, all will be places where discoveries happen and where the economy of tomorrow is born. Throughout the United States, those parks are flourishing, offering opportunities for investment and growth. The challenges are many, but the rewards are great.

Kevin Byrne is president of the Association of University Research Parks (www.aurp.net).