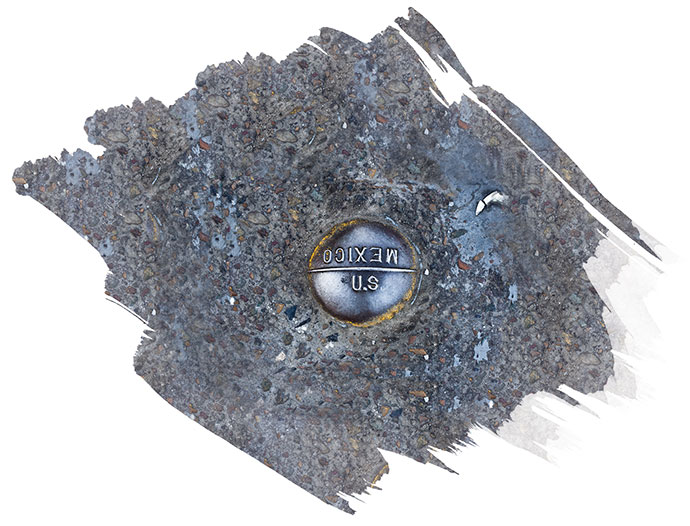 The line of demarcation on the US-Mexico border at San Ysidro, Calif.
Photo by Josh Denmark courtesy of CBP
by Rick Van Schoik, Erik Lee & Christopher Wilson
A

s the United States and Mexico focus on a number of key bilateral and domestic economic efforts, the US-Mexico border region's economy finds itself at a time of potentially enormous transition. New local initiatives have been developed in recent years across the border region - from Cali-Baja in Tijuana and San Diego to the Binational Economic Development Zone project in Brownsville and Matamoros - to promote border communities as unified and interdependent economic regions. The border states, too, have pushed forward in cooperative efforts, leading the drive to create a series of Border Master Plans to prioritize border infrastructure investments.

Equally important are developments since 2006 at the global and federal levels. Significant progress has been made on issues of bilateral security cooperation, opening a space for new items on the agenda. At the same time, the financial crisis and recession of 2008-2009 reminded us all that economic security is of primary concern, along with national and public security concerns.

Since the election of Enrique Peña Nieto in 2012, issues of economic cooperation now sit atop the bilateral agenda. The launching of the US-Mexico High Level Economic Dialogue (HLED) has begun to accelerate bilateral progress on issues of trade facilitation, regional transportation planning, energy cooperation, educational exchange, and cooperation in the negotiation of regional trade agreements, most notably the Trans-Pacific Partnership (TPP), which has the potential to update NAFTA. In addition, the impact of the Transatlantic Trade and Investment Partnership (TTIP) offers significant opportunities for the entire region, but it also offers challenges to the region by potentially eroding the special preferences NAFTA guaranteed for its neighbors and presenting issues of the US and Mexico's co-manufactured products' access to Europe.

"Nine of the 10 US and Mexican border state capitals are located at a distance from the border, which presents a political challenge for border communities."

At the same time, Mexico has undertaken a series of economic reform efforts, with the goal of strengthening competition in energy markets, the educational system and access to financing. This confluence of factors creates a window of opportunity for the border region, which is the natural location to begin many of the binational projects being conceived of through the HLED process.

Although all four regions are located at a great distance from the national capitals, they feel changes in national policies acutely. Examples include Mexico's Border Industrialization Program (the Maquiladora Program) of the 1960s, the North American Free Trade Agreement of 1994, and the post-9/11 security buildup by the United States coupled with increased border wait times. All four regions are vital nodes along major trade corridors. Nine of the ten US and Mexican border state capitals are located at a distance from the border, which presents a political challenge for border communities. Lastly, all four regions have historically important cross-border economic relationships, based on proximity, comparative advantage, and longstanding familial and cultural ties.

The San Diego/Tijuana region is notable for its sheer size, with a population approaching 5 million inhabitants in the binational region; the massive, high-value-added advanced manufacturing complex that features specific industrial sectors such as medical devices; some of the largest and busiest ports of entry in the world; and innovative new ports of entry that feature a public/public partnership (Otay Mesa East) and a remarkable binational airport terminal. The region also boasts levels of wealth and human capital that are relatively high, particularly for the border region.

The Arizona-Sonora region, on the other hand, is notable for its smaller Arizona border cities that abut Mexican cities that are much larger. In addition, the port of Nogales-Mariposa is notable for the enormous importance of winter fruit and vegetable imports into the United States. The region has an unusually long and highly institutionalized state-to-state relationship, thanks to the Arizona-Mexico Commission/Comisión Sonora-Arizona.

The region comprising El Paso, Texas; Ciudad Juárez, Chihuahua; and Las Cruces/Santa Teresa, N.M. (also known as the Paso del Norte region) is noteworthy for its enormous size and a strong legacy and cluster of manufacturers. With the metro-area population growing quickly to the west across the Texas-New Mexico state line, the New Mexico-Chihuahua relationship, institutionalized in the New Mexico-Chihuahua Commission, is growing in strength and importance. 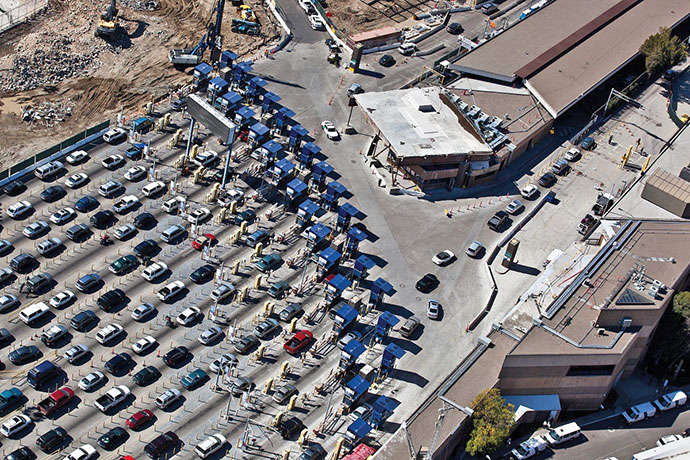 While El Paso and Juarez move forward, other crossings languish. Above is the US Customs and Border Protection inspection station at what is thought to be the busiest land port crossing in the world at San Ysidro, Calif. Some of the congestion soon may be relieved by Otay-Tijuana Venture, a real estate development team headed by Chicago real estate executive Sam Zell that is moving forward with a new private port of entry and US Customs inspection facility connecting the San Diego area and A.L. Rodriguez International Airport in Tijuana with a pedestrian bridge.
Photo by Josh Denmark courtesy of CBP

Thanks to a new, five-year pilot program from US Customs and Border Protection (CBP), the time it takes to cross the border at two bridges spanning the Rio Grande at El Paso, Texas, and Ciudad Juarez, Mexico, has decreased considerably. That's good news for folks on both sides of the border.

In 2013, there were 22 million pedestrian and automobile crossings between El Paso and Juarez. Two-hour wait times were common. "These are people visiting family, going to school or work, doing their shopping," says US Congressmen Beto O'Rourke. "More than $90 billion in US/Mexico trade crossed our bridges last year. All this activity supports one out of every four jobs in El Paso."

The solution to the decades-long problem was addressed on several fronts. Legislatively, O'Rourke co-sponsored the Consolidated and Further Continuing Appropriations Act. It includes Section 506, allowing the CBP to enter into public-private partnerships with local entities to help fund overtime pay to customs officers at ports of entry, including international bridges. El Paso was one of five cities selected to participate in the pilot program.

On the local level, the city and CBP identified the bridges receiving additional officers, Paso Del Norte and Ysleta Zaragoza. They analyzed bridge-crossing data, looking at peak traffic times at pedestrian, vehicular and cargo lanes to identify where to invest in extra border inspection agents. The city council authorized increasing bridge tolls by 50 cents to raise the $1.5 million, annually, necessary to fund the officers.

The agreement was signed and put into action in January 2014. Monthly reports from CBP show that while the volume of all types of traffic has risen 24 percent, wait times have decreased from the same time last year. - Patty Rasmussen

The South Texas-Tamaulipas-Nuevo León area has at least three separate important economic engines. First, Laredo/Nuevo Laredo is the busiest commercial port of entry on the US-Mexico border, serving as the gateway for the Midwest and eastern United States' trade with Mexico. Further south in the Rio Grande Valley are numerous medium-sized sister-city pairs with important manufacturing industries. Recently, the boom in shale gas and oil production from the Eagle Ford formation has propelled growth in South Texas. With Mexico's recently passed energy reform, there is much speculation that something similar could happen on the Mexican side of the formation.

The US-Mexico border economy thus finds itself in a period of significant transition. In order to continue to enhance the competitive position of the border region and the economic well-being of its inhabitants, policymakers and stakeholders at the local, state, and federal levels will need to better understand how the US-Mexico border can better adapt to global realities and strengthen its role as an engine for the growth of the regional economy. These same actors also will need to work together to build more durable regional political coalitions that can set the table for future prosperity.

The U.S.-Mexico Regional Economic Competitiveness Forums will take place in San Diego, Nogales, El Paso, and South Texas during the spring and summer of 2014. A full report will be launched in Washington, DC, during the summer of 2014. Christopher Wilson is Associate at the Mexico Institute of the Woodrow Wilson International Center for Scholars. Rick Van Schoik is the Portfolio Director, Energy and Environment of the North American Research Partnership. Erik Lee is Executive Director of the North American Research Partnership. NARP research analyst Ruth Soberanes also contributed to this overview.