The One That Didn’t Get Away

A blue-chip ag-business headquarters will remain in Illinois.

t’s not a one-way street entirely, but it seems more companies relocate their headquarters out of Illinois than into Illinois. Office Depot Inc. announced in December it’s leaving Naperville for Boca Raton, Fla., to name one recent example.

The Land of Lincoln nearly lost another the same month. Decatur-based Archer Daniels Midland (ADM) had announced in September 2013 that it was exploring location options for a new global headquarters and customer center.

“Our company is growing and becoming more global and more customer-centric,” said Patricia Woertz, ADM chairman and CEO, at the time. “To continue to succeed, we need a global center in a location that allows us to travel and work efficiently with customers and employees throughout the world. We also need an environment where we can attract and retain employees with diverse skills, and where family members can find ample career opportunities.”

It planned to locate a small, corporate team at the global center, with approximately 100 jobs relocated to the center. In addition, the company planned to create a new IT tech center at the same location, adding approximately 100 new positions there over the next few years.

“As we look to establish the new global center, we remain firmly committed to the 4,400 colleagues who will continue to work in Decatur, and to the economic strength and viability of the Decatur community,” Woertz said. Decatur was to be designated the North American headquarters. ADM also maintains regional headquarters in Rolle, Switzerland; São Paulo, Brazil; and Shanghai, China.

On December 18, 2013, ADM announced that it had selected Chicago as the location for its global headquarters and customer center.

“While we considered other global hubs, Chicago emerged as the best location to provide efficient access to global markets while maintaining our close connections with US farmers, customers and operations,” said Woertz. “Chicago also provides an environment where we can attract and retain employees with diverse skills, and where their family members can find ample career opportunities. 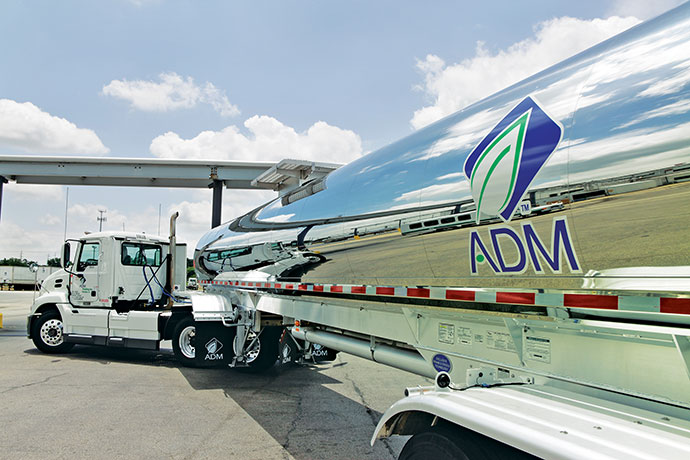 “In keeping with our intention to establish our global center in a cost-effective manner, we expect to locate a small corporate team of about 50 to 75 employees in the new center,” said Woertz. In addition, Woertz noted that the company will now evaluate alternative sites in several states for its new IT and support center, and expects to make a decision by mid-year 2014.

The commitments to Decatur remain. Woertz noted that one of the options the company considered was a comprehensive plan that would have established both a larger global headquarters and the IT center in one location and included state government support and multiyear commitments to stakeholders. However, that plan could not be realized within ADM’s timeframe.

“We decided to move forward in the way that best meets our organizational objectives,” Woertz said.