Ripe for an Upswing?

As Europe emerges from a crippling recession, investors find
new opportunities between the Baltics and the Balkans. 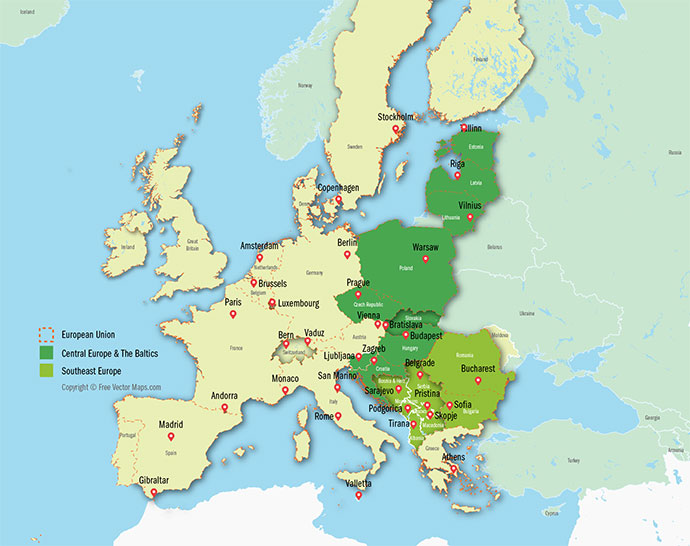 ith the fall of the Iron Curtain a quarter century ago, previously closed nations in Central & Eastern Europe (CEE) welcomed an immense influx of foreign direct investment (FDI), helping it become one of the world’s fastest growing regions. Foreign companies took advantage of the large pool of skilled, low-cost labor in countries such as Poland, Czech Republic, Slovakia and Hungary.

When the global financial crisis hit in 2008, FDI inflows plummeted. The euro zone crisis a few years later plunged the region into recession and highlighted CEE’s persistent dependency on Western Europe, both as a sales market and a source of financing.

But two of the region’s top sectors in attracting FDI — automotive and outsourcing — weathered the economic tsunami remarkably well. After a short decline following the downturn, automotive production in CEE quickly surpassed pre-crisis levels, based on data from the International Organization of Motor Vehicle Manufacturers (OICA). At the same time, outsourcing remained one of the region’s fastest-growing sectors, reaching a growth rate of over 30 percent in 2012, or twice the growth in India, according to the consultancy McKinsey & Co.

The Majors Get in Position

Hungary has emerged as the region’s manufacturing hub for the production of engines, with industry powerhouses like Audi and GM subsidiary Opel operating some of the largest facilities of their kind on earth. In neighboring Slovakia, Volkswagen produces high-end SUV models at its Bratislava plant, where it invested $407 million in 2012 to almost double the output, and plans to invest another $2 billion by 2016.

Companies seeking greater cost advantages (i.e. nearly all of them) increasingly are directing investments towards Southeast Europe, where labor costs can be half that of Central European countries. Serbia received particular attention after Italian carmaker Fiat opened a $1.3-billion plant in Kragujevac in 2012, where up to 2,400 workers will produce Fiat 500 city cars for global markets. Suppliers have followed, with several having already set up shop near Fiat, including new seating and interiors plants opened by US-based Johnson Controls last year.

In Romania, Ford invested $680 million in an expansion of its Craiova plant in 2012, and US-based Lear plans to open a new seat cover plant in Iasi with up to 1,500 jobs in 2014. Bulgaria, which did not have much of an automotive industry, welcomed Europe’s first Chinese car assembly plant in 2012. The joint venture by Great Wall and Litex Motors in Lovech started to export its cars to Western Europe last year. Chinese company BYD followed suit in 2012 and established an assembly plant in Breznik with Bulgarian energy firm Bulmineral.

Central & Eastern Europe still has not realized its potential as an automotive sales market. While car sales fell in Western Europe in recent years, they simultaneously rose in such locations as Slovakia, Hungary and the Baltics. With a population of over 100 million, the Eastern Member States of the EU still have comparably low car ownership levels, which are set to increase as income levels continue to rise.

While automotive production in Poland, in stark contrast to its neighboring countries, has declined somewhat in recent years, employment in the outsourcing sector has been steadily growing at around 20 percent per year since 2008, according to analysis by Jones Lang LaSalle. Poland, with a population of over 38 million (the largest in CEE), now hosts 110,000 of the approximately 300,000 outsourcing jobs in the region. In addition to a large and highly educated workforce, the country also offers a high number of second- and third-tier cities, which are increasingly chosen by investors fearing that established CEE locations such as Prague or Budapest are becoming overcrowded.

In the meantime, larger cities in CEE continue to attract new operations. In the latest survey of the global top 100 destinations for outsourcing investment carried out by the consultancy Tholons, Poland’s second-largest city Krakow overtook Dublin as the ninth most attractive destination worldwide. Among the 11 CEE cities included in the ranking, top improvers also included Poland’s capital Warsaw and Wroclaw.

Romania’s capital Bucharest also moved up four spots, as the country’s successful outsourcing sector more than tripled since 2009. With a population of over 20 million, Romania is poised for further growth, as salaries of outsourcing positions can be as low as half the levels in Poland.

The favorable cost environment in Southeast Europe is still accompanied by a lower level of macroeconomic stability due to higher fiscal deficits and public debt levels as compared to Central Europe. Governments in the South should also continue their efforts to improve local business environments if the region is to follow Central Europe on its growth and convergence path.

The overall economic outlook for the CEE region has notably improved this year. FDI flows both into the European Union as well as transition economies (which include Southeast Europe) rose in 2013, according to UNCTAD, which forecasts further increases in the years ahead.