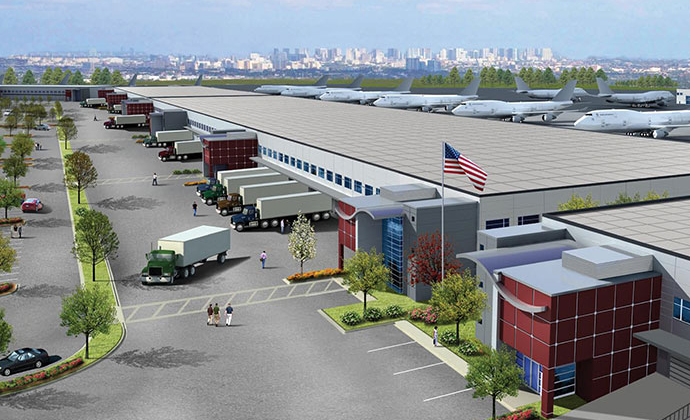 An artist’s rendering of the forthcoming new cargo facility at O’Hare International Airport, whose western section sits in DuPage County. The county in November 2013 secured more than $69 million in federal grants to help fund the local share of the Illinois Tollway’s Elgin O’Hare Western Access Project, expected to create 65,000 direct and indirect jobs by 2040 when combined with completion of the western terminal at O’Hare Airport.
Rendering courtesy of O’Hare

hicago, like many cities, is seeing a return to the city center from corporations and regular folks alike. But Chicagoland by definition encompasses 15 Illinois counties other than Cook County (21 if you count northwest Indiana and southeast Wisconsin). The city itself only accounts for 28 percent of the region’s population. And those counties each accounted for dozens of major corporate facility investments last year.

The reasons are numerous, from logistics connectivity in places such as Will County (83 projects in 2013, according to Site Selection’s New Plant Database) to high-tech connectivity and downtown-like amenities in places such as DuPage County (107 projects) and Lake County (58), an affluent area that has welcomed, among other recent headquarters projects, an expansion investment from none other than the Chicago Bears.

The city of Aurora straddles the counties of DuPage, Kane, Kendall and Will, and boasts such features as a 60-mile fiber-optic network. The city alone has welcomed 27 projects since Jan. 2012, including investments from Dyson, Grundfos, Kellogg, R.R. Donnelley, Magnetrol International and Toyota Motor Sales. 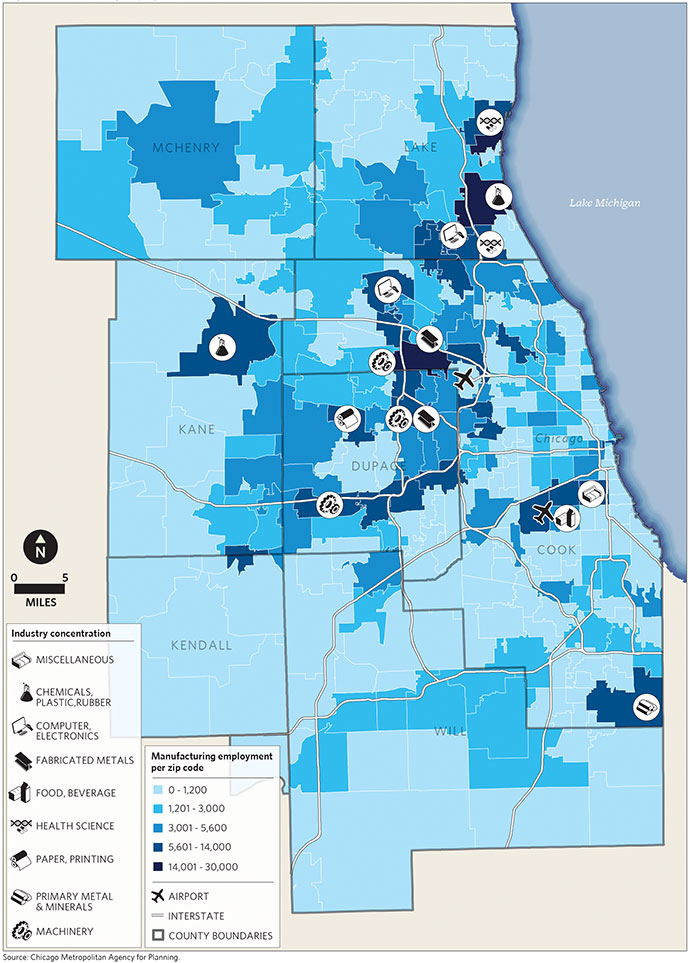 The tri-state MSA should compete as a regional entity, recommended a 2012 report from the Organization for Economic Cooperation and Development (OECD). In addition to boosting its R&D profile to a level befitting such stellar resources as University of Chicago, Argonne National Laboratory and Northwestern University, said the OECD, the tri-state region should cease and desist with petty battles.

“Several recent examples of inter-state squabbling over finite (and diminishing) public resources or over business decisions to locate in a particular part of the tri-state region point to the need to ‘take a step back’ to integrate the true functionality of the region into planning for workforce development and economic development more generally,” said the OECD report, noting the all too common presence of the “petty, predatory zero-sum intra-regional competitive approach to economic growth and job-creation.”

“The region should be competing with other regions of the world rather than fighting over the scraps,” agrees Tom Garritano, spokesperson for the Chicago Metropolitan Agency for Planning (CMAP), the region’s official comprehensive planning organization.

CMAP’s scope includes seven counties and 284 municipalities and a state mandate to execute transportation planning. In February, its GO TO 2040 comprehensive regional plan earned the 2013 National Award for Smart Growth Achievement from the U.S. EPA.

The agency last year published a report on tax-increment financing and other tax incentives that found that 202 of the 284 cities offered economic development incentives of one kind or another. Garritano says the jury is still out on their effectiveness.

The Chicago Metropolitan Agency for Planning (CMAP) in September 2013 updated its MetroPulse community data snapshots for all Chicagoland counties and each of the region’s 284 municipalities. The full data sets can be accessed at www.cmap.illinois.gov under the “Data” drop-down menu. The map above depicts the geography of core employment in the manufacturing cluster. A 2013 report from CMAP found manufacturing productivity in the region is worth $65 billion and rising, and the sector’s wages are 27 percent higher than the regional average.

“One example we cite is auto dealerships, a type of development a lot of municipalities will compete for because of the perceived sales tax benefits,” he says, noting the state rebates a percentage of sales taxes to the municipalities. But study shows there can be unanticipated and undesired outcomes, and the land sometimes could be used more efficiently.

“Office space brings a higher rate of economic return overall, beyond just sales taxes,” he says. “The municipalities are responding to the state framework, but it can create an incentive for types of development that are more expensive for the region overall.”

Illinois business leaders are used to seeing the words “expensive” and “tax” in the same sentence, and have complained for years about the state’s overall tax burden, especially since the recent income tax hike. But a May 2013 study from Anderson Economic Group, defining tax burden as the share of pre-tax operating margin a firm has to pay out in combined state and local taxes, finds that Illinois ranks a respectable 20th-lowest in the nation, up from 38th six years ago. Moreover, its business tax burden of 9.6 percent, using that measure, puts it ahead of the national average of 10.2 percent, and also ahead of neighbors Indiana (10.6 percent) and Wisconsin (11.3 percent).

Chicagoland is not alone in applying regional concepts to economic development and planning strategy. The Rockford Area Economic Development Council, for one, in January touted its top-five finish in Boeing’s recent site search for its 777X aircraft plant as proof that its regional aerospace and aviation cluster is gaining traction.

Not far away, highway and rail infrastructure just outside the congested Chicago hub is helping bring logistics and other projects to Ogle and Grundy counties, and cities such as Rochelle and Minooka.

This coming May, the 10th Tri-State Development Summit will take place in Hannibal, Mo., bringing together leaders from 35 counties in Southeast Iowa, Northeast Missouri and Western Illinois. According to the group, validation for the event’s regional approach came in November 2013 when the Summit and its 35 counties were designated as a “Great Region” by the USDA. Great Regions is a priority of US Agriculture Secretary Tom Vilsack, who has stressed the importance of a regional approach to creating economic opportunity and job creation in rural communities.