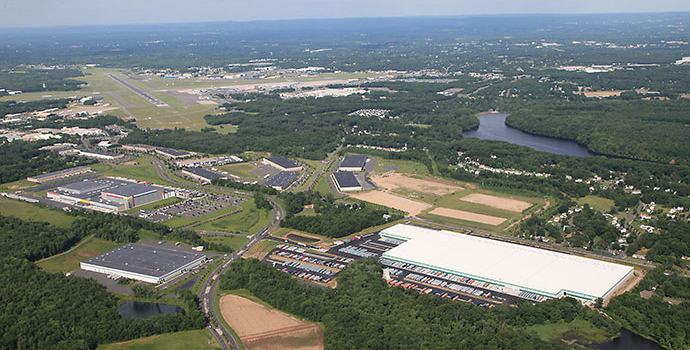 riffin Land, the owner-operator of almost 3 million sq. ft. of commercial space on land holdings of nearly 4,000 acres in Connecticut, Massachusetts and Pennsylvania, is seeing its tobacco nursery heritage supplanted by its choice reputation as a developer and partner.

As of January 2014, Griffin completed the disposition of its subsidiary landscape nursery growing operations, becoming a pure-play real estate company, explains Michael Gamzon, president and COO of Griffin Land. The company aims to diversify its home territory portfolio while growing into a super-regional player in the Northeast and Mid-Atlantic. Griffin over the past 15 years has developed a number of projects for lease to smaller users such as J.B. Hunt, Eaton and Domino’s; build-to-suit projects including a 300,000-sq.-ft. distribution facility for Tire Rack; and large land transactions with Dollar Tree, Walgreens and, in late 2013, Amazon.

To accomplish the Amazon deal, Griffin completed a $9-million land sale of 90 acres located in the center of a partially entitled 270-acre parcel of undeveloped land that straddles the town line between Windsor and Bloomfield, Conn. In addition to the purchase price, Griffin and the buyer — New York–based KTR Capital Partners — will share costs on roads connecting the site with existing town roads and with the remaining acreage in Griffin Land’s parcel, which has the potential for up to 1.5 million sq. ft. of development. Griffin has completed the master planning for the land, dubbing it Phoenix Crossing. 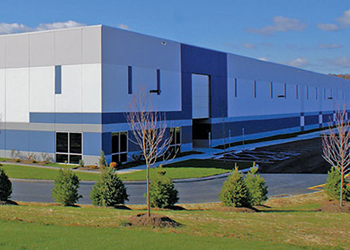 “They understand where we’re coming from, and what we want out of the property. They’re business people, and they make it work.”

KTR will develop and lease to Amazon a 1-million-sq.-ft. distribution center, where Amazon will create more than 300 full-time jobs. The center should be up and running by February 2015. Key to the process was a transportation infrastructure to support on-time delivery of Amazon employees and products, and on-time project delivery from Griffin Land.

It’s no secret Amazon wants to expand its network and get closer to population centers. Don Chase Jr., partner at KTR Capital, says the converging highways in the Windsor area suited their requirements, as did the presence, rare for New England, of a large parcel that could be developed without extensive remediation or approvals. Griffin’s portfolio includes a number of like parcels in the region available for development.

Chase says the deal involved some land title and easement issues that go back a century or more. “They understood the issues, and dug right in to help us get through that,” he says of the Griffin team. “They have relationships because of their extensive landholdings. They’re smart guys, and they’ve done this before.”

Where the People Are

A similar sentiment comes from the booming Lehigh Valley in Pennsylvania, where John DeMaio serves as vice president, operations for Olympus Corporation of the Americas. Headquartered in Center Valley, Pa., the company also occupies a logistics facility 20 minutes away along I-78 in Breinigsville, which it uses to move medical products. Griffin purchased the property in 2010.

“I’m quite impressed with how they handle themselves,” says DeMaio. “They understand where we’re coming from, and what we want out of the property. They’re business people, and they make it work.”

DeMaio says the Lehigh Valley has a lot of pluses in terms of distribution and domestic transportation, “particularly for companies who have a lot of customers in the Northeast.” (Amazon has a major fulfillment center in Breinigsville too.) His operation has achieved 85 percent same-day shipping. Other factors in the area’s favor include a dependable employee base.

Griffin is on its way to owning 1.2 million sq. ft. across five buildings in the area. In addition to the Nestle Way warehouse where Olympus operates, Griffin recently completed a 228,000-sq. ft. spec warehouse at its Lehigh Valley Tradeport project in Lower Nazareth which it subsequently leased to Switzerland–based logistics giant Kuehne + Nagel for its customer, Abbott Laboratories. Griffin expects to complete a 302,000-sq.-ft. warehouse next door by April 2014. Two additional warehouses totaling 532,000 sq. ft. are approved for a nearby parcel.

In summer 2012, Griffin’s New England Tradeport (NETP) industrial park in Windsor & East Granby, Conn., welcomed the news that 388 acres of its 600-acre property had been included in an expansion of US Foreign Trade Zone 71, located adjacent to Bradley International Airport.

Cayle Sargent is a program manager for AAR Corp., which provides logistics support for U.S. Navy and Coast Guard helicopters out of a facility at NETP, and has expanded twice since locating there.

“Griffin Land offered a new facility with the size and amenities that we desired,” he says of AAR’s quest to find a cost-effective facility near the airport. “This showed very well for our primary customer when they flew in to approve our facility plan.” AAR also needed flexibility for future growth. “Griffin Land was able to offer that,” he says.

“The I-91 corridor from which we operate is the gateway to New England and even Canada,” he says. Noting efforts to improve the state’s business climate, he says, “I think many organizations would be pleasantly surprised at what they discover here.”

KTR’s Don Chase thinks both the Lehigh Valley and Windsor regions are in prime position as e-commerce comes to maturity. “When you have product bound for your customer’s doorstep,” he says, “you want to be where the population is.”

As Griffin Land expands its own East Coast product portfolio, industrial end users also may want to be where Griffin is.

This Investment Profile was prepared under the auspices of Griffin Land. For more information visit www.grifland.com, or contact Senior Vice President Tim Lescalleet at 860-286-7660.