Pennsylvania harnesses energy in a way that pays dividends to growing firms. 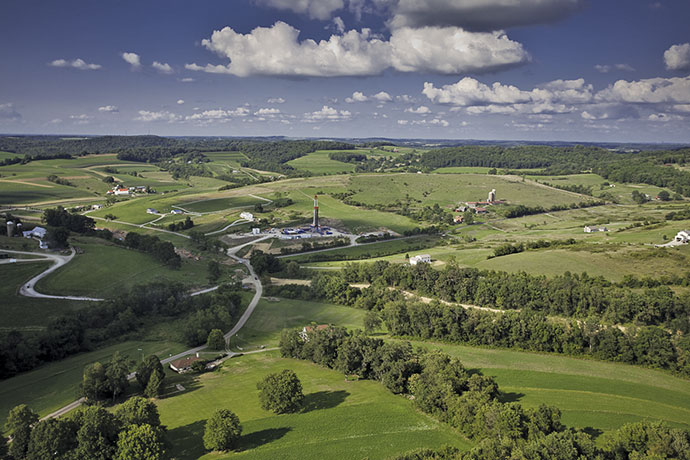 The 10-county Pittsburgh region is home to one of the world’s largest new natural gas plays, the Marcellus Shale, which contains 141 trillion cubic feet of recoverable natural gas. More than 7,000 wells have been drilled in the region since 2011, with more expected.
by RON STARNER
G

ov. Tom Corbett laid out Pennsylvania’s most ambitious energy plan ever on Jan. 21.

The bottom line? Expanding companies will find even more cost savings when they invest in the Keystone State.

Thanks to an unprecedented shale gas revolution and a governor willing to tap into it, the Commonwealth is ushering in an era in which energy costs are becoming the driver of corporate plant location decisions.

The aggressive Corbett pulled no punches when he outlined his “Energy = Jobs” plan at Pennsylvania College of Technology’s Earth Science Center in Montgomery.

“Here in the Keystone State, we know that energy equals jobs,” he said. “Pennsylvania’s abundant natural resources, sound public policies, improved business climate, skilled workforce, and commitment to competitive markets are second to none. We welcome the intense competition to attract jobs and capital investment, and Pennsylvania is committed to winning this competition.”

Corbett upped the ante in that competition by committing the state to support an “all of the above” approach to energy resources. The governor pledged to advance energy independence by relying on coal, nuclear power and natural gas; support the development of new energy technologies; support electric and natural gas competitiveness through market-based approaches; promote business expansion; and support the creation of new jobs in a wide variety of energy sectors.

“Pennsylvania is poised once again to be the energy capital of the nation,” Corbett said. “Our energy industry is creating tremendous economic and environmental progress for Pennsylvania’s citizens. Home heating costs have been cut in half, electricity prices are down 40 percent, and according to the EPA, carbon emissions are down by 7 percent.”

Patrick Henderson, deputy chief of staff and energy executive in the Governor’s Office, says it should be no mystery who the governor is speaking to with this plan: “Our number one audience on this is job creators — company owners, entrepreneurs and innovators,” he says. “They may have some old preconceived notions about Pennsylvania. We want to challenge that conventional thinking and say, ‘Take a new look at Pennsylvania.’ ”

The advantages of a Pennsylvania business location are many, Henderson notes. “Sixty percent of the US population can be reached within a day’s drive. We have tremendous access to markets,” he says. “Historic new investment in transportation projects was passed in November 2013. And in any manufacturer’s business, a key component of their budget is energy costs. The ability to produce that energy right here in Pennsylvania can be a tremendous benefit to manufacturers. In short, Gov. Corbett intends to make sure that Pennsylvania’s abundant, affordable and domestic energy resources are developed responsibly and put to work for right here. That is nothing less than a real game-changer.” 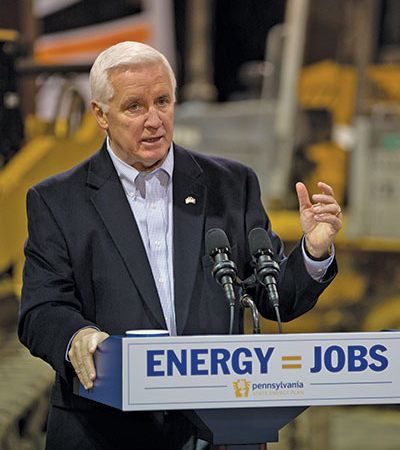 The Marcellus Shale, which contains nearly 500 trillion cubic feet of recoverable natural gas, has seen more than 7,000 new wells drilled in Pennsylvania since 2008.

As clean-burning natural gas becomes increasingly popular as a fuel source and as a petrochemical industry feedstock, the Keystone State is playing a critical role in the resurgence of American manufacturing.

“New manufacturers are arriving and building plants,” the governor said. “Companies with deep histories are expanding and branching out to the energy supply chain. Engineering firms are growing and environmental firms are hiring — and we are seeing this throughout Pennsylvania where there is drilling and miles away from it.”

He added that “our Southeast refineries are a symbol of the connection that exists between Pennsylvania’s expanding energy industry and the potential we have to achieve energy independence in North America.”

A case in point is Monroe Energy LLC, a wholly owned subsidiary of Delta Air Lines in Delaware County. The firm purchased an old ConocoPhillips refinery near Philadelphia in 2012 as part of Delta’s strategy to shore up its energy supply chain. Now operational again, the refinery produces jet fuel that goes directly into the system to supply Delta’s aircraft. It also exchanges gasoline and diesel fuel to BP and Phillips 66, who in return supply Monroe with more jet fuel from refineries in Houston and on the West Coast.

“Delta wanted to get a handle on their jet fuel costs, which were running at about 40 percent of the costs to fly an airplane,” says Jeff Warmann, president and CEO of Monroe. “Being in the jet fuel market and having the capability to make their own jet fuel was the whole driver for this acquisition.”

Warmann explains that “a quarter of Delta’s assets are located in this region of the country. When we looked at the refineries closing in this area, we knew that would put a burden on getting jet fuel to the locations where Delta needed it. Delta viewed the shutdown of this particular refinery and others in the region as an opportunity to find a creative and innovative solution to the rising costs of jet fuel. This asset was in a strategic location that was advantageous to Delta.

Rolling Out the Welcome Mat

State officials did everything possible to make sure the deal closed expeditiously, Warmann adds. “We first approached the Governor’s Office and they connected us with the Governor’s Action Team (GAT). The Governor’s Office and GAT facilitated our meetings with a number of people whom we needed to work with to put the actual transaction together and get all of the needed permits — wastewater treatment, water usage issues, electric utility infrastructure, DEP permits, etc. Our Congressman Pat Meehan and State Senator Dominic Pileggi were also instrumental in helping us to close the deal in an expeditious manner. They were supportive every step of the way. Everyone was extremely helpful, from the local, county, state and federal officials in Delaware County, to the leadership at all three chambers — Greater Philadelphia, Delaware County, and the Pennsylvania Chamber. I have never had the experience of being welcomed so much in an area. We were very impressed.”

Warmann adds that the abundant supply of skilled labor in the area makes the location very attractive to industrial businesses. “We have excellent craftsmen in this area and excellent operations people,” he says. “The engineering and technical support in this region is quite good. More than 100 colleges and universities are located in Greater Philadelphia, and the level of quality of workers that we find here tops anything we see along the Gulf Coast. That factor attracted us initially and continues to be a major benefit to our company.”

Henderson says Monroe is far from alone in taking advantage of Pennsylvania’s considerable energy resources to lower its operating costs. Procter & Gamble, Spiral Path Organic Farm, Knouse Foods Cooperative and Nestle Waters have all substantially lowered their recurring energy bills by taking advantage of renewable energy and other resources in the Commonwealth.

“Pennsylvania has been rated as the second-most competitive energy market in North America,” Henderson says. “You can choose your supplier here in Pennsylvania for both electricity and gas. You can combine and bundle here. A lot of states don’t have competitive markets. You can save money by doing all of this in Pennsylvania.”