Skyplex is a prime airport commercial development site in a location workers come to visit. 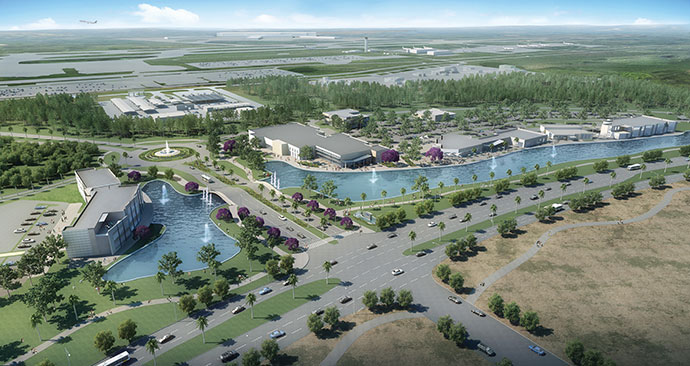 Skyplex spans 1,100 acres, 260 of which are zoned for aviation-related businesses on sites fronting the airport (75 acres are runway-adjacent) and its 12,000-foot runway (a second is planned). The other 860 acres are ready for non-aviation development, particularly office parks and commercial centers. RSW, operated by the Lee County Port Authority, is the region’s busiest airport and one of the 50 busiest in the US, contributing nearly $4 billion in economic impact to the area. Seventeen air carriers, including three based outside the US, provide nonstop passenger service to more than 40 destinations in North America and Germany.

Aerospace enterprises — maintenance, repair and overhaul providers, aircraft support service providers and companies that would benefit from RSW’s Class A federal inspection facilities, including customs, immigration and agricultural services — are logical facility locators on Skyplex’s airport frontage acres. But the whole site has advantages unique to the region, particularly its location within a Foreign Trade Zone. Interstate 75, at RSW’s doorstep, connects Miami and south Florida to key metros running north through Atlanta and Cincinnati to Detroit and the Great Lakes.

“Skyplex has much of the necessary infrastructure already in place and offers more than 1,100 contiguous acres of land with unlimited growth potential,” says Robert M. Ball, A.A.E., executive director of the Lee County Port Authority. “It also has convenient access to intermodal transportation and is proximate to commercial, retail, residential, entertainment venues and several higher education institutions.”

Richard Broome, Hertz’s executive vice president of corporate affairs and communications, told Site Selection’s Ron Starner in a Site Selection Online exclusive that Hertz’s main location criteria were: a site “acceptable to the company and the respective employees based in both New Jersey and Oklahoma”; ability to travel in and out of the area; access to quality employees; and a lifestyle acceptable to company leadership and employees.

Florida met those requirements, so it was now up to communities in the Sunshine State to make their case to Hertz and its site consultant. 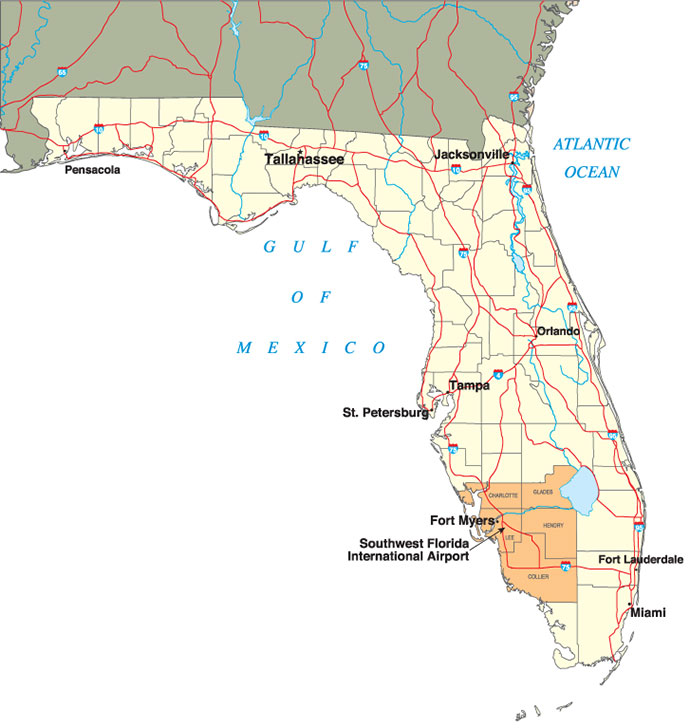 “Once we were in Florida, Lee County emerged as the area that was the most interested and welcoming and aggressive toward Hertz,” Broome told Site Selection. The universities and Southwest Florida International Airport were the icing on the cake, resulting in Hertz’s 700-employee relocation to a 300,000-sq.-ft. site in Estero.

“Florida is a global tourism epicenter, with more than 89 million visitors last year alone and almost 1 million Floridians employed in the industry,” said Hertz Chairman and Chief Executive Officer Mark P. Frissora that day. “As the world’s largest car rental company, we believe Southwest Florida is the perfect location for our worldwide headquarters. We are gratified, as we commemorate the groundbreaking today, by the ongoing support and warm welcome from public officials at all levels and citizens throughout the region. We are already calling Southwest Florida our home, and we will quickly become an important part of the community.”

Meanwhile, Skyplex is ready to welcome tenants with the same support and warm welcome on the local level that Southwest Florida can offer regionally. Major infrastructure is in place, including utilities, employee parking and a multi-lane access road. Telecommunications options are continuously expanding, according to Lee County Port Authority, and zoning already in place will support a variety of investment types.

“Although there are alternative inventory options in Southwest Florida, very little, if any, exists within a Foreign Trade Zone with an aviation component,” notes the Airport Authority’s Robert Ball. “Skyplex is an airport property and offers access into the airport and the site via multiple roadways.”

Speaking of roadways, Red Sox fans moving into the area will appreciate a recently widened Daniels Parkway, granting easier access from Skyplex to the newly built JetBlue Park, where the Bosox conduct spring training. And the Minneapolis Twins play at nearby Hammond Stadium.

These teams and their fans enjoy Southwest Florida’s warmth and hospitality for a few weeks in the late winter and early spring. Skyplex investors will experience it year round.

This investment profile was prepared under the auspices of the Lee County Port Authority and Southwest Florida International Airport. For more information, contact Mark Busalacchi, director of business development, at (239) 590-4586; mfbusalacchi@flylcpa.com.