A Vision Come To Life

For the future of biomedicine, Worcester is a place true collaborators can call home.

he cauldron of innovation that gave rise to one of the world’s most successful drugs is poised to produce more where that came from.

Humira is the top selling drug in the world, topping out at more than $10.6 billion in sales in 2013. The multifaceted drug, used to treat such various conditions as rheumatoid arthritis, Crohn’s disease and psoriasis, was discovered and developed in Worcester, Mass., in the 1990s by the former BASF pharmaceutical division now owned by AbbVie, the 2013 Abbott Labs biopharma spinoff that employs more than 700 in Worcester at its flagship biologics R&D center.

The concept that led to Humira’s development was close integration of research and biologics manufacturing, with the making of the product growing in parallel with the development of the discovery platform.

You couldn’t ask for a better description of UMass Medicine Science Park, located right next door.

Operated by a non-profit that collaborates with University of Massachusetts Medical School (UMMS), the park is home to 1 million sq. ft. of biosciences lab and office space available for lease in five buildings; a hotel and conference center complex; and one crucial distinction: access to 18 research cores at UMMS.

Depth of Knowledge, Pinnacle of Partnership 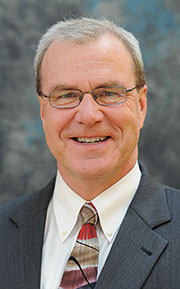 UMMS is home to a Nobel laureate, half a dozen Howard Hughes Medical Institute researchers and renowned programs in immunology and biomedical engineering, among others. The school and park are in the heart of a biomedical hub that rivals, well, even the Hub itself.

“Worcester is the second largest city in New England, and we’re 40 miles from the epicenter of the life sciences world,” says Kevin O’Sullivan, president and CEO of Massachusetts Biomedical Initiatives (MBI), an incubator on the nearby Worcester Polytechnic University campus that has seen some of its 64 graduate companies move toward that Boston-Cambridge epicenter.

But the UMass and Worcester brands have their own profiles. The city’s 4.86-percent rate of population growth over the first decade of this century was second among like-sized New England cities, and outpaced Boston’s growth rate. Moreover, due to the metro area’s 13 colleges and more than 35,000 college students, Worcester in 2010 had the third-highest population of 20-to-34-year-olds of the major cities in New England. UMMS is one of the fastest growing research institutions in the country, with total private and government research contracts worth more than $240 million in FY2013.

O’Sullivan was involved in the formation of the science park in the 1980s. A series of events concluded with the 2012 sale to UMMS by Alexandria Real Estate Equities of the final three buildings. Meanwhile, the $1-billion life sciences initiative launched by Gov. Deval Patrick in 2008 has borne fruit.

“The industry has grown by 40 percent the last few years employment-wise,” notes O’Sullivan, making the debut of the science park well-timed. “Walk down Main Street and ask people what Worcester is all about, and they will tell you it’s about life sciences, education and innovation.”

It’s also about expanded highways and 22 commuter rail runs in and out of Boston. That investment “is really connecting the golden triangle of Worcester, Boston and Providence,” says O’Sullivan, whose view out his office window encompasses new condo development, a new $70-million vocational school and the new corporate offices of insurance firm UNUM Group at the blooming 2.2-million-sq.-ft. CitySquare mixed-use development. “We’re able to recruit the brains,” he says of the region’s increasing drawing power. 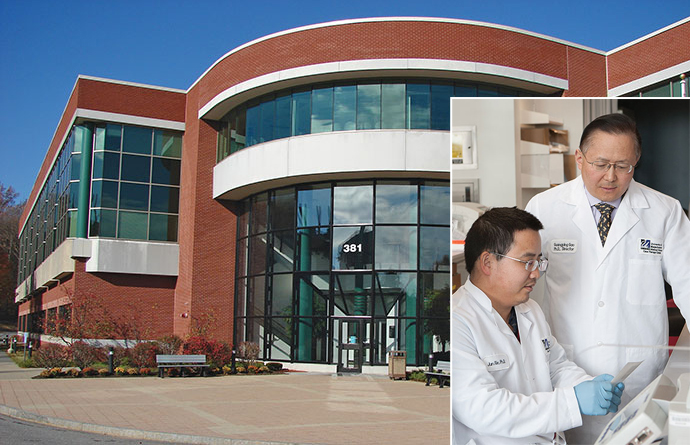 UMass Medicine Science Park is home to 1 million sq. ft. of biosciences lab and office space, a hotel and conference center, and one crucial distinction: access to 18 research cores at UMass Medical School. Guangping Gao, PhD (inset), the Penelope Booth Rockwell Chair in Biomedical Research and professor of microbiology & physiological systems, works in his lab at the new $400-million Albert Sherman center on the medical school campus next door.
Photos courtesy of UMMS

Area leaders have helped it happen by “laying down their swords and shields” and collaborating for the good of the region and the commonwealth. “Michael Collins gets it,” he says of the UMMS chancellor. “He made a bold move when he bought the park. He has a vision of building not only the medical school, but also the teaching hospital and the commercial park.”

Dr. Terence R. Flotte gets it too. He’s an internationally known gene therapy researcher who also serves as dean of UMass Medical School, and whose own lab in the science park’s Bio 5 building recently moved into the new $400-million Albert Sherman Center on the UMMS campus next door. He says growing UMMS’s translational research capacity just as the industry focuses on personalized medicine couldn’t be better timed.

“A number of things are coming together at the same time,” he says, noting the amazing rate of innovation since the human genome was mapped a decade ago. “The science has matured, so things that look like real products are not rare anymore.”

UMMS is making a concerted effort to provide structured internship and training opportunities with companies for grad school students. “We think we’re at the front end of the curve on these kinds of approaches,” he says.

He says the biosciences research cores UMMS offers “serve to accelerate the rate of forward progress on a lot of projects,” in part because of the pride core directors take in their personal attention to clients as techniques are refined in such areas as next-generation DNA and RNA sequencing and proteomics.

“It’s an added value even beyond the fact it provides convenience and speed,” he says. “Saving time in the product development pathway is probably the most valuable thing you can do for an early-stage company.”

As for intellectual property, UMass is as entrepreneurial as the companies it seeks as partners.

“We don’t have a pre-conceived notion that every relationship has to be according to a pattern or policy we have,” says Flotte. “We understand the flexibility companies might want to have between dealing with investigators as individuals and us as a university. Most things within the scope of responsible stewardship of university resources we are willing to do to move the science forward.

“Our mission is to help create new products for patients, and usually that entails working collaboratively with companies,” he says. “That doesn’t mean the company gets every single thing they want, but we are going to make sure we create a path forward.”

The UMass Medicine Science Park and its research cores provide an ideal sequence of stepping stones.

This Investment Profile has been prepared under the auspices of UMass Medicine Science Park. For more information visit www.colliers.com/p-usa1001226, or call Keri Kirrane, senior manager, facilities for UMass Medical School at 508-856-4726.