From Inner Harbor
to Outer Space

Maryland sees its future in the stars. 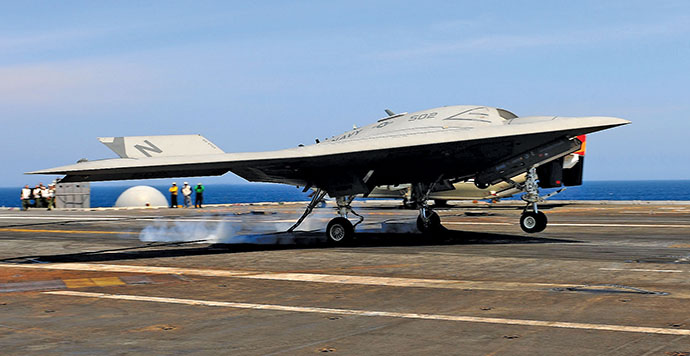 An X-47B Unmanned Combat Air System (UCAS) demonstrator completes an arrested landing on the flight deck of the aircraft carrier USS George H.W. Bush. The landing marks the first time any unmanned aircraft has completed an arrested landing at sea.
Photo by Mass Communication Specialist 3rd Class Kevin J. Steinberg courtesy of the US Navy
by PATTY RASMUSSEN
I

f Maryland state leaders have their way, the aviation and aerospace sectors will blast off with new opportunities in high tech and high-paying jobs in the next few years.

In November 2013, the state and NASA’s Goddard Space Flight Center entered into a technology transfer partnership in the hopes of sharing resources while attracting high-tech companies to Maryland. The new agreement signed by Gov. Martin O’Malley, U.S. Sen. Barbara Mikulski and Goddard Space Flight Center Director Chris Scolese is viewed by all parties as a classic win-win situation.

“This longstanding partnership between the state and Goddard — now formalized — is about creating family-supporting jobs and expanding opportunity for local businesses, building a stronger future for Maryland’s innovation economy,” said O’Malley. ”

“We at Goddard had an interest to partner with the state to meet our individual and mutual goals, transferring tech to industry,” says Nona Cheeks, chief of the Innovative Partnership Program (IPP) office at Goddard. “We gave this a lot of thought before we signed the agreement. Our question was ‘How can we best serve each other’s interest to make each other stronger?’ The agreement optimizes the opportunity for the great businesses we have, and those the state is looking to attract, as well as the work we do here at NASA Goddard.”

Goddard and the state will engage in a variety of technical exchanges with Maryland companies with regard to new trends, theories, techniques and challenges in aerospace technology. The agreement allows Goddard to collaborate on the design of educational and workforce resources specific to the center’s needs.

The next step is dialogue. Both sides need to discuss their R&D priorities and talk about the technology they’re developing within NASA that they can share with local industry. “Ideally there are small companies residing in the state that are interested in the technologies we’re developing at Goddard, and they want to build on the technology for NASA purposes and/or a separate commercial purpose,” says Cheeks. “We have unique needs in terms of meeting our science missions and goals. We’d like to know if the state has those needs as part of their technology thrust. Are there companies out there that the state is looking to attract or to build on? There might be companies that we could help put forward to meet a NASA need. We want to be an enabler.”

Matt Scassero is the director of the University of Maryland UAS Test Site. He emits an audible groan when the word “drone” comes up while discussing Unmanned Aircraft Systems (UAS). Though he acknowledges its user-friendly nature, the word “drone” conjures up the science fiction or military aspects of UAS. Future applications of UAS are much broader.

“Maryland is home to some of the most gifted minds in space and technology.”
— Gov. Martin O’Malley on a tech transfer agreement signed by the State of
Maryland and NASA Goddard Space Flight Center

Scassero says a host of civilian/commercial UAS are already in use in other countries. “The biggest one is precision agriculture, crop dusting, surveillance of fields and crops, figuring out what they need,” he says. “Japan has used UAS for over 20 years. It’s being used for anti-poaching in Africa. There are surveillance applications for forestry, mining and conservation monitoring. And there’s the whole new field of cargo carrying getting ready to take off, if you’ll pardon the pun.”

Once the FAA settles on rules and regulations governing how UAS will operate in commercial airspace the sector is poised to explode. “We have industry people lined up, ready to fly with us, and ready to research and partner with us,” Scassero says. “All they need are the rules to go start making money whether it’s precision agriculture, natural resource or public safety. There are already aircraft manufacturers in Maryland building these things for the military and now they’re ready to build them for commercial use.”

Ask Scassero what the UAS agreement means to Maryland and you get a one-word answer: Jobs. According to the projections MAAP uses in their proposals, UAS will be an $89-billion industry over the next decade. In the state of Maryland, Scassero says UAS could have a $2-billion impact with the potential to create over 2,500 jobs between now and 2025.

“And these are very good, technically oriented jobs,” he adds. “We estimated the average salary would be in the mid-sixties. It’s good, valuable work that will improve the industry, the state and the country.”

A Powerful Sector Gets Stronger

Maryland has a rich heritage in the aerospace/aviation sector due in part to the large regional defense presence. There are 8,080 aerospace and defense companies in Maryland accounting for 100,300-plus private sector jobs while generating $25.4 billion in economic activity. Sixteen of the nation’s top 25 aerospace companies are located in Maryland. With 10,970 and 8,000 employees, respectively, Northrop Grumman and Lockheed Martin are among the top 25 employers in the state.

‘‘We have industry people lined up, ready to fly with us,
and ready to research and partner with us.’’
— Matt Scassero, director of the University of Maryland’s UAS Test Site

In 2013, Maryland’s legislature approved $22.7 million from the sale of revenue bonds to serve as the first installment of a $91.5-million capital project: a new classroom building devoted to aviation science, computer science and engineering instruction, expected to be finished by 2015.

“In the new building that will rise behind me,” said President Juliette B. Bell at the groundbreaking ceremony, “future airline pilots, air traffic controllers, engineers, mathematicians, computer scientists and others will be trained as the next generation of leaders in their fields.” 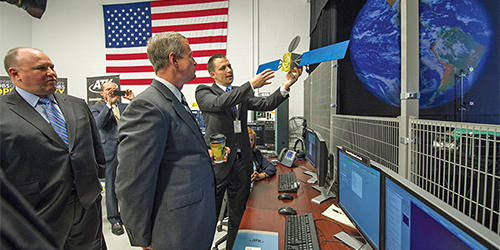 Jeff Braden, head of the Robotic Rendezvous and Proximity (RPO) testing facility at ATK Space Systems Division (SSD) in Beltsville, describes in-orbit satellite servicing to Gov. Martin O'Malley. ATK, which operates at four locations in the state, may create as many as 100 new jobs through this new venture.
Photo courtesy of Executive Office of the Governor

That type of public investment in higher education is what Goddard’s Cheeks is hoping for from all stakeholders — education, industry, the public and private sectors — to generate substantive outcomes from the NASA/Maryland MOU.

“This opportunity is to build on, but by the same token if we don’t give it the right attention and focus, it’s ours to lose,” she says. “We’re really interested in pushing our technology out to industry for purposes of having industries continue to build on it. We’re in the business of doing the R&D, flying it, testing it, but we’re not in the business of manufacturing. We’re a potential customer, as are other government agencies in the state, region and country.”