Greater Dubuque embodies what cross-border collaboration is all about. 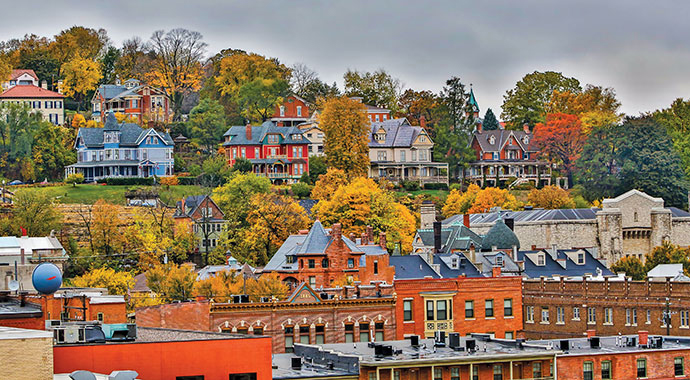 ark Twain found the Upper Mississippi otherworldly, serene and bucolic when he traveled through the region 130 years ago. Today he’d find some of those same enduring qualities serving the needs of people and companies decidedly grounded in this world.

In the same year we mark the debut of a new per-capita Governor’s Cup alongside the traditional Governor’s Cup, Site Selection introduces the Big Muddy Cup, awarded to the top metro area along the banks of the Mississippi River for new corporate facility investments per 1 million population over the 18 months from July 1, 2012, through Dec. 31, 2013.

“The majestic bluffs that overlook the river, along through this region, charm one with the grace and variety of their forms, and the soft beauty of their adornment … ”
— Mark Twain, “Life on the Mississippi,” 1883

Dubuque, Iowa, Iowa’s oldest city founded in 1833, is the winner of our inaugural award, having attracted 21 projects over that time span with a population of just over 95,000 people. (The city also ties for first in its population tier among our Top Metros of 2013) Dubuque is one of five metro areas and five micropolitan areas making the Top 10.

Dubuque finds itself poised at the juncture of three states — Iowa, Illinois and Wisconsin — and at a nexus of higher education institutions that was key to IBM’s decision five years ago to locate a major 1,300-job technology services delivery center. Over 18,000 students attend higher education institutions within a 20-mile (32-km.) radius. IBM has long since surpassed its hiring goals. (And it just so happens to have located another major project in another of our Top 10 metros: Baton Rouge, La.) 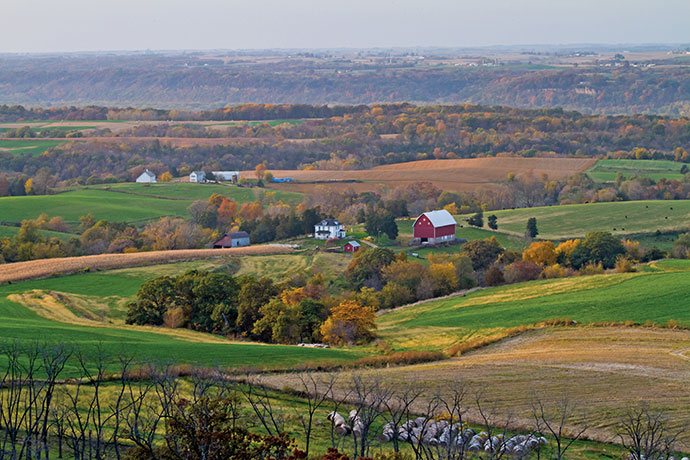 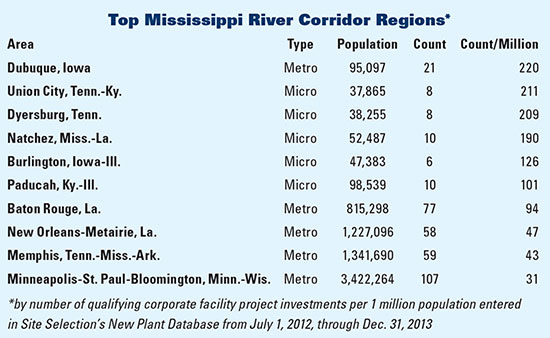 Dubuque is known for its French Canadian heritage, lead mining history and scenic bluffs, not to mention the “Field of Dreams” film location at the old Lansing family farm, and the national farm toy museum, in nearby Dyersville. There’s continuing success at the Port of Dubuque’s $400-million “America’s River” redevelopment that opened in 2002 featuring a convention center and resort, casino, riverwalk, museums and a renovated brewery. The city is known for producing such various products as John Deere backhoes, gelatin, windows, sheet metal, motors, bacon bits and Spam.

Those last two are made by Hormel Corp., which early this year moved forward with a two-phase expansion project that will move bacon bits production from a plant in St. James, Minn. (at the cost of 75 jobs there), and bring Spam production to Dubuque. The company’s existing Spam production plants are in Austin, Minn. (Hormel’s hometown); Fremont, Neb.; Denmark and South Korea. Capacity had been maxed out in Minnesota, said the company.

“The planned move of our Hormel® bacon toppings operation is expected to be completed by late summer,” says Hormel spokesperson Rick Williamson by email. “The timing for the SPAM® operation is still in process, and we anticipate production to begin in early 2015.”

The company sells more than 122 million cans of Spam annually, 90 million in the US alone. Press coverage by the Dubuque Telegraph Herald noted a permit application for a nearly $30-million project at Hormel subsidiary Progressive Processing that may create as many as 91 new jobs in Dubuque. A conditional $4.1-million incentives package from the city and the Iowa Economic Development Authority was in negotiations at press time.

Rick Dickinson, president of Greater Dubuque Development, said the project came to the attention of his team by way of “the headquarter calls we make as an extension of our national marketing and existing business programs,” which have won awards for their success. Northeast Iowa Community College was also brought in to convince Hormel Dubuque was the place to grow. But, said Dickinson in a press release, “Mark Zelle and the employees at Progressive Processing were the number one incentive for Hormel’s decision.”

There’s no shortage of other projects in the area, including major headquarters and office locations from Durrant Group and McGraw-Hill; and new industrial projects from Camoplast Solideal (in nearby Peosta) and Brightwood Corp., whose pine moldings will be supplied to Andersen Corp.’s nearby Eagle window operation.

Camoplast Solideal Plant Director Patrick Fortin said of his team, “These folks are some of the best anywhere. Their dedication in the work reduced by 80 percent the time to assemble one track system unit, in six years.”

The city’s older industrial footprint is finding new traction as well: Witness the 16 jobs from Design Mill, a software development firm growing in the city’s revitalized Millwork District. The district was one of seven projects nationally to receive in February the 2013 National Award for Smart Growth Achievement from the US EPA.

“The thing that stands out for me is the strength of the city administration,” Jones says. “They’re extraordinarily engaged.” He includes in the praise the work of Greater Dubuque Development. “They do a lot of the groundwork. Cities having to do that can be cumbersome.” Such an ideal pairing, he says, is “a rare occurrence.”

Asked what strikes newcomer prospects, he says, “The first thing they’re caught off guard by is the beauty of our Main Street. Then they’re attracted to the Port of Dubuque and the building stock just north of there. We have a wonderful park system, with amazing views of the Mississippi from Eagle Point Park. The concept of Iowa is it’s flat, but Dubuque is very fortunate to have the bluffs. The views are spectacular, unbelievable — unless you’re riding a bike. When you go up and begin to tour that historic area, you look out onto the city and then the Mississippi. On the left is Wisconsin, and on the right is Illinois. It’s a hub of opportunity.”

John Deere Co. certainly thinks so. That’s why the company in 2012 announced plans for a $44-million, 125-job expansion at its longstanding Dubuque Works facility, including the reshoring of some component manufacturing from abroad. Early this year, the factory celebrated the manufacture of its 250,000th backhoe.

Mayor Ray Buol, a native of Dubuque, worked for 30 years at that John Deere plant, and has been director of landscaping and grounds at the University of Dubuque, his alma mater, since 2002. In 2009, Mayor Buol was instrumental in the launch of “Smarter Sustainable Dubuque,” a public/private partnership between the city and IBM Research, the division of IBM responsible for its “Smarter Planet” campaign. Buol knows machines, he knows the soil, and he knows the makeup of the people he leads.

“Working with numerous partners in the community is key, across all sectors,” he says. “That comes to bear any time there’s an opportunity. We call it ‘Planning, Partnership and People’ — the three Ps. That has been the underlying key to our success.”

So has a 20-year long-range vision, as well as an election platform turned top priority called Sustainable Dubuque, whose 40-person committee devised a plan that was one of the things to catch IBM’s eye in 2007, Buol says. Meanwhile, Greater Dubuque Development has fostered programs such as Opportunity Dubuque, a workforce development partnership that earned a Gold Award in 2013 from the International Economic Development Council.

“Dubuque has a great number of manufacturing establishments; among them a plow factory ... ’’
— Mark Twain, “Life on the Mississippi,” 1883

The area’s strong infrastructure takes the form of hard assets as well as soft: In June 2012, a construction accident caused a major disruption in critical telecommunication service. “Utilizing our strong relationship with CenturyLink (formed through the InfoAction program), Greater Dubuque’s staff notified top personnel of the outage, communicated the issue to the existing business base, and monitored the repairs to the fiber,” said a release from the agency noting yet another award. “As a result, CenturyLink completed a $2.3-million enhancement project which now provides Dubuque with 68 miles (109 km.) of new, state-of-the-art fiber.”

“Everybody seems to be on the same page,” says Buol. “It isn’t a willy-nilly approach like you see in a lot of local communities.” That’s why the state, he says, looks to Dubuque as an example of how to leverage resources for the greater good. “Even through the recession, we were pretty successful at keeping unemployment down and keeping our businesses competitive. That doesn’t happen by accident.”

Nor does partnership across state and institutional lines. Buol recalls how college presidents from University of Wisconsin-Platteville and other Wisconsin and Illinois schools, plus the three colleges in Dubuque, showed up to personally tell IBM how their collective resources and enrollments could fill the company’s workforce pipeline.

“Things like that just don’t happen everywhere,” says Buol. “If a business goes into Platteville, we don’t look at it as if we’re on the losing end. My daughter works at a hospital in Platteville and lives in Dubuque. We look at it as a region. It’s just how the Midwest is, I guess.”