Governors of New York, New Jersey and Pennsylvania push reforms aimed at making the tri-state region one of the most competitive in the nation.

Comcast and Liberty Property Trust on Jan. 15 announced plans to build a second Comcast office tower in Philadelphia. Called the Comcast Innovation and Technology Center, the $1.2-billion project will be the tallest building in the U.S. outside of New York and Chicago. Construction will employ an estimated 20,000 workers.
Rendering courtesy of Comcast and Liberty Property Trust

n overhauled tax code, a revamped incentives package and a reinvigorated energy plan are making the Northeast U.S. one of the most closely watched regions of the country.

Governors Andrew Cuomo of New York, Chris Christie of New Jersey and Tom Corbett of Pennsylvania have collectively embarked on the most ambitious overhaul of public policy in the history of the tri-state region. Tired of hearing critics bash the region as “anti-business,” these three governors have set their sights on leading a spirited comeback.

Blazing perhaps the most ambitious trail of the trifecta is Cuomo, whose goal is to turn New York into a competitive force that goes head to head with Texas, Florida, Georgia and every other state that’s considered to be among the most business-friendly in the nation — even if he has to take on newly elected New York City Mayor Bill de Blasio in the process.

Both are staunch Democrats. Cuomo just happens not to share de Blasio’s “tax-the-rich” rhetoric or policies; and the friction between the two has already engendered much debate and news coverage in New York.

The linchpin of de Blasio’s new administration, so far, is a controversial tax on the wealthiest residents in the Big Apple. The linchpins of Cuomo’s plan are record-setting tax cuts and the most sweeping startup support program in state history.

Executives at Naturally Scientific and NOHMs — two firms that are expanding in Rochester — tell Site Selection that Cuomo’s reforms are working.

Both companies have chosen to expand in the Eastman Business Park in Rochester. NOHMs (Nanoscale Organic Hybrid Materials) Technologies Inc. elected to build its pilot nanoscale battery materials manufacturing facility in EBP. The project qualifies for $1.5 million from Cuomo’s Regional Economic Development Councils initiative and is expected to create more than 100 full-time jobs in scientific, technical, operations and manufacturing areas over the next three years.

Naturally Scientific U.S., a joint venture between U.K.-based Naturally Scientific and New York-based BCW Chemicals, plans to bring 50 new jobs to EBP by 2016 and 170 jobs by 2018. The company will use newly developed patented technology to reproduce high-value plant and vegetable oils.

Rich Delmerico, vice president of engineering and operations for NOHMs, says the company was spun out of technology originating at Cornell University labs. Founded in 2010, the firm uses novel materials in developing breakthroughs in lithium ion battery technology.

“Our value proposition is roughly twice the energy production at half the cost,” says Delmerico. “We make batteries that are lighter and safer than traditional lithium ion batteries.”

He notes that Rochester “is the perfect location for our business. All of the essential resources are here,” he says. “The area provides great manufacturing support. The analytical services we need are here. We are working with the Kodak Specialty Chemicals Group. The Rochester infrastructure is very friendly toward this kind of work. We moved here in August and have since expanded to about 20 employees. We have the right elements and skills sets in Rochester to bring this technology to market.”

Delmerico notes that “the technology has been here for many years, due to the presence of Kodak, Xerox, the universities and many other research organizations. I can’t say enough about the resources here. New York is funding our project through the STARTUP-NY program and NYSERTA. It has been a great journey for our company.”

Total investment to date into the project, he adds, is about $5 million. “We estimate that this will be a $70-billion market for new battery technology by 2020,” he says. “We address about 20 percent of that market. It is an enormous opportunity.” 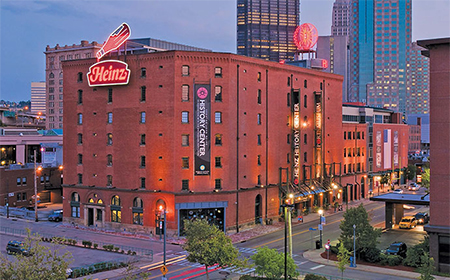 An affiliate of the Smithsonian Institution, the History Center is Pennsylvania’s largest history museum and presents the most compelling stories of sports and history from Western Pennsylvania.
Photo courtesy of Senator John Heinz History Center

Keith Wilson, managing partner of Naturally Scientific U.S., concurs with Delmerico’s assessment of Rochester. “We looked at Houston, Florida and other locations before choosing Rochester as our home base,” Wilson says. “We looked at logistics, cost of living, and the cost of deployment of the technology. New York was very motivated to bring this technology to the state due to the job potential it offers. New York is really open for business.”

An $8-million loan though Empire State Development made the deal possible, says Wilson. “They also helped with ease of permitting, logistics and financial incentives. We wanted to be near a number of folks who could use our oils. Things all came together with the Eastman Business Park.”

When Eastman Chemicals spun out of Eastman Kodak in Rochester many years ago, notes Wilson, “it created an entire support system for our industry.”

The $10-million capital investment is expected to be operational by the end of this summer, adds Wilson. “The Eastman Business Park location is very cost effective for us,” he says. “It has its own utility infrastructure, and it has access to freshwater drawn from Lake Ontario. That is very advantageous for a specialty chemicals company like ours.”

“Due to Gov. Cuomo’s cuts in spending and business-friendly stewardship of New York’s economy, New York has a $2-billion surplus — a rare feat considering the challenges and fiscal stress that states are faced with these days,” Boyd says. “This has allowed the New York State Tax Relief Commission to make some rather bold and trend-setting recommendations to jumpstart the state economy.”

A major goal of the Commission is to cut property taxes. “Rightly so,” says Boyd, “as property taxes have been a major cost burden to not only companies, but also professionals living and working in New York City suburbs like Winchester, White Plains and throughout Long Island, where property taxes are consistently ranked among the highest in the nation. This makes recruiting and maintaining a workforce for our clients in those markets extremely challenging.” 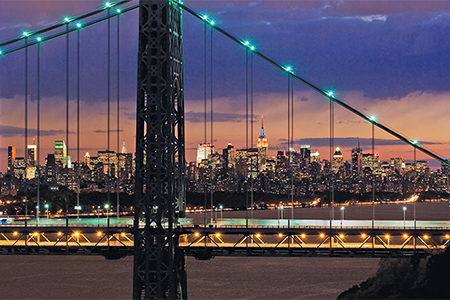 View of Manhattan through the George Washington Bridge.
© NYSDED-NYS Dept. of Economic Dev

The property tax-cut recommendation will put a two-year freeze on tax hikes and reward municipalities that consolidate services, such as police, fire, sewage and other departments.

“This is an approach like the one undertaken by our governor here in New Jersey, Chris Christie, during his first term,” Boyd says. “This property tax cut, along with a reduction of New York’s estate tax, sends a message to our site-seeking clients that Albany no longer wants to be viewed as hostile to their interests. Beyond the numbers, it sends a very positive and refreshing marketing message to the business community.”

The Commission also wants to reduce the state corporate income tax to 6.5 percent, down from its current rate of 7.1 percent. This would make New York’s rate lower than rates in neighboring states. New Jersey’s corporate income tax rate currently is 9 percent; Massachusetts’ rate is 8 percent; and Connecticut’s rate is 7.5 percent.

“Moreover,” adds Boyd, “the Commission seeks to help Upstate New York, where some municipalities are struggling with double-digit unemployment figures, by lowering the corporate income tax rate to 2.5 percent for manufacturers there. This is a creative, novel approach and a real acknowledgement that Upstate New York needs special economic development support from Albany.”

New York’s neighbor across the Hudson River, meanwhile, is not standing pat. A significant overhaul of New Jersey’s state incentives legislation is poised to make the state one of the most competitive in the nation in luring new jobs and industry.

Jay Biggins, principal of Biggins Lacy Shapiro, a national site selection consulting firm based in Princeton, says the new legislation — which he helped author — “addresses the issue of the previous program running out of money. This new legislation distinguishes New Jersey from virtually everywhere else in the country in terms of commitment to creating jobs.”

One big change, says Biggins, is that the new incentives program relies on the net-benefit test. “It requires every project to pass a threshold test to demonstrate that the project is financially positive for the state,” he says. “If you can demonstrate that, then the program has no cap. That is important. People could not plan ahead before; now they can.”

This delineation between urban and exurban incentive amounts to projects “sends a very powerful financial signal,” Biggins says. “The other thing to keep in mind is that New Jersey’s incentives are virtually unrivaled — $100,000 to $150,000 per job over 10 years in the densest areas. The extreme example is in the City of Camden. There is a clear strategy set forth in this amendment. We are creating such a deep level of incentive that development should come here in sufficient volume.”

All of these new programs were adopted at the end of September 2013. The New Jersey Economic Development Authority then adopted specific regulations for administering the new programs within two months.

“The amounts of incentives now available in New Jersey have become such that an investor cannot possibly ignore it,” notes Biggins. “When you look at the combination of circumstances on the New Jersey northeastern front on the Hudson River, and the level of uncertainty in New York City due to the new administration of Mayor Bill de Blasio and a lot of leases expiring in the city in the next three to four years, there will be a serious level of consideration of New Jersey by many tenants whose leases are expiring in New York City during that window.”

Biggins calls New Jersey’s new incentives program a “game-changer” and predicts that it will result in significant corporate facility investment wins for the state.

“New Jersey now has a stable, uncapped funding source and a confirmation and continued commitment to game-changing levels of incentives that in some cases are even higher than they were in the predecessor program, both on a per-job basis and in aggregate,” he says.

A Jobs Plan With Energy

Not to be outdone, Pennsylvania is responding with some major policy initiatives of its own — all designed to improve the Commonwealth’s business climate. On Jan. 21, Gov. Corbett unveiled his sweeping “Energy = Jobs” plan and pledged to help the state create hundreds of thousands of new jobs in the energy sector.

Dewitt Peart, president of the Pittsburgh Regional Alliance, says that “the Pennsylvania business climate is becoming more competitive. A capital stock and franchise tax phase-out has been proposed, and for cyclical businesses, the net operating loss carry-forward was adjusted last year,” he says.

“Plus, a state transportation bill was passed last November that brings a significant amount of money into transportation projects here,” Peart adds. “There is now some $2.4 billion a year in transportation funding that will ramp up in the state, and we are already seeing the benefits of that.”

Peart says the PRA is also leading an effort to raise money to support a Site Development Fund for the region. The goal is to make more sites available for industrial development throughout Western Pennsylvania.

“It is very unique for a region to take this on,” says Peart. “The private sector has been willing to invest in this fund. Our goal is to raise $40 million to $60 million.”