Where energy meets environment, some signals are mixed.

Among the star facilities in the Seattle 2030 District program is the Experience Music Project, designed by Frank Gehry and straddling the monorail built for the 1962 World’s Fair. An efficiency retrofit was completed in 2012 under the guidance of area sustainability experts McKinstry.
Photo courtesy of EMP
by ADAM BRUNS
T

he state and provincial governments of the Pacific Northwest already are known for their strong environmental positions when it comes to development and permitting. In October, the leaders of British Columbia, California, Oregon and Washington signed the Pacific Coast Action Plan on Climate and Energy, committing their governments to a “comprehensive and far-reaching strategic alignment to combat climate change and promote clean energy.”

The push comes even as oil logistics facilities and methanol plants from Tesoro, Shell and BP move forward in Washington, and a new federal-state partnership promises to expedite economic growth and energy project permitting.

Is it full speed ahead for corporate energy and industrial projects? Or are governments throwing down the gauntlet? It’s frankly hard to tell. Here are some signposts … but beware of arrows pointing in multiple directions.

At a meeting of the Pacific Coast Collaborative (PCC) leaders’ forum in San Francisco, Oregon and Washington signed an agreement to follow the leads of B.C. (in 2008) and California (cap-and-trade in 2013) and commit to putting a price on carbon. At the same time, PCC leaders also agreed to further develop cleaner, alternative fuels to help reduce global GHG emissions through export.

“Climate change is a global issue,” said B.C. Environment Minister Mary Polak. “By exporting natural gas, B.C. will supply growing markets with the cleanest burning fossil fuel. B.C. is now competing with jurisdictions globally to be part of this supply and has committed to having the cleanest LNG operations in the world.”

According to the province, since B.C.’s carbon tax was implemented, fossil fuel consumption has gone down by more than the national average, without affecting economic growth. Since 2008, the revenue-neutral carbon tax has raised a total of $3.7 billion.

Meanwhile, a location in B.C. just north of Kitimat is where publisher David Black aims to build a $7-billion oil refinery for export, with backing from China’s largest bank.

When the Pacific Coast Action Plan was agreed to in October, at least some business leaders liked the sound of it.

“In this time of political grandstanding and gridlock, private enterprises like ours that are trying to do the right thing are pleased by the recognition here that it really is possible to grow the economy, create jobs and still do our part as a region to fight climate change” said Steve Clem, vice president of preconstruction for Skanska USA in Portland, Ore., a company seeing business growth along the Pacific Coast.

In November 2013, Skanska USA Commercial Development Inc. announced it received a 2030 District Vision Award for being the first Seattle developer to adopt the 2030 District Challenge. The program brings together property owners and managers, local governments, businesses, and community stakeholders to provide a business model for urban sustainability through collaboration, leveraged financing, and shared resources.

“Energy is the issue of our time, and no single issue will have a greater impact on our state’s economy, environment and quality of life in the coming decade,” said Kitzhaber, while also praising the federal government’s leadership in these areas. The signing featured measures aligning Oregon’s energy efficiency standards for appliances; allowing utilities to invest public purpose charge funds in whole-building energy efficiency retrofits; and reducing the amount of coal in the state’s future energy resource mix to encourage investment in lower-carbon alternatives. 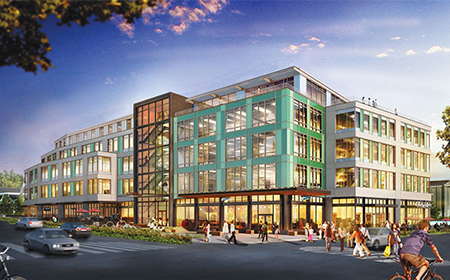 Skanska USA’s Stone34 project, under construction in Seattle’s 2030 District, is pre-certified LEED-Platinum and will provide a 75-percent reduction in water and energy use as part of the city’s Deep Green Pilot Program. Skanska’s second project in the District, 400 Fairview, is on the way.
Image courtesy of Skanska USA

Other components to the 10-Year Energy Action Plan that passed during the state’s 2013 legislative session include measures related to large solar energy project siting; an extension of the solar feed-in tariff pilot program; streamlining regulatory processes to both protect natural resources and to remove market barriers for energy development; and new wave and wind energy development.

In Alaska in January, Gov. Sean Parnell, already fighting the EPA in the Supreme Court, responded to Shell’s announcement that it would not be exploring off Alaska’s coast in 2014: “Multiple years of federal regulatory delay, litigation delay, and one year of operational issues have created barriers to Alaskans’ near-term economic prospects. Still, offshore energy development will play an enormous role in Alaska’s economic future, and I remain committed to responsibly developing our vast offshore resource basin.”

Earlier in January, a commercial “heads of agreement” (HOA) for an Alaska gasline was signed by the commissioners of Natural Resources and Revenue, ExxonMobil, BP, ConocoPhillips, TransCanada, and the Alaska Gasline Development Corp. “This commercial agreement, with its transparent set of terms, is Alaska’s roadmap to developing our vast gas reserves,” Parnell said.

However, a referendum on the oil-production tax is scheduled for August of this year, with opponents of the reform hoping to repeal it.