Corporate Headquarters Mobility Is at an
All-Time High


istorically off the table in corporate re-structuring programs, the corporate headquarters office is now in play like never before. Many of our clients over the past decade have reconfigured their manufacturing operations (both off-shoring and re-shoring) and have redeployed their distribution facilities in response to events like Nafta, soaring fuel costs, the Panama Canal expansion and the rise of intermodal transport. These same clients have also decentralized many of their administrative support functions from their traditional home at the head office to free-standing, shared services sites in lower cost cities.

As companies continue to examine their bottom line in response to global competition and the slow economic recovery, their focus is increasingly turning to the remaining piece of the restructuring equation: the corporate headquarters site. Pent-up demand from companies that have put head office moves on hold since the 2008 financial crisis is another driver here.

Head office mobility is not going unnoticed by politicians and economic development practitioners. For good reason, they view the corporate headquarters as the gold standard in industry attraction given the prestige, human capital and economic stimulus a new head office brings to a city. Financial incentives crafted specifically to help attract corporate headquarters are now commonplace among states competing for this holy grail of economic development.

Elite cities in the corporate headquarters sweepstakes such as Atlanta, Dallas, Charlotte and Houston wait anxiously each May when Fortune Magazine publishes its list of Fortune 500 companies to see how many they can claim as their own. This May tally — and how it compares with totals of traditional corporate headquarters meccas — New York, Chicago, Boston — is valuable ammunition for these foot soldiers in the national tug-of-war for new corporate headquarters.

The five major selection factors guiding the headquarters hunt have not changed much over the years, although their interpretation and ranking has. The five factors we explain to our clients is a take on the old British fox hunting term “Tally Ho.” Our acronym — TALIO — stands for Talent, Access, Lifestyle, Incentives and Operating Costs.

Of the five-site selection drivers, operating costs have gained the most in importance in recent years given the slow economic recovery and the fact that our clients are all taking a world view of their competitive cost structures (see figure 1).

Many of our clients’ current headquarters were designed for workplace standards dating back 20 or more years. Today’s collaborative workspaces and technology that allows mobile employees to work from anywhere have translated into much smaller head office footprints.

For some of our projects, the average sq. ft. per office worker requirement has dropped from as high as 250 sq. ft. to as little as 125 sq. ft. Worker requirements are also trending downward due to automation, the cloud and the growth of remote shared services centers performing back office functions traditionally housed at the more expensive corporate headquarters site.

Also trending today is the decline of the sprawling suburban headquarters campus in favor of a more urban setting, one showing special appeal to young, upwardly mobile professionals. This is especially evident among tech companies like Google, Amazon, Pinterest and Facebook who are carving out tech enclaves in downtown office markets in San Francisco, New York, Chicago, Pittsburgh and Seattle. Also, demographics point to highly educated workers clustering in a select number of U.S. cities. As young, dual-career professionals marry and start families later than previous generations, they’re delaying or rejecting altogether moves to the suburbs.

In New York City, the hot Flat Iron District is being joined by a new urban head office enclave, namely the Hudson Yards development where Time Warner, Coach and L’Oreal are moving their headquarters. Time Warner’s huge 5,000‐worker announcement is giving added traction to this new business and residential district, much the way it did when the media company moved to Columbus Circle a decade ago.

One major exception to the urban headquarters trend is Atlanta, where head offices continue to trend to the metro area’s suburban office markets along its northern perimeter. Atlanta’s affinity to the automobile and high profile rejection of a public transit referendum last year keeps suburban office markets such as Buckhead, Central Perimeter and the Northwest in play as seen in the recent headquarters relocation of Pulte Group from Detroit to Atlanta’s Buckhead along with other major suburban office investments by State Farm, Geico, PointClear Solutions, FiServ and others.

Other smaller market suburbs that we see bucking the urban headquarters trend include Carmel outside of Indianapolis, Dublin near Columbus, Ohio, The Woodlands near Houston, Roseville outside of Sacramento, Miramar outside of Miami, the Ann Arbor area, the Summerlin office market near Las Vegas, Owings Mills outside of Baltimore and the Englewood area of Denver.

The urban head office trend is leaving millions of sq. ft. of suburban corporate headquarters space vacant and functionally obsolete. This surplus space left behind by companies that have relocated, re-engineered themselves or gone out of business is scattered throughout the country, but heavily concentrated in states like New Jersey, Ohio and Connecticut.

The poster child of suburban excess is the former headquarters of Bell Laboratories in Holmdel Township, N.J., not far from us here in Princeton. The massive 1.9-million-sq.-ft. Eero Saarinen-designed glass office structure sits on 472 acres has been empty since 2007. The former head office is now being redeveloped by a leader of the new urbanism movement, Ralph Zucker, as a mix of retail, restaurants, housing, offices and a spa.

Other vacated corporate head offices are also finding new life. In Akron, Ohio, the former Goodyear headquarters is being resurrected by the noted California developer, Stu Lichter, who is converting Goodyear’s 1.7-million-sq.-ft. mishmash of brick and concrete buildings into hotel rooms, housing, modern office space and other uses, including a new site for the local community college.

Trend-Setting Corporate Headquarters Moves and What They Tell Us

Since the 1970s, our firm has witnessed a number of trend-setting corporate headquarters relocations that served to tell a bigger story than just the companies and cities The urban head office trend is leaving millions of sq. ft. of suburban corporate headquarters space vacant and functionally obsolete.involved. They provided a window into the economy and emerging site selection trends that would impact other corporate moves. Some of the more telling headquarters moves include:

One Big Idea, One Better City

andy Springs is one of the best places in the U.S. to do business. Located in Atlanta’s dynamic metro north and less than an hour from the world’s busiest airport, the second largest city in the metro Atlanta area offers ready access to domestic and global markets, a highly educated work force, choice of fine homes and good schools. A robust community of Fortune 500 corporations, mid-size companies, and new businesses enjoy a low tax rate and award-winning municipal services. The City balances the best of modern southern living: high-rise towers and riding stables, world-class medical center and national river corridor, international consulates and neighborhoods that resemble botanical gardens.

Lighting the skies with the City’s annual fireworks display. 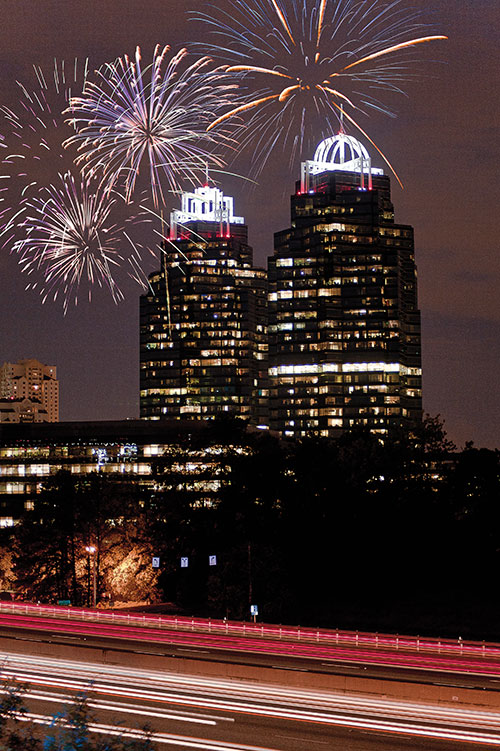 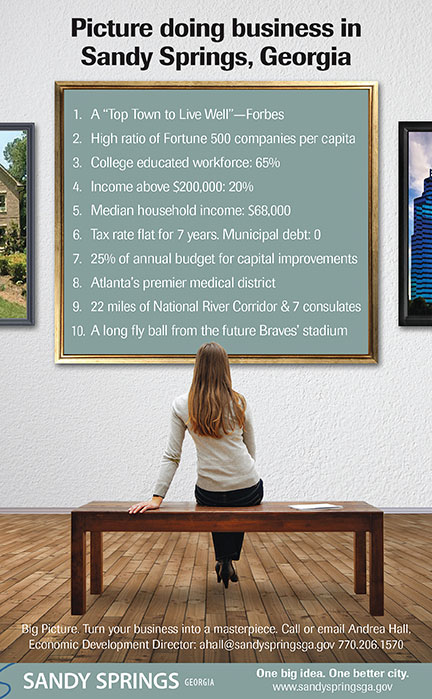 With an extensive local road access to Interstate 285, Georgia Highway 400 and access to 3 MARTA stations, Sandy Springs makes a great choice for business service providers. Perhaps that is why Sandy Springs has one of the highest ratios of Fortune 500 companies per capita in the U.S., including the worldwide headquarters for UPS and Newell Rubbermaid. Other headquartered companies include In addition, UPS, Newell Rubbermaid, Graphics Packaging, and Cox Enterprises.

Metro Atlanta has is now recognized as one of the top three locations for technology companies, from information security to financial transaction processing. And Sandy Springs is at the center of this growth, due to access to a highly-educated workforce and the transportation infrastructure to get them to work.

In Sandy Springs, residents get the best of both worlds; they can live a relaxed life in a tree-lined setting while still being able to take advantage of the City’s urban amenities. Forbes ranked the City as one of America’s Top Towns to Live Well. Sandy Springs boasts nationally recognized public schools and world-class private schools, ensuring all students in the area the opportunity to receive a quality education. The City is served by 7 public elementary schools, 2 public middle schools and 2 high public high schools. In addition, there are 41 private schools that serve the area.