Bauer Corp. steps up. So does Wooster, Ohio, claiming No. 1 Micro. 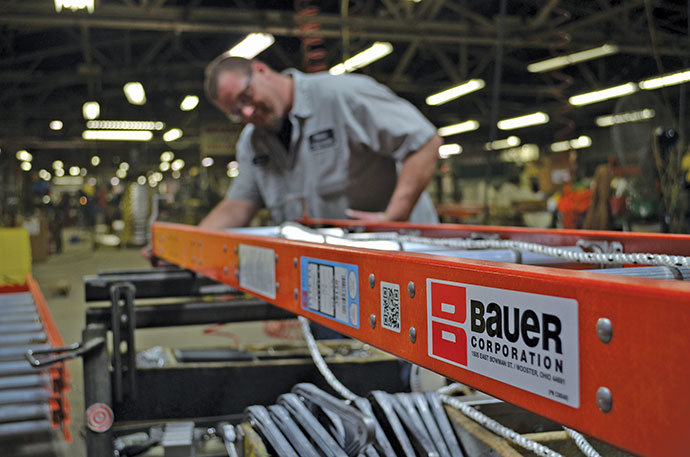 he last exclusively domestic ladder manufacturer in the US helped Wooster, Ohio, claim a title it’s been chasing for a long time: Top Micropolitan Area in America.

By recording more corporate facility projects than any other small-town area in the US in 2013, Wayne County captured a crown that had eluded it for decades.

At the center of this win were manufacturing companies like Bauer Corp., which overcame tremendous odds to widen its footprint in America while its competitors were bolting for cheaper options abroad.

Marc McConnell, president of Bauer, says he wouldn’t have it any other way. 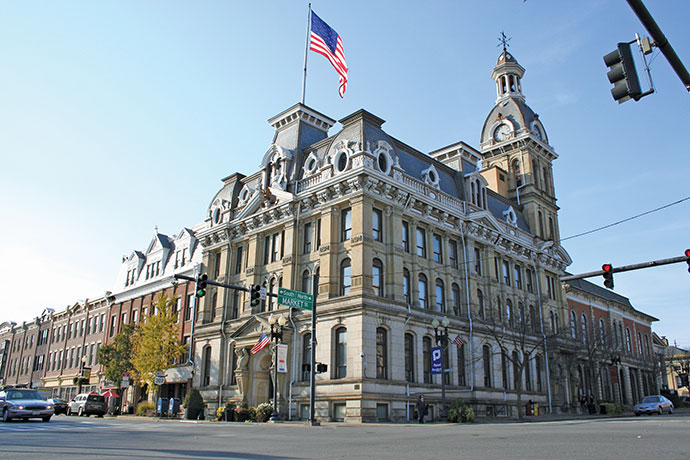 The historic Wayne County Courthouse in Wooster stands as one of Northeast Ohio’s signature works of architecture.

“Our business has been in Wooster in Wayne County for nearly 100 years,” McConnell says. “We have a lot of skilled labor that has been with the company for a long time. That was the big driver of our most recent expansion. We wanted to retain the workforce that we have there.”

Bauer’s was one of 27 corporate facility projects announced in the Wooster Micropolitan Area last year, propelling Wooster to the No. 1 spot for the first time in history of the northeastern Ohio community.

Wooster outdistanced second-place Tupelo, Miss., which recorded 19 facility projects, followed by Cullman, Ala., with 18, Findlay, Ohio, with 15, and Morgan City, La., with 11.

The US Census Bureau designates a micropolitan area as a non-urban community anchored by a town of no more than 50,000 people. There are 576 micro areas in the country, according to the Census Bureau.

Wooster’s performance was a bellwether for Ohio, which led the nation by having 15 micro areas ranked in the top 100. Five of them — Wooster, Findlay, Fremont, Tiffin and Wilmington — ranked among the top 10.

Georgia and Michigan were next on the list, each with nine micro areas in the top 100, followed by North Carolina and Tennessee, which each had eight.

Wooster has been a perennially strong performer, recording multiple runner-up finishes and numerous top 10 appearances in the micropolitan category over the years. Its strength is its tradition of skilled manufacturing.

A Bumper Crop of High-Growth Firms

Rod Crider, president of the Wayne Economic Development Council, says that the Wooster area economy is driven by “the great diversity of businesses in our county. Clusters of varied industries are here. Secondly, we have a great spirit of collaboration here between the public and the private sector. There is no competition between the government and economic development organizations. We are very well aligned in terms of what we are trying to do here, especially in a smaller community.” 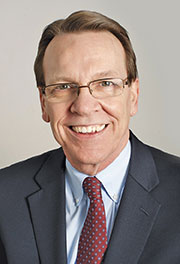 "Wayne County is a tremendously diverse community with a level of business sophistication that some executives might not expect to find in an agricultural community.” 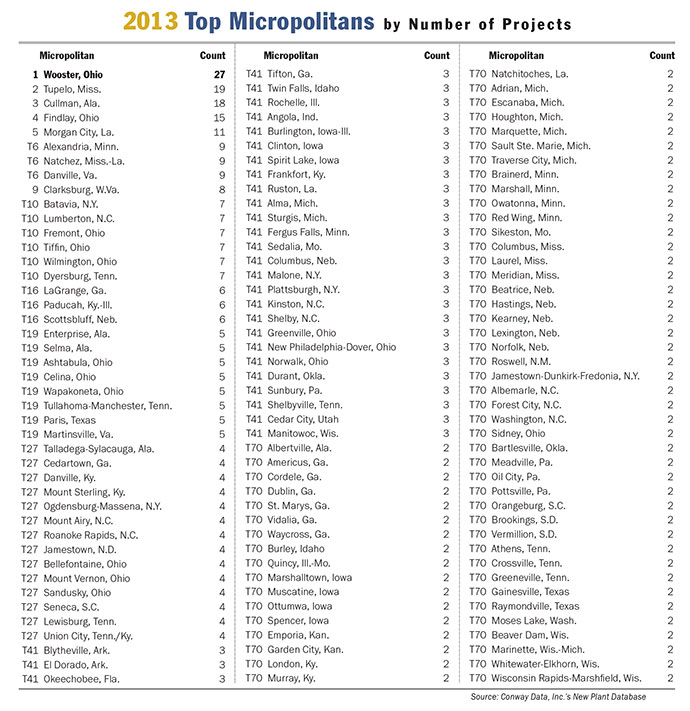 "We have been headquartered in Orrville for over 115 years and we have been very proud to call Wayne County home.”

Wooster, with 26,000 residents, is the largest city in Wayne County, which has 115,000 people. The main industries in Wayne are food processing, automotive parts manufacturing, agriculture and ag-bioscience, and titanium metal fabrication.

Wayne is the No. 3 county in Ohio in overall farm production and No. 1 in Ohio in dairy production. J.M. Smucker, Frito-Lay, Gerber Poultry and Daisy Brand are the largest food-processing operations in the Wooster-Orrville area.

Located 50 miles south of Cleveland, Wooster was established in 1808 and was named after David Wooster, a general in the American Revolutionary War. A longtime leader in agriculture and ag-bioscience, Wooster was named one of North America’s Top 10 Micro Cities last year by fDi magazine.

The area’s rich tradition of advanced manufacturing and innovation has spawned such entrepreneurial startups as quasar energy group, Cureo, ABSMaterials and 3i-ingredients.

Downtown Tupelo, Miss., is historic and full of life all at once. The area placed second in this year’s Top Micropolitan rankings.
Photo courtesy of Mississippi Development Authority

“Wayne County is a tremendously diverse community with a level of business sophistication that some executives might not expect to find in an agricultural community,” says Crider. “People come here and see a thriving downtown area and several high-end restaurants. We were the original home of the Rubbermaid company. They brought a lot of people from around the globe to Wayne County. So has Smucker’s. So has Ohio State University, and so has the College of Wooster.”

Higher education is a strong suit in Wooster, which is home to two subsidiaries of OSU: the Agricultural Technical Institute and the Ohio Agricultural Research and Development Center, a teaching and research facility dedicated to agricultural science.

The College of Wooster hosts the Ohio Light Opera, a professional opera company that performs a myriad of light operas, including Gilbert and Sullivan and a variety of American and British operas from the late 19th and early 20th centuries.

In more recent times, Wooster has distinguished itself as a hotbed of industrial expansion. McConnell’s Bauer Corp. is a notable example.

At a time when other American ladder makers saw greener pastures in Mexico, Bauer forged ahead with aggressive growth plans in Wooster.

“We make fiberglass and aluminum step and extension ladders,” says McConnell. “We are the last exclusively domestic ladder manufacturer in the country. Louisville Ladders moved to Mexico 10 years ago. Others who are based here still import a lot of their stuff from Mexico. We are the only ones that are straight-up US-made. As a result, we have to concentrate on having better features and better quality. We have our niche, and our business has grown quite well.”

The Wooster area workforce is a big reason behind that growth, he notes.

“In our experience, the work ethic and general sentiment of the employee base in Wooster is better than what we find elsewhere,” McConnell says. “Clearly, other companies must be finding the same to be true, as evidenced by all the other expansions and new plants going up in the area.”

McConnell says that Bauer looked at other communities before deciding to expand its manufacturing operation in Wooster.

“We own buildings that are vacant in other states, and we looked at them,” he says. “We decided it was more important to keep this operation in Wooster. We did not see being able to replicate the workforce elsewhere.” 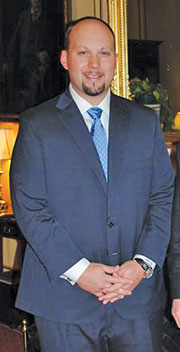 “In our experience, the work ethic and general sentiment of the employee base in Wooster is better than what we find elsewhere.”

Bauer considered options at available buildings it owns in North Carolina and Upstate New York. “We have available manufacturing space in both locations,” he adds. “North Carolina is pretty aggressive. It would have been a natural place to locate a plant. But those factors could not overcome the fact that Wooster is so good. Our plant in Wooster has the lowest turnover and fewest employee problems — lost time, attendance, injuries, etc. — of any of our plants.”

McConnell adds that “we have a great relationship with our employees there. It is a great Midwest community — and that is not true of every Midwest community where we are located. The Wayne EDC was pretty aggressive and they spent a lot of time with us. They communicated with us all along the way and they were very proactive.”

But the largest investment came from Daisy Brand, which announced a $116-million facility project in Wooster last June.

The 200,000-sq.-ft. (18,580-sq.-m.) dairy product plant will create up to 89 new jobs in the community over the next several years, according to Chris Blase, operations manager for Daisy Brand.

“The plant location is good for expanding Daisy’s product distribution,” Blase says. “The ability to procure milk and cream from local sources is also important.”

“Daisy focuses on the long term, so the incentives were important but not a deal-breaker,” he says. “All parties — including the Wayne EDC and Jobs Ohio — were helpful and supportive.”

Labor was the deal closer, he adds. “The local area has higher-level education,” says Blase. “That fact, coupled with the area’s agricultural focus, plays well with our manufacturing needs.”

“We have been headquartered in Orrville for over 115 years and we have been very proud to call Wayne County home,” says Maribeth Burns, vice president of corporate communications for Smucker. “The decision to create a state-of-the-art manufacturing plant in Orrville represented one of the biggest investments in our company’s history.”

She adds that “the campus expansion projects were the result of a restructuring initiative a couple of years ago, especially in our fruit spread business. It allowed us to double the manufacturing capacity of the items that were produced at the old plant.” 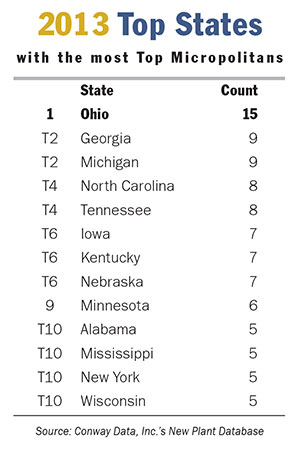 The labor pool underpins the company’s strength in Northeast Ohio, says Burns. “The company has always been impressed by the strong Midwestern values and work ethic of this region,” she says. “Wayne County provides a well-educated workforce. We have strong partnerships with many of the local universities — Akron, Ohio State, Kent State and others. We have great feeder programs at these schools. We have great access to talent throughout the region.”

Burns notes that Ohio’s Job Creation Tax Credit “was a great value to these projects. Both state and local government had a great investment in this project. We greatly appreciate the strong partnerships that we have with the local government officials and the Wayne EDC.”

Crider says Wayne County provides the proverbial best of both worlds to employers. “We have a great rural environment and a great quality of life,” he says. “Access to urban amenities is close by. I think that is what surprises people the most when they come here.”

Located in the heart of Amish country in east central Ohio, the Wooster area provides a base of skilled labor that can be hard to find in other rural communities, says Crider.

“We have a great rural environment and a great quality of life. Access to urban amenities is close by.”

“There are 11 school districts across the county. They are a great source of workers coming into the labor force here,” he says. “Plus, we are near other major metropolitan areas, like Akron-Canton, Cleveland and Columbus. We can draw people from those counties to work in Wayne County. About half of our workforce comes from neighboring counties to work here every day. We have a very large labor pool to draw from within the region.”

Unlike many Midwest small towns, Wooster is actually growing. It has a median age of 39.2 and its population is set to grow by 2.8 percent over the next five years.

Crider notes that while “finding skilled workers is a challenge for many manufacturing companies in America today, we are directly addressing that here with our local career center, local school districts, local social service agencies and workforce board, and the Ohio workforce development system.”

Now that the Wooster area has captured the crown as America’s top micro, Crider says the community will bask in its win but not rest on it.

“To have an opportunity to be among the top communities has made us work harder, and we want to maintain that,” he says. “Now that we have placed number one, the standard has been set even higher for us.” 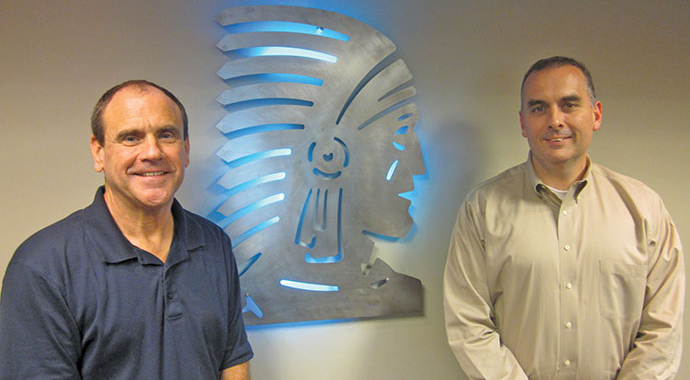 James J. Connor (left), president and CEO of Tecumseh Products Co., told Site Selection the people at the company’s plant in the Tupelo-area town of Verona are “a notch above anybody making compressors in the world,” which is why the company is expanding and refurbishing the facility, and reshoring condensing unit production there too. “Everybody’s excited,” said Joe Kulovitz (right), the plant’s general manager. “We’re doing something new.”
Photo by Adam Bruns